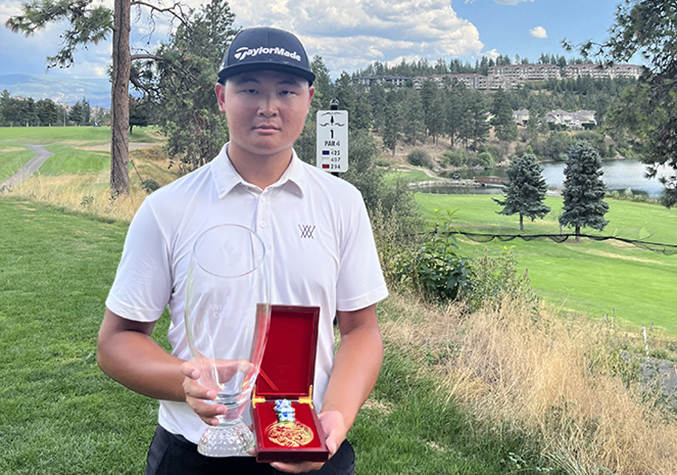 Tiger Woods used to talk about winning without his ‘A game.’ Daniel Xu can relate to that.

The 16-year-old Richmond resident certainly did not have his best stuff in the final round of the B.C. Juvenile Boys Championship at Shannon Lake Golf Course in West Kelowna.

But Xu found a way to win, although it did take three extra holes to do it.

Xu prevailed over Victoria’s Maguire Lines on the third hole of a sudden-death playoff to claim the championship for players aged 16 and under. He heaved a heavy sigh of relief when it was over. “It was rough,” Xu said. “It got really hot during the day and my head wasn’t really in the right space. But I got it in the end, so it feels good.”

Xu and Lines finished the 54-hole event at three-over par. Lines closed with an even-par 70, while Xu shot a sloppy 73. He was battling his swing most of the day. “I definitely couldn’t keep the swing together for a bit,” Xu said. “Everything was going left. Then I figured it out in the end.”

Xu, who is heading into Grade 12 at Hugh McRoberts Secondary in Richmond, looked like he was going to hang on and win it in regulation. But things changed on the 17th hole. Lines, playing in the group ahead of Xu, birdied No. 17, while Xu made a bogey. Suddenly they were tied at three-over. Pars on 18 sent them to extra holes.

After both players parred the first two playoff holes, Xu won it with a par on the third extra hole after Lines chunked a chip and could not get up and down for par. “On the third playoff hole I hit a solid tee shot and had 40 yards in and chipped it to maybe six feet,” Xu said.

After Lines missed his par putt, Xu knew he could two-putt from six feet and win. “I took it a little bit safe to get that par,” said Xu, who plays out of Richmond Country Club. “It was a downhill putt and I didn’t want to hit it too far.” Xu said his putter was about the only club he felt he could rely on all week. That was important on Shannon Lake’s challenging greens, which have plenty of slope.

“My putter was good to me,” Xu said. “I definitely made a lot of putts this week. That was really the only thing that was keeping my game together. My swing was kind of feeling off the entire week. I definitely have some work to do, but I’m really happy to get this win.

“This was my final year of eligibility for this event so I kind of came here with a winning mindset. This win means a lot, honestly. I have struggled recently coming off an injury and trying to get my swing back together. It feels great to win.”

Manpreet Lalh of Nanaimo just missed making it a three-way playoff. He missed by one shot and finished third at four-over after closing with a one-over 70. Isaac Lee of Hong Kong was another shot back at five-over after his final round of even-par 70.

Xu headed home with two trophies. He and Isaac Lee won the two-person best-ball competition with a score of 12-under par. Three teams — Amy Lee of Langley and Cadence Ko of Richmond, Mack Sanderson of Creston and Samuel Kurytnik of Nanaimo and Maguire Lines of Victoria and Thomas Zhang of Vancouver— tied for second at 11-under par.

A 36-hole Zone competition concluded Wednesday with the Zone 6 team of Zachary Auramenko of Campbell River, Mack Sanderson of Creston and Samuel Kurytnik of Nanaimo winning with a score of 16-over.

CHIP SHOTS: Xu will be playing in the Vancouver Golf Tour’s Vancouver Open, which goes Aug. 19-21 at the three City of Vancouver courses. . .George Zhou of Vancouver shot a tournament-low three-under 67 in the final round. . .Next year’s Juvenile Championships are scheduled to be played at Highland Pacific Golf Course in Victoria.