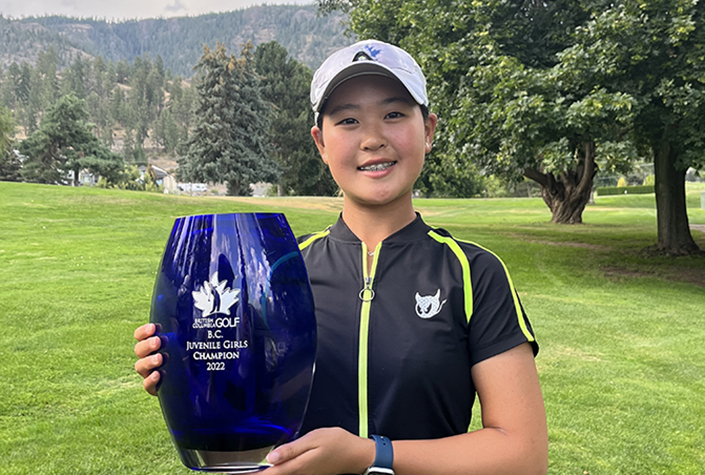 Amy Lee has been knocking on the door all summer and she finally broke through it by winning the B.C. Juvenile Girls Championship at Shannon Lake Golf Course in West Kelowna.

She sealed the deal at Shannon Lake with a final round of one-under 71 that left her at three-under par for the 54-hole event. That was good for a one-shot win over Chelsea Truong of Victoria.

Lee and Truong had turned the championship for players aged 16 and younger into a two-player race. They were tied for the lead heading into the final round with a four-shot cushion on the rest of the field.

Lee grabbed a lead she would not relinquish with three straight birdies early in her round on holes 2, 3 and 4. “That really helped give me some momentum because I had a birdie putt on the first hole, but I missed,” Lee said. “So I was determined to push forward and on 2, 3 and 4 my putts went in. That really got my round off to a nice start.

“I can’t lie that I wasn’t nervous at the start of my round but once I got into my shot I tried not to think about it and those three straight birdies early on just helped me be even more focused.”

Lee had six birdies in her round and most of them were from close range, set up by great iron play. All but her final birdie on the 15th hole came from inside eight feet.

Truong, meanwhile, was stringing together lots of pars. She opened her round with eight straight pars before bogeying No. 9. She then had eight more pars before birdieing the 18th hole. That birdie combined with Lee’s bogey on No. 18 narrowed the margin to one shot.

Lee said she had no idea she had won until Truong congratulated her on the 18th green. “I actually didn’t keep track of the scores, but I had a feeling Chelsea and I were pretty close,” she said. “I really tried not to think about where I stood because for me the more I think about my scores, the more my shots and putts won’t turn out good. On the 18th green, when we were all hugging and finishing things off, Chelsea said congratulations, and that’s when I knew I had won.”

Lee, who is heading into Grade 9 at Walnut Grove Secondary in Langley, plays out of Pitt Meadows Golf Club. She said the Juvenile Championship win makes for a pretty satisfying summer. It also helps ease the sting of her one-shot loss to Burnaby’s Luna Lu at the B.C. Junior Girls Championship. “I think my summer has been pretty good compared to the past couple of years because I have been changing my swing and my putting and all that stuff,” she said. “I have just been trying some new things.”

Lee called Shannon Lake a challenging course. “The course wasn’t easy,” she said. “Some of the pin placements were in challenging spots. I think a lot of players here had a tough time with that. But I did a good job of placing my ball in the right spots on most of the greens. I think that was really important.”

This is Lee’s second provincial championship. She won the 2021 Bantam Girls Championship last summer in a playoff at Langara Golf Course in Vancouver. “With all the tough competitors here, this one feels really amazing,” she said. “I am really honoured to win this title.”

Cadence Ko of Richmond finished third at seven-over par, one shot better than June Hsiao of Coquitlam. Lee almost won a second title at Shannon Lake. She and Cadence Ko finished in a three-way tie for second in the two-person 54-hole better-ball competition, one shot behind the winning team of Daniel Xu of Richmond and Isaac Lee of Hong Kong. Xu and Lee won with a score of 12-under par.

A 36-hole Zone competition concluded with the Zone 6 (Upper Vancouver Island) team of Zachary Auramenko of Campbell River, Mack Sanderson of Creston and Samuel Kurytnik of Nanaimo winning with a score of 16-over.