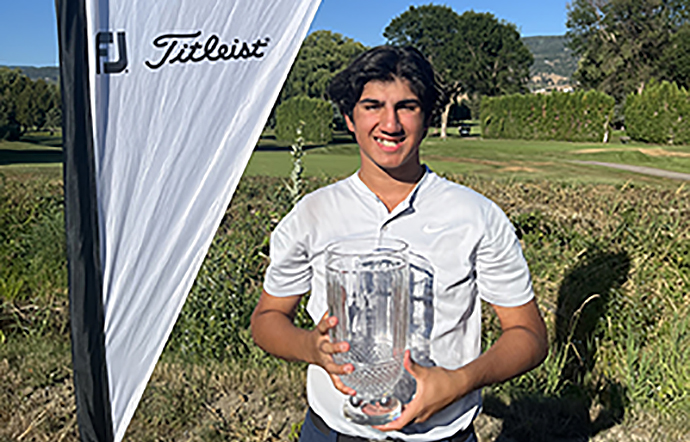 After he tapped in his three-foot putt to win the B.C. Bantam Boys Championship at Shadow Ridge Golf Club in Kelowna, it took Arav Pabla a brief moment to realize what he had accomplished.

“This feels really good,” said the 14-year-old Victoria resident. “I just walked in here with a positive attitude thinking I could win and I did. After we finished the playoff I realized I had won a provincial championship. That’s crazy.”

Pabla won that playoff with Surrey’s Sukhraj Gill on the first extra hole to win the championship for players aged 14 and under. Pabla got into the event just under the wire as the soon-to-be Grade 10 student at Belmont Secondary turns 15 in a few days.

Both players finished the 36-hole event at one-over par. Jerome Goddard, British Columbia Golf’s tournament director, decided to start the playoff on a par 3 — the 150-yard sixth hole at Shadow Ridge, which played as No. 15 during the tournament. Visually, the hole is a little intimidating as it is fronted by a pond.

“Heading into the playoff I was just thinking hit the green and two-putt and if he makes birdie what can I do,” Pabla said. “My mentality was to just get it on the green.”

He did just that, depositing his tee shot about 35 or 40 feet left of the pin. Pabla then watched as Gill found the water with his tee shot. “Obviously Suk was very unlucky,” Pabla said of his opponent. “He kind of pushed it out right and it fell short.”

After taking his drop, Gill’s third shot came up short. By the time Pabla was standing over his three-footer he knew he didn’t have to make it for the win. But he rolled it in to earn the biggest victory of his young golfing life. “This really motivates me,” said Pabla, who plays out of Bear Mountain. “I really want to do better in some of the bigger tournaments. This makes me feel like I can be there easily.”

Pabla had three birdies in his closing round of 72. He birdied his first hole, which helped settle any nerves, when he rolled in a 25-footer. He added his second birdie on the par 4 eighth hole with an uphill putt of about 20 feet. His final birdie came on the par 4 14th hole where he drained a 10-footer.

He said his putter was one of the keys to his win. “I wasn’t hitting my irons too close to the pins, but my putting really saved me,” he said. “I had to get up and down a lot.” Gill also had three birdies in his round of 73, but was hurt by a pair of double-bogeys on the front nine and a bogey on the final hole that forced the playoff.

Aidan Lu of Richmond finished third at two-over par, while Oscar Yu of West Vancouver was fourth at three-over.

A Novice championship was also held for players aged 12 and under. Jason Yu of Surrey won the Novice Boys Championship with a 36-hole score of 10-over par. That was one shot better than Ewan Baldwin of Victoria and Jayden Hx Zhu of Surrey.

A two-person better-ball competition was won by the team of Haarjun Lotay of Burnaby and Tierra Elchuk of Kelowna. Their score of 24-under par was three shots better than the runner-up team of Lucas Lin of West Vancouver and Richie Chung of Vancouver.