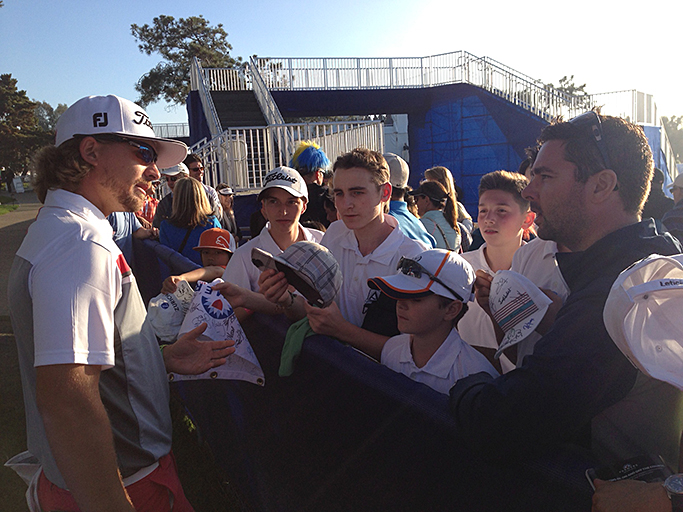 By the time the final putt dropped on another brilliant day in Northern California and Brandt Snedeker won the AT&T Pebble Beach National Pro-Am for the second time in three years, the best British Columbia golfers had already hightailed it out of the Monterey Peninsula.

Abbotsford’s Adam Hadwin and Nick Taylor will be getting ready to play practice rounds at Riviera for the Northern Trust Open this week while Roger Sloan is back in Houston to work on his game in anticipation of his next PGA TOUR stop, hopefully in Florida.

Victoria’s Cory Renfrew will be trying to Monday qualify for Riviera with a 12:55 p.m. tee time alongside Billy Mayfair and aspiring PGA TOUR pros Ryan Williams and Adam Cornelson will be planning their Web.com schedules for the spring.

After three weeks covering this golden generation of British Columbia golf professionals, this much is clear: It’s a roller coaster ride of emotions for these young men as they pursue their golf dreams.

Let’s start with Renfrew, the unlikeliest of successes. It’s not like Renfrew isn’t talented enough. It’s that without status on the PGA TOUR, he has to play Gateway Tour events in Arizona and bide his time for the few opportunities that come his way.

In Phoenix, Renfrew would shoot a (-6) round of 66 at McCormick Ranch to Monday qualify for the Waste Management Open in Scottsdale.

Coach Matt Palsenbarg of Surrey would fly down to work with Renfrew as the Victoria native made the cut and cashed a nice cheque after shooting a (-6) round of 66 on Sunday at the TPC Scottsdale.

The highlights for Renfrew had to be coming through the tunnel at 16 on both Thursday and Sunday to make birdie while 20,000 screaming fans quaffed beer in his honour.

Renfrew’s success is envied by both Williams and Cornelson, who are also trying the Monday qualifying route, but with much less success.

Williams, ever positive, shot a (-3) round of 69 at McCormick Ranch, but he knew that wasn’t going to be good enough, especially with a field that includes former Major and PGA TOUR champions in the field.

Williams is happy to get the experience playing on Monday because he figures he’ll have to do more of that to get into Web.com events, especially since his conditional status there won’t guarantee him many starts.

Cornelson is another step below, with only PGA Tour Canada status so any opportunity to work on his game alongside PGA TOUR professionals is a learning experience.

Cornelson has an additional step, the Thursday pre-qualifier, that he has to pass just to get into Monday qualifiers, so the hill is indeed steep for the Langley native.

For Merritt’s Roger Sloan, having a PGA TOUR card looks good to golf fans, but in reality, his life is more about uncertainty. Sloan made the cut in San Diego, cashing a nice cheque for just under $14,000 that will cover his expenses, but he had a nightmarish time at Pebble Beach, highlighted by one hole in particular.

To set the stage, Sloan was sitting at (+4) when he played his 36th hole, the iconic 18th at Pebble Beach.

With the cut coming at (-7) a day later, Sloan wasn’t realistically going to make the cut, but it became a certainty when Sloan couldn’t hit the fairway at 18, banged his ball amongst the rocks on the left, took two penalties and walked off with a tidy 11 on the hole.

His closing (-2) round of 69 at Monterey Peninsula Saturday saved some face and allowed Sloan to joke on Twitter: “It took Jim Furyk 19 less whacks to play Pebble today than it took me yesterday. He must have hit the fairway on 18.”

Sloan now enters an uncertain next month, as he won’t draw into Riviera, is unlikely to get into the Honda Classic, doesn’t qualify for the World Golf Championship at Doral and may have to play in Puerto Rico, in an opposite field event, for his next Tour stop.

It’s all part of paying your dues as a rookie on the PGA TOUR and Sloan, accompanied by wife Casey, knows there’s nothing else he’d rather be doing (save making another 11 at Pebble’s 18th).

Abbotsford’s Adam Hadwin can look positively toward Los Angeles because after missing the cut at his “hometown” Waste Management Phoenix Open, he cashed a decent cheque in San Diego despite having a lot of trouble finding the clubface on his driver.

Hitting what he calls 'slap fades' just to keep the ball in play, Hadwin is showing that he can think himself around the course even when he doesn’t have his best game.

With the freedom to choose his own schedule this year, courtesy of getting the best priority number out of his Web.com success, Hadwin could afford to take Pebble Beach off.

He could also spend a little of his hard-earned cash and take brother Kyle and son Gerry to the Super Bowl, where they cheered on the New England Patriots to victory.

That wouldn’t go over well with Hadwin’s soon-to-be-ex-roommate, Nick Taylor.

Taylor and wife Andie also went to the Super Bowl in Phoenix, but left shattered when the Seattle Seahawks were stopped one yard away from a spot in football immortality.

Back on the golf course, Taylor has accomplished more in his rookie season than he could have dreamed off, winning in Mississippi in November, which gives him an exemption on the PGA TOUR until the autumn of 2017.

Taylor would make the cut in Phoenix, cashing a cheque and having the bigger worry of getting to Glendale for the Super Bowl (Andie and him got shuttled there just in time for kickoff).

Taylor wouldn’t have that magic at Pebble Beach, as an opening round (+4) round of 76 at Spyglass Hill doomed him to a missed cut when the best he could do over the next two days was get back to even par.

As for San Diego, Taylor took the week off so that he and Andie could house-hunt in Scottsdale, all part of the perks of cashing the winner’s cheque from Sanderson Farms.

What does this tell us about the BC golfers on the PGA TOUR? Well, they’re learning together as rookies on the PGA TOUR. Their friendships seem to have survived the rough-and-tumble world of professional golf and whenever you run into one of them on the course, they’re more apt to ask you how the others are doing.

They also cheer wholeheartedly for the other Canadians on the PGA TOUR, as David Hearn was top Canadian at Pebble Beach with his (-13) score, which was only good enough for a Top 25 finish, and Graham DeLaet sandwiched rounds of 76 with 65 and 64 to finish at (-6) for the tournament.

And we can’t forget former Masters Champion Mike Weir, whose time on the PGA TOUR may well have passed – he’s missed six of seven cuts this year – but he’s showing some serious elder statesman leadership, organizing practice rounds for fellow Canucks like Renfrew.

It’s all the more reason to keep your eye on the PGA TOUR each week, as one or more of the local products is apt to catch fire at any time. The future of British Columbia golf on the PGA TOUR is bright indeed.