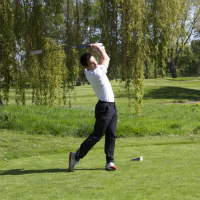 As a proud partner of the ASPAC Club, British Columbia Golf was on hand at Richmond Olympic Oval on Wednesday, May 14 as the club announced three-time World Champion figure skater, Patrick Chan, as honorary member No. 1.

Following a press conference with the two-time Olympic silver medalist, British Columbia Golf was honored to enjoy lunch and a short round of golf with Chan at Quilchena Golf and Country Club.

Though as you’d expect, Chan dedicates an incredible amount of time to training, but he is also an avid golfer and said he still likes to play as often as possible.

“I’ve played golf since I was young. It’s been a sport that I’ve always admired and it’s one of my hobbies for sure,” said Chan.

“It’s such a great game to play and I’ll definitely be taking advantage of that connection and use British Columbia Golf to play in BC and also back home in Toronto.”

Currently Chan is on tour across Canada with Stars on Ice but took some time to relax on the course with British Columbia Golf President, David Atkinson, Executive Director Kris Jonasson, and Raymond Li, ASPAC Development Ltd. Senior Vice-President.

Chan explained that he began golf lessons when he was young, and despite spending the majority of his time on the ice, has never forgotten how much he enjoys the links.

“When you learn something when you’re young you don’t forget it,” Chan said expressing that taking lessons early helped him develop technically to maintain a strong golf game.

His well-founded game was proof that learning to golf young can help build a foundation to continue improving, even when playing recreationally.

Being a world-class athlete probably doesn’t hurt either.

British Columbia Golf partnered with the ASPAC Club as a means of growing the game of golf by helping to introduce residents of ASPAC condominiums to golf clubs in the area, increasing membership and involvement in the sport of golf at a recreational level.

ASPAC is a real estate development company that prides itself on not only on developing condominiums, but also on building communities. A number of local businesses and corporations form the ASAPC Club to help strengthen those communities.