Melanoma And Me: A Cautionary Tale Of My Life In The Sun 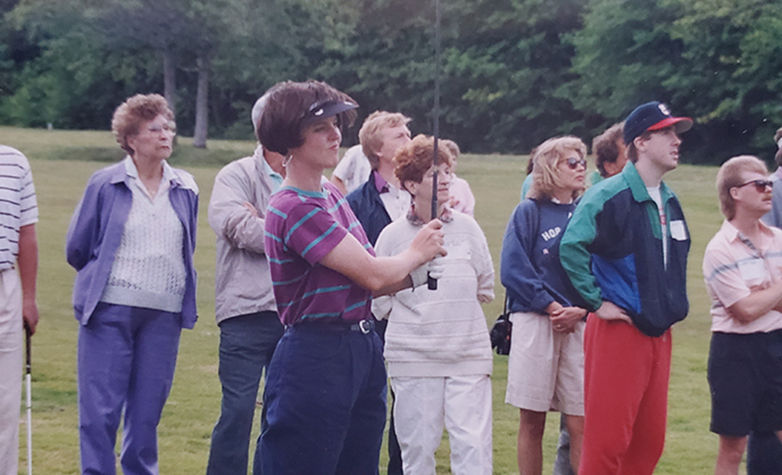 I grew up in Kitimat, a small, isolated town in Northwestern British Columbia. Winters were exceedingly long and gargantuan snowfalls were the norm. Summer seemed to stop by for a short visit and then disappear as quickly as it arrived.

I wasn’t quite 11 in the spring of 1978 when golf was introduced to me. I most definitely did not display any natural talent for the game at all, but it would soon become the centre of my universe.

I've never been the sun worshipping type. The pursuit of a tan was not conducive to my pasty, fair skin and blue eyes. As it happens, chronic sun exposure and playing golf go hand-in-hand. I have burned, blistered and peeled so many times that it’s a wonder that I have any skin left.

In the span of 34 years, competitive golf has taken me to just about every province in Canada, all over the USA, and to Australia, the country that has the dubious distinction of having the highest incidence of skin cancer in the world. And it is while I was in 'the land Down Under' that I suffered the most severe sunburn of my life.

Sun exposure and its damage to skin is cumulative and I probably sealed my fate by the time I was 30. Skin cancer was once considered a disease of the elderly and Melanoma; the most sinister of them all, was rarely found in people under 60. I was about to become a statistic at age 52. 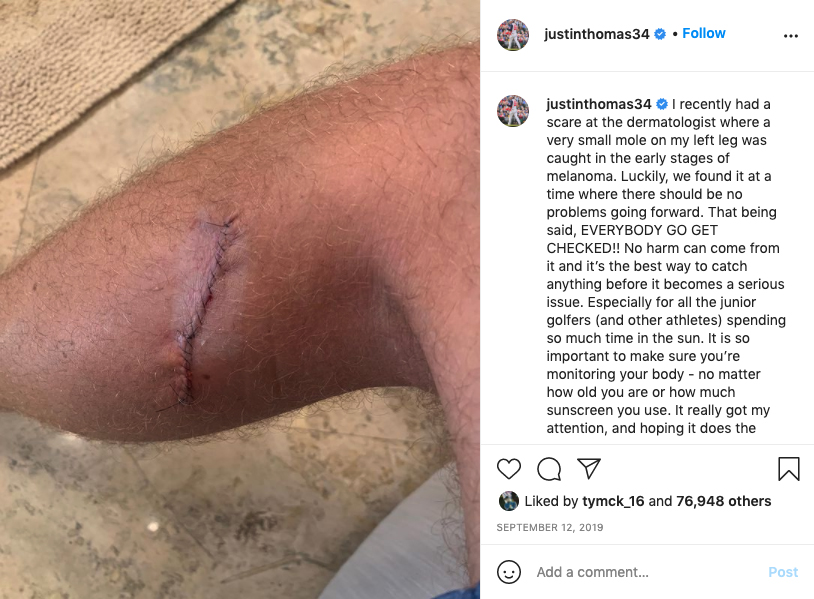 January 2020... the world was still spinning on its axis. Covid-19 was about to change our lives forever and cancer would soon change mine. I was drying my hair one morning when I noticed a small lump on the left side of my neck. I didn’t give it much thought at the time, but made a mental note to keep an eye on it.

By February, the lump had increased in size. I saw my family doctor and the tone of her voice as she palpated the mass was cause for concern.

Two ultrasounds and a biopsy were done to determine what this mystery mass was. The results came in on April 23rd, just 5 days before my son’s 19th Birthday. Cancer patients often describe feeling like all the air has been sucked out of their lungs when they first hear they have cancer. I felt like I had been kick-boxed in the gut.

My head, as they say, was spinning. 'How in the hell could this possibly be Melanoma? Where was the cancerous mole and why hadn’t I found it first?'

I had been hyper-vigilant about monitoring my skin. A plethora of atypical moles were removed by the time I was 35 but they were all benign. My official diagnosis is Malignant Melanoma of Unknown Primary (MUP for short) which essentially means that the origin of the cancer will never be determined. The next roundhouse punch was delivered when I was told that it was metastatic and considered stage 4, aka a death sentence. I was terrified by the notion that I could possibly die.

Perhaps it was time to get my affairs in order? Surgery was scheduled on May 5th, just 2 weeks after my diagnosis. Over 50 lymph nodes were removed during a 4-hour surgery. The 6-inch scar will be a permanent reminder of when cancer came for an uninvited visit. The pathology report indicated that only one node was positive for melanoma. I was restaged as having 3b, not ideal, but exceedingly better than the dreaded 4. A CAT scan, MRl and PET scan were done within a month of my operation. I was nuked, poked and prodded.

During my first visit with my Oncologist, she relayed a not-so-cheerful story that up to about 20 years ago, very few doctors wanted to specialize in melanoma because everyone died. Chemotherapy is for some unknown reason, ineffective on melanoma but thanks to the marvels of modern medicine, the gold standard is immunotherapy. It specifically targets one's own immune system and is akin to putting the pedal to the metal to seek out melanoma cells and subsequently put the brakes on it and prevent it from rearing its unwelcomed head.

Two treatment options were presented to me; adopt the wait-and-see approach with regular scans every six months, or begin adjuvant immunotherapy (which aims to eliminate residual microscopic melanoma cells via the immune system, to reduce the risk of future cancer recurrence, and to improve the overall chance of a cure.)

It was a no-brainer, immunotherapy, please. My first infusion of the wonder drug Opdivo was on July 1st of last year. Happy Canada Day, eh? The treatment protocol consists of an infusion every four weeks for 13 treatments in total. Immunotherapy caused my thyroid to crash, and I vacillated between hypo and hyperthyroidism. I'll be taking medication to regulate it for the rest of my life. I have chronic dry mouth which has slightly improved, so I’m cautiously optimistic that it will abate when I complete my infusions. I cannot go anywhere without a litre of water, sugarless gum or mints.

My mouth gets so dry at times that I feel as if it is lined with cotton. My speech can be impaired if I don’t keep my mouth hydrated. I’m sure that this is a welcome relief to anyone that has been subjected to my seemingly incessant chatter. The consequences of my surgery have been downright weird. My left ear is permanently numb and I have some paralysis on the left side of my mouth (I’m not drooling, so it’s all good.)

The most significant of them all was the limited range of movement and motion in my left shoulder. One of the nerves that controls said movement was cut to get at the lymph nodes. I was unable to swing a golf club last season and It took seven months of rehab to regain the mobility. The adage of not knowing what you have until it is gone is bang on. I’ve never been away from golf for that long.

My final immunotherapy is scheduled for June 23rd. The light is visible at the end of the proverbial tunnel.  Fear of a future metastasis will take up uninvited space in my psyche for years to come. However, the regime of skin checks and scans I will undergo over the course of the next few years should help to allay my angst. If something shows up, then there are combination immunotherapy drugs that are effective at knocking down the melanoma.

It has been almost a year since my life was turned inside out and upside down.

Cancer during a pandemic has been surreal to say the least. I’ve had to reconcile the notion that my former self is gone, and my future is uncertain. Simply put, we all come with a 'best before' date but none of us knows when that is. Perhaps it’s cliché, but life in fact, is not about who can amass the most money, attain the most material possessions or what golf club you’re a member of. Nothing is guaranteed in life. Adversity most certainly does not discriminate. Having this disease has expedited my need to evaluate what is truly important to me and it’s the simple things that take precedence now.

I languished for a while mired in trying to understand why this happened to me, well, why not me? Terrible things happen to people every single day. My life has been rife with ups and downs, highs and lows and everything in between. The one constant in my life has always been golf. It has been an incredible privilege and a wonderful gift.

I’ve travelled the world, met some amazing people who have become life-long friends and have played some spectacular courses. I harken back to the days when I was thrilled to just get the ball in the air. I eagerly hand-picked the range to make some pocket money to buy a plate of fries and an ice-cold Coke after slashing my way around Hirsch Creek Golf Course.

Life is a great mystery at times. There simply are no explanations for why some people seem to get through relatively unscathed while others are bombarded by challenges. I don’t like cancer euphemisms. This is not a journey for me. Journeys are meant to be fun, exciting and something you have control over. I don’t see myself as a fighter, or a survivor, for that matter. I’m just trying to do the best that I can in a club that no one wants to be a member of.

Now, if I could only get rid of the shanks…but that’s a whole other story.

Kim Cowburn is a native of Kitimat, BC and was crowned the BC Women's Amateur Champion twice, first in 1988 at Pitt Meadows GC and again in 1990 at Point Grey GC. She has represented her home province of British Columbia on no fewer than 14 occasions as a junior, amateur and senior. 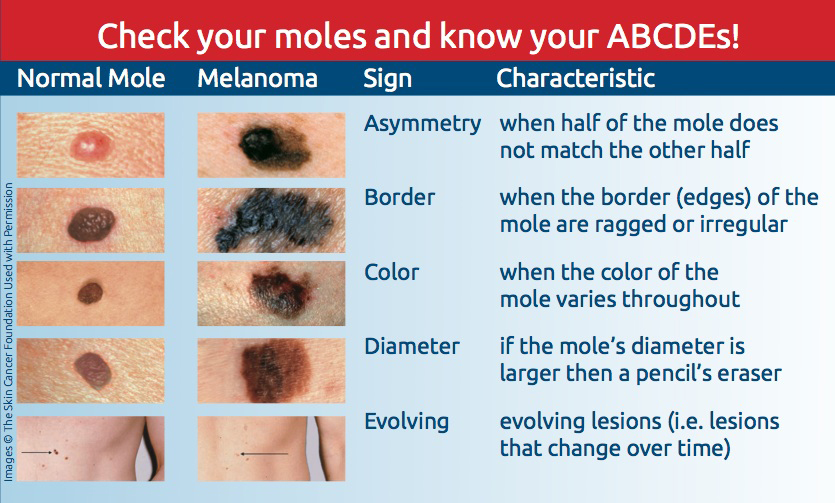 There are 4 types of melanoma: