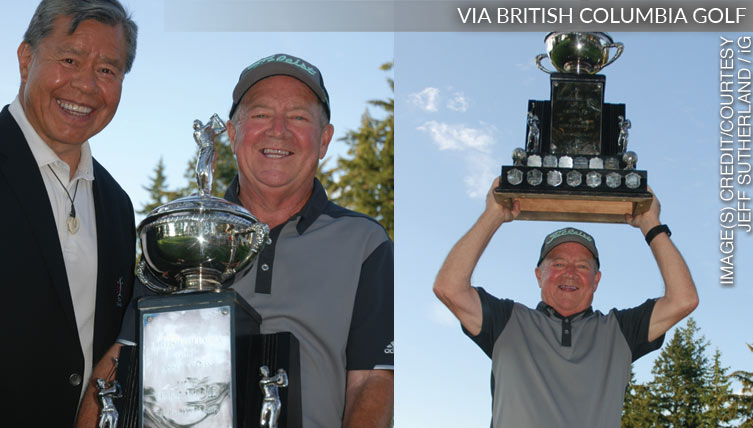 Past President Of BC Golf, Patrick Kelly (Left) Presents Sandy Harper With The BC Seniors' Trophy

VICTORIA - For the past two years, golf was a constant reminder to Sandy Harper that his life had changed and he was not the same person he once was.

Harper, one of this province’s most decorated amateur players, suffered a stroke in 2020 and the road back has not been easy. Especially when it comes to his golf, the game he has played so well that he earned himself a spot in the British Columbia Golf Hall of Fame.

“The funny thing about my stroke is the hardest thing has been the golf,” Harper said. 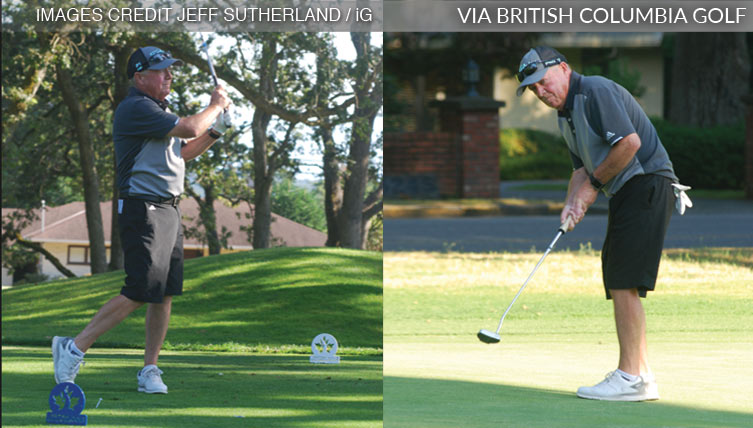 Above: Harper Has Rebounded From A Serious Health Setback

“I am still working, I can still do my real estate, but golf is such a precise game. That’s what has been so frustrating for me because I couldn’t hit certain shots with the ease that I could before. It affects your vision a little bit, your hand-eye coordination.

“If I didn’t play golf I don’t think I would have been as frustrated after having the stroke as I have been. Golf showed me that I am not the same person that I was in that regard. But the flip side is the support you get from the golfing fraternity. That has been amazing.”

That support was never more evident than when Harper recorded what he called the most emotional win of his life by capturing the B.C. Senior and Super-Senior Men’s Amateur Championships at Uplands Golf Club.

His fellow competitors had gathered around the 18th green to watch Harper put the finishing touches on his improbable win. He was greeted by one bear hug after another. One of the first came from Doug Roxburgh, the 13-time B.C. Amateur champion and five-time B.C. Senior champion. “This win means more to me than probably any other tournament that I’ve won, given what I have been through,” Harper said, fighting back tears. 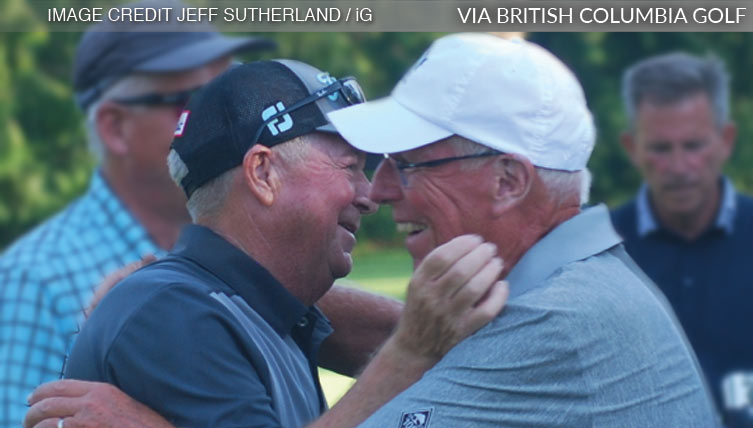 Above: Harper Being Congratulated By Long-Time Friend Doug Roxburgh

And Harper said Roxburgh, his good friend, helped inspire him with his own great play at the recent B.C. Amateur Championship at Christina Lake Golf Club. “Doug won’t like me to say this, but I think that finish that he had at the B.C. Amateur was the biggest accomplishment for a senior this year,” Harper said.

“I told him I think that is his best accomplishment in that tournament other than all the times he has won it. He’s 70 years old and he finishes six-under par in the tournament and 11th. It was amazing. That totally inspired me.”

Harper won by two shots with a 54-hole score of three-over par on an Uplands course that did not yield a single round under par. He began the final round trailing second-round leader Stewart Scott of Kelowna by one shot, but played a magnificent back nine to claim the championship he also won in 2012. That victory came at his home course, Nanaimo Golf Club, and was much easier as Harper lapped the field by 11 shots.

This one was tough and Harper had to fight off some familiar post-stroke demons that have been plaguing his golf game the past three years. Since suffering the stroke, Harper has battled anxiety, especially on the golf course, and has had occasional bouts of anger. He’s lost count of how many rounds he has not finished after hitting wayward shots.

Harper is especially proud of the way he handled some adversity in the final round. On the par 5 seventh hole, Harper was in perfect shape after two shots, about 40 yards short of the green in the middle of the fairway. It was the kind of shot that he used to be able to hit in his sleep. But he thinned the pitch badly and his ball flew the green, Instead of having a short birdie putt, Harper made a bogey.

Two holes later, on the par 3 ninth, Harper made a sloppy double-bogey that cost him the lead. “I never used to get angry on the course,” Harper said. “And I didn’t today, I handled all that stuff today very well. I was very proud of myself. I was more like I used to be. If that had happened last year, I might not have been able to finish.”

Birdies on the 10th, 12th and 15th holes, set up by brilliant iron shots, pretty much sealed the win for the 65-year-old Harper. He won both the B.C. Senior title for players aged 55 and over and also captured the Super-Senior crown for players aged 65 and over.

Harper credits the unwavering support he has received from his partner, Karen, and his two sons, Andrew and Alex, for helping him battle through some difficult challenges the last three years. He received a text from Alex before the final round that Harper said inspired him and helped put him at ease. “Alex sent me a text this morning saying, ‘go get them today, Dad.’ I said, ‘thanks, Alex, I will do my best.’ And he texted me back saying, ‘Dad, no matter what you do, I am so proud of you,’ which made me feel good, right.”

Harper closed with an even-par 70, matching the low score of the tournament. He drove the ball beautifully all week, seldom missing a fairway. “When I talk abut the stroke aspect of things, I have never really lost the ability to hit my driver because it’s teed up so you don’t need that same precision as when you are hitting an iron or three-wood off the ground. I think I might have only missed a couple of fairways the whole tournament.”

Even the guys he beat were delighted to see Harper win. Kelowna’s Norm Bradley, the 2020 B.C. Senior champion, tied for second with Scott at five-over par. “It could not be a sweeter victory for him,” Bradley said of Harper. “We were all really scared three years ago and worried about him and it is just fantastic to see him back playing. And he has had to work through it. 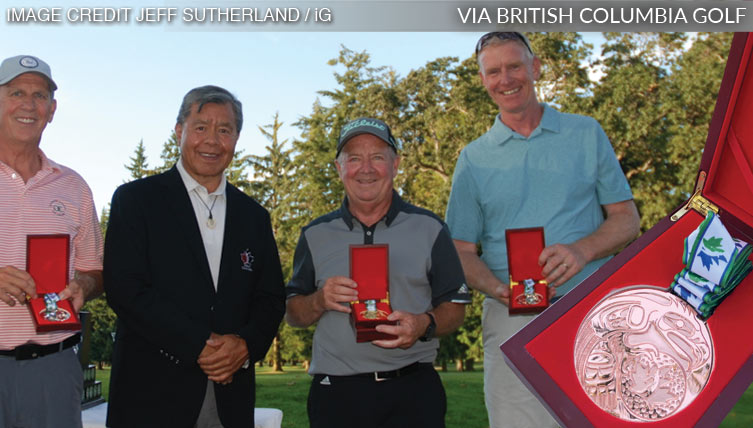 "He had to deal with a lot, he had the anxiety and had to battle through that. He kept playing and he kept getting his game in shape and then right here, on a big stage, he comes through and plays like a champ. It is very inspiring and I am so happy for him. If you are going to finish second, you want to finish second to him. It’s fabulous.”

Harper, Bradley and Scott will represent British Columbia at the Canadian Senior Men’s Championship, which goes Sept. 6-9 at Red Deer Golf & Country Club. Scott, a former British Army golf champ who immigrated to Canada 14 years ago, is hoping he can go. “My daughter is moving that weekend and my wife said to me, ‘I am sick of you going to play golf. You have to be here that week,’” Scott said, then adding with a smile, “so I am thinking now I might have an excuse to go.”

Pemberton’s Lance Lundy finished fourth at seven-over par and was second in the Super-Senior division. A two-man best-ball competition was also held. The Nanaimo duo of Sandy Harper and Al Jensen won with a score of 10-under par. That was two shots better than three other teams -- Greg Kosinski and Stewart Scott of Kelowna, John Ball of Deroche and partner Walter Kraakman of Whistler and the team of Lance Lundy of Pemberton and Norm Bradley of Kelowna.

A 36-hole Zone competition was won by the Zone 2 team of Scott Humphreys of Vernon, Norm Bradley of Kelowna and Jim Ryan of Blind Bay. They beat the Zone 5 (Capital Region) team by four shots. 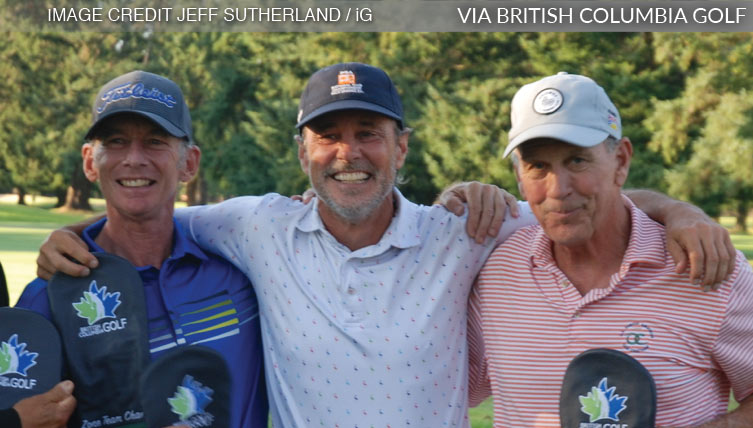