British Columbia’s annual golf expo is returning after a two-year Covid-induced hiatus with a new name and location. What is now called the Western Golf Expo is scheduled for Feb. 24 and 25 and is moving from its former home at the PNE Forum building in Vancouver to Abbotsford ’s Tradex facility.

The show is being held on a Friday and Saturday rather than the traditional Saturday and Sunday. “We are switching it up a bit,” says Joan Probert, regional director for the B.C. and Alberta chapters of the National Golf Course Owners Association of Canada, which owns and operates six golf expos across the country.

“It’s Friday night from 3 til 9 and Saturday from 10-4. We are trying to change the show a little bit to be a little less trade show like and a little more consumer celebration like. . .This is a consumer show so we want it to be really active and engaging for the consumers when they come. We want to create a show that is a little bit more experiential for the consumer.

“I feel very strongly that there is a huge consumer demand for getting out there and trying clubs and talking golf courses and seeing what the newest products are. We really wanted to capitalize on that and we thought adding in the Friday would make it feel a little bit more like an outing.”

The last Vancouver Golf Expo was held in February of 2020, just before everything was shut down due to the global pandemic. The show has been run virtually the past two years and the 2023 show will also have a virtual component. Probert said the move to Abbotsford will allow the show to try some new things.

“It is actually 20,000 square feet bigger,” she said. “It is massive. It is a little bit farther out (than the former PNE location) but the good news is parking is affordable, the food and beverage is affordable and the entry fee will be the same. We have a much bigger space to play with.

“We're working on amping up the driving range experience a little bit and we are going to try and expand on the retail and really encourage a lot more selling to happen at the show.” Probert said she also hopes to introduce some live auctions during the show, allowing visitors to bid on various items like green fees.

“We are also going to do something totally new this year which I think is going to be super cool,” she said. “We're doing an education area. Have you ever been interested in a career in golf? You can come and learn about the different careers in golf and then we are going to host a job fair. So the golf courses can interview and hire people who come to the show.”

THAT’S A WRAP: Abbotsford’s Adam Hadwin wrapped up his fall season on the PGA TOUR with a tie for seventh at the Houston Open. Hadwin closed with a two-under 68 to finish at seven-under par. That was nine shots behind winner Tony Finau, who beat the field by four shots. It was Hadwin’s second top-10 finish in five events this fall. He earned $273,000 and moved up 22 spots to sit 38th in the FedEx Cup points race.

Surrey’s Adam Svensson tied for 39th at even-par and made $38,540. Svensson now stands 92nd on the points list. Abbotsford’s Nick Taylor missed the cut and dropped to 44th on the points list. This week’s RSM Classic in Sea Island, Ga., concludes the fall season on the PGA TOUR. Svensson is the lone British Columbian in the field.

CONDITIONAL STATUS: Langley’s Khan Lee has earned conditional status on the 2023 PGA Tour Lationoamerica circuit. Lee, who played his collegiate golf at Washington State University, tied for 20th at a PGA Tour LA qualifying school in Ocala, Fla. The top 12 players earned guaranteed starts, while those finishing 13th through 40th received conditional status. Kaleb Gorbahn of Smithers and Ziggy Nathu of Richmond are both in the field for this week’s PGA Tour LA Q-school in Mazatlan, Mexico.

TENNESSEE TIME: Surrey’s Angela Arora, a former B.C. Junior and Juvenile Girls champion, is heading to the University of Tennessee to begin her collegiate golf career in January. Arora, who has been a member of Canada’s national junior team the past three years, visited the Tennessee campus in Knoxville earlier this fall. “I just fell in love with the facilities and campus,” she said. “Both of the coaches are really amazing and it’s a great program. I just feel like it’s a good fit.” 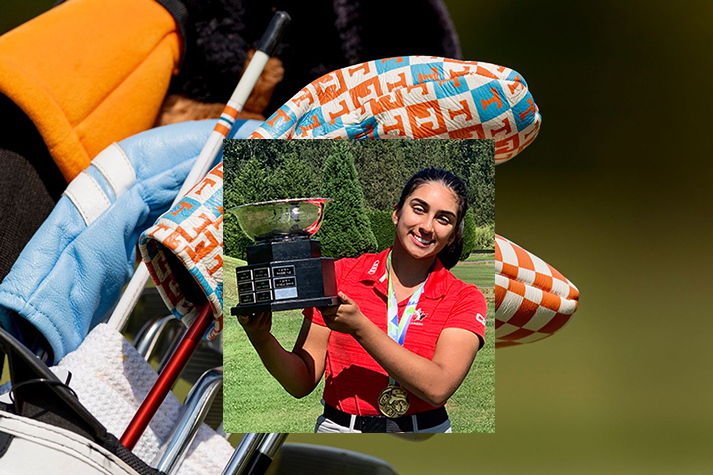 BC's Angela Arora Is Heading For The Tennessee Lady Vols

Arora, who plans to major in business management, got to attend a Tennessee football game during her visit. “I saw them play Florida and it was a crazy atmosphere,” she said. “I don’t know much about football, but I feel like I am about to become a really big fan.” Another top B.C. junior, Victoria’s Rebecca Kim, has signed a letter of intent with Oregon State University and will join the Beavers next fall.

B.C. RECRUITS: Simon Fraser University coach Matthew Steinbach has added three B.C. junior players who will join the Red Leafs in the fall of 2023. Brendan O’Brien of Victoria, Justin Bjornson of Surrey and women’s recruit Dana Smith of Campbell River all signed letters of intent. Bjornson will join his older brother Bailey on SFU’s men’s team. “We’re delighted to welcome three amazing student athletes to our program for fall 2023,” Steinbach said. “Dana, Brendan and Justin represent our program values and we know that they will be important players for the continued growth of SFU golf.”

FOUR-BALL FUN: Vancouver juniors Michelle Liu and Anna Huang have earned spots in next spring’s U.S. Women’s Amateur Four-Ball Championship. Liu, who played with Angela Liu of Irvine, Calif., and Huang, who partnered with Leigh Chien of Irvine, shot nine-under 63s to share top spot with one other team at Vista Valley Country Club in Vista, Calif. Five sides advanced to the 8th U.S. Women’s Amateur Four-Ball Championship, which goes May 13-17 at The Home Course in Dupont, Wash.

JUNIOR ACHIEVEMENT: Nanaimo’s Matthew Wilson finished sixth in the 14-15 age division of the Notah Begay III Boys Junior Golf National Championship played at Koasati Pines at Coushatta in Louisiana. Wilson closed with a two-under 69 to finish the 54-hole event at one-under par. That was nine shots behind winner Mykhailo Golod, a 15-year-old who fled war-torn Ukraine and now lives in Davenport, Fla.

FALL FINISH: The University of B.C.’s men’s team wrapped up its fall season with a win at the Firestorm Invitational in Buckeye, Ariz. UBC won the 54-hole event by seven shots with a team total of eight-over par. John Paul Kahlert led the way for UBC, finishing fourth overall with a total of three-under par. Teammate Hudson Lafayette was sixth at one-over. The win was the third in five events for the UBC men this fall. The Thunderbirds return to action Feb. 11-14 in Fullerton, Calif.