The WM Phoenix Open - 'The Greatest Show On Grass' 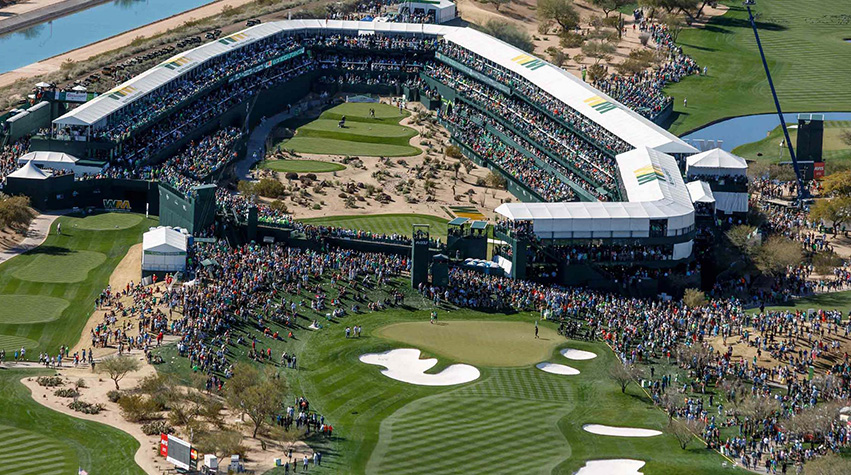 by Bryan Outram, Inside Golf

If attending a major sporting event is in your travel vacation plans anytime in the near future you couldn't do better than making that event the PGA TOUR’s 'Party in the Desert' - the Waste Management Phoenix Open.

The PGA TOUR has worked hard in its efforts over the last few years to maintain purse levels and the Waste Management group came through in 2010 to help make the long-historied Phoenix Open truly an oasis in a desert of fast drying up sponsorships.

Taking place as a rule on the first weekend in February there are often Super Bowl festivities surrounding the tournament making it an even crazier shindig, especially if the big game happens to be held in Phoenix as it was in 2009 and is again this coming February 4th, 2015.

Annually it's the best attended golf tournament on the planet, last year more than 563,000 people passed through the turnstiles breaking the previous week-long tournament record of 538,000 set in 2008.

Due to the unique course layout and the more than ample available parking nearby the WM Open never sells out, so anyone who wants to go can attend. And obviously many do, making it unequalled on the PGA TOUR for a party atmosphere.

Why so popular? Well, when you combine the consistently warm, sunny desert climate with its location in beautiful Scottsdale, Arizona it's not hard to see why both locals and travelers alike flock to this event every year. Click HERE to see the Waste Management Open official website.

The most unique element of The WM Phoenix Open has to be the 'stadium seating' erected on the par-3 16th hole.

As many as 20,000 spectators - and there's no mandate here to refer to this raucous bunch as 'patrons' (see: Masters Tournament announcer no-no’s; or, the Jack Whitaker rule) - turn the 16th hole into a huge party, jeering tee shots that don't hit the green and wildly cheering the ones that do - usually.

Yes, there is some bias exhibited toward certain players, all in good fun of course. Make no mistake about it, though, far and away the biggest local favourite is Arizona State alum Phil Mickelson. The din begins to grow as word quickly spreads that 'Lefty' is entering the Stadium through the tunnel that leads from the island green par-5 15th.

It grows to a crescendo as he prepares to hit his tee shot, then halts, however briefly, to allow him to swing the club in an almost eerie silence and then erupts again as the ball takes flight. Almost any result from Phil's shot is likely to receive acceptance, although even he isn't spared a little razzing if he misses the green on this shortish 160-yard par 3 hole.

Of course more often than not Mickelson hits a good shot and the noise is deafening even to those halfway across the golf course.

The rowdiness that surrounds the 16th on the TPC Stadium Course for the WM Open is not exactly standard fare compared to the generally staid atmosphere that accompanies most PGA TOUR events.

And it wasn't long ago this writer counted himself among those 'traditionalists' who found the boisterous, college-party ‘shenanigans’ surrounding the 16th to be somewhat out of place in golf. 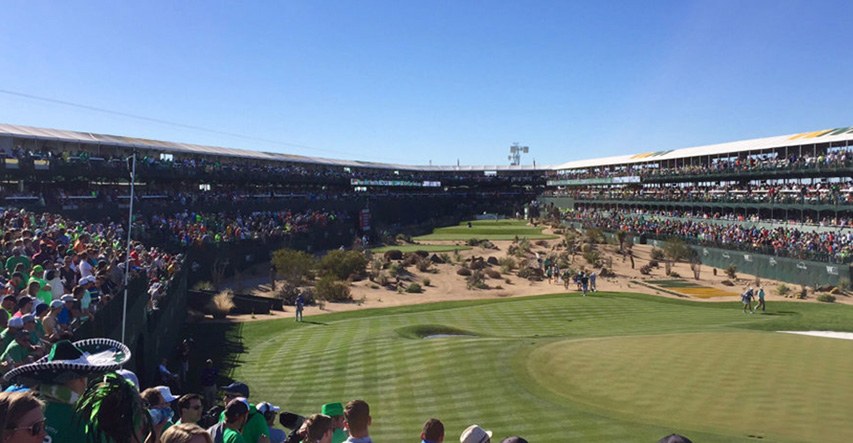 Cheers... In More Ways Than One, On The Exciting 16th Hole At TPC Scottsdale

That is until actually witnessing in person the interaction between the players and the high-energy - or just plain high - fans, radically changed my opinion on this 'new tradition'.

Almost to a man the players embrace the enthusiasm of the crowd and often exhort them to even more rambunctious behaviour - depending, of course, on the quality of their tee shot. And any player who obliges the pleading onlookers by tossing them a ball at the conclusion of the hole is instantly granted favoured status. In more recent years the extermely unusual but also highly entertaining exhibition of 'caddy racing' has also appeared.

Unfortunately the powers that be in the PGA TOUR decided to ban the 'competition' for fear that injuries may result. Maybe so, but it sure added one more entertaining element to the atmosphere that surrounds the 16th. To see for yourself check out this YouTube video of the Best caddy race yet - on the 16th hole @ Waste Management Phoenix Open

Another thing that makes this tournament so intriguing is that the TPC Scottsdale is a public course and thus anyone can play it. Recreational golfers always enjoy the opportunity to play on the same courses as the pros and this is one of the best opportunities out there. Click HERE for course map.

Set in the Sonoran Desert and surrounded by the majestic McDowell Mountains, the TPC Scottsdale (www.tpc.com), a PGA TOUR Facility which opened in 1986, was designed by the team of Tom Weiskopf and Jay Morrish.

There are two courses for you to enjoy, the better known Stadium Course as well as the Champions (formerly Desert) Course.

All 36-holes offer a blend of challenge and playability for the enjoyment of all levels of golfers, professional and amateur alike.

At the Stadium Course, which is known for its mounding, trouble comes in the form of the rough, 74 bunkers and large, tricky greens.

The Stadium Course, which closed April 1,2014, reopened to public play November 14th – just in time for the winter season – after an eight-month, $12 million facelift that included renovating both the course and the clubhouse.

"The time had come to update the Stadium Course at TPC Scottsdale to provide a more modern and state-of-art tournament course for today's tour players," said Tom Weiskopf, who co-designed the course back in the 1990s and led the renovation project. "These changes will also position the club to continue as the leader in the competitive Scottsdale resort and daily fee market." 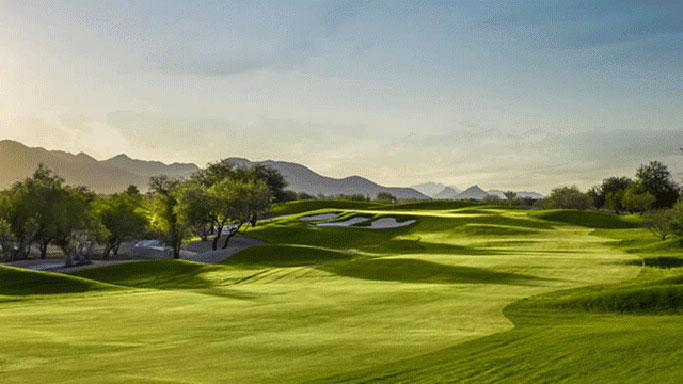 During the makeover, Weiskopf resurfaced all the greens, and relocated the greens on No. 2, 3, 4 and 14. He also reshaped the bunkers – replacing the brown sand with white – and tee complexes, added a new irrigation system and cart paths, and enhanced the course's desert landscaping by planting more than 250 trees. The clubhouse renovation, under the direction of architect firm Allen & Philp, includes additional locker room and meeting space, and interior upgrades to the entire facility.

Also well worth a visit during the WM Open is the TPC's Champions Course, which rivals its more famous sister course in both beauty and playability. This marvellously re-designed (in 2007 by Randy Heckenkemper) layout offers the consummate desert golf experience.

Featuring 7,115 yards of undulating Bermuda fairways, pristine greens and challenging bunkers, the par-71 course meanders over natural ravines and picturesque foothills, with five par-3’s and a diverse variety of par-4’s and par-5’s.

The four dramatic finishing holes make this gem a “must play” at prices commensurate with municipal golf facilities, including being able to walk the course.

When the urge strikes to tee it up after watching the pros knock it around in the morning, the Champions Course is a short walk from the gallery at the Stadium Course. Tee times at both courses can be made up to 90 days in advance.

At the end of your tournament day, if you still crave excitement, be sure to check out the action at the 'Bird's Nest' where the live entertainment will keep you enthralled. And that includes the bands as well.

Where Else To Play

Especially during WM Phoenix Open week, the Grayhawk Golf Club is hard to beat. With 36-holes of the best desert golf around and a laid-back, ‘party-time’ approach, there's a good chance you'll have fun and maybe even run into a Tour player. 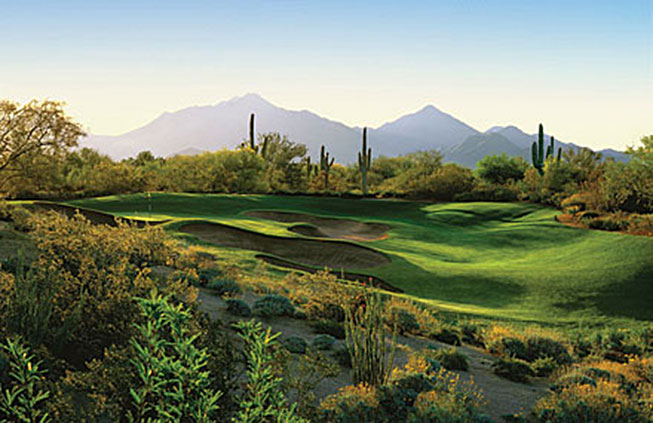 A group of Australian pros regularly practice at Grayhawk, and a number of the Tour players in the WM Open field will take refuge there to avoid the crowds.

Both the Talon and Raptor courses are ranked in the middle of the "Top 100 Courses You Can Play" list by Golf Magazine.

The scenery provided by the surrounding McDowell Mountains and the Phoenix Valley are also very impressive.

The Raptor Course, designed by Tom Fazio, is the tougher of the two courses and hosted the Anderson Consulting World Championships of Golf four times during the mid to late '90's as well as the Fry's.com Open from 2007-09.

The Raptor Course has been good to a pair of PGA TOUR lefties as Phil Mickelson was anointed the unofficial ambassador of the course soon after it opened in 1994 and still holds the course record of 61. Canada's Mike Weir won the 2007 Fry's.com Open here for his 8th career PGA TOUR win.

Tom Weiskopf really brought desert golf into the forefront with his 1989 coming-out design at Troon North's Monument Course. He followed that effort with the Pinnacle Course six years later. 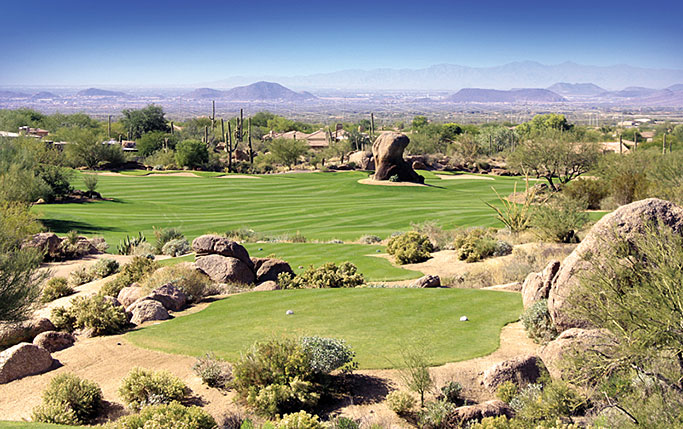 Both designs take advantage of arroyos, natural washes, huge saguaros, mesquite and ironwood, all of which contrast with the lush green fairways.

Troon North's unusual signature hole, of which there could be many, comes complete with a boulder in the middle of the fairway on The Monument hole.

Work crews tried to move it originally, but the City of Scottsdale fought for it to be left alone. Weiskopf, proving he had a sense of humour, left this boulder in the middle of the fairway some 262 yards from the back tee box.

One of the newer desert delights comes from We-Ko-Pa Golf Club, which means Four Peaks Mountain in the tribal language spoken by the Yavapai Native Americans. Set amid a rocky desert landscape, We-Ko-Pa is on the Fort McDowell reservation. 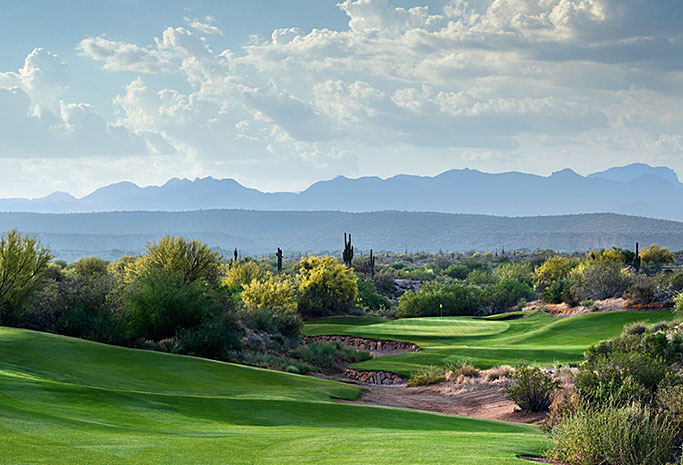 The Jack Nicklaus protégé created a more playable course that blends with the natural landscape - arroyos and box canyons.

He framed the holes with sculpted bunkers and waste areas. And if you score low, think about trying your luck at the Fort McDowell Casino - a famous fixture on the reservation.

The Westin Kierland is well worth a visit as well. The 27-hole course is the backdrop for a luxurious 2,200 room hotel. The three 9-hole layouts - Mesquite, Acacia and Ironwood - are named for the trees that decorate Kierland Golf Course.

The golf is more than fair - generous fairways, super large greens and a parkland like setting in the middle of the desert. The fairways are like long canyons or valleys.

The greens have lots of dips and undulations. But the real challenge is avoiding the over 300 bunkers that dot the landscape and await errant shots.

Depending on your budget, of course, the best place to locate yourself and attend the Waste Management Phoenix Open is at the Fairmont Scottsdale (www.fairmont.com/scottsdale) from which you can walk straight out onto the TPC Stadium Course. Just follow the roars to find the 16th hole. 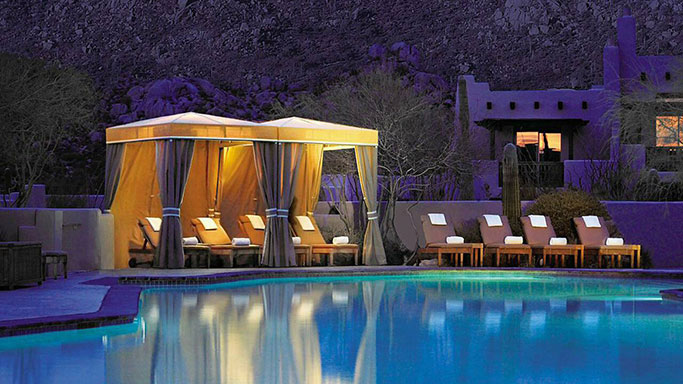 After a long day of spectating it's never a bad idea to pay a visit to the world famous Willow Stream Spa located in the Fairmont Scottsdale.

The Willow Stream is rated in the top 10 spas in North America by Conde Nast Traveler magazine.

Staying with the idea of top notch accommodations the Four Seasons Resort Scottsdale at Troon North embodies all of the first class qualities one has come to expect from a Four Seasons facility.

Recently renovated they offer stunning Southwestern-style casitas and are second to none in the way of friendly, efficient service.