Quaaout Resort And Talking Rock Golf Worth Talking About 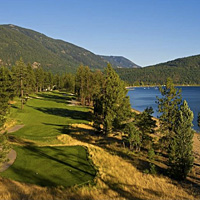 Courtesy of Inside Golf

Back in 1929 some dude named Fats Waller coined the phrase, “That’s what I’m talking about,” in a song titled The Joint is Jumping.

Little did he know then that catch phrase would be widely used almost 100 years later, and in this case, to emphasize the delights of Talking Rock Golf and the Quaaout Resort, near Sorrento, B.C.

The thing is, anyone that isn’t jumping on this bandwagon and heading to one of the great golf courses and resort areas in this part of the country is missing the beat, so to speak.

Nestled on the tip of Little Shuswap Lake, and overseen by the local First Nations people of the Shuswap Band, this getaway is a get-right-back-there kind of place given the peace, the scenery, the food, the accommodation and of course, the great golf layout that’s offered up.

Certainly, you don’t have to stay here to golf here, but why wouldn’t you?

The Quaaout Lodge is a clean, friendly spot to bunk down for a night or two and take in what the area has to offer. The resort is located on a delta between the Big Shuswap and Little Shuswap Lakes and the name Quaaout means, “Where the sun’s first rays meet the water.”

The Talking Rock part of the equation was designated to pay homage to the pictographs painted by the band’s ancestors’ visions from dreams and things they saw on their journeys.

Many of the pictographs were painted in red, symbolizing life, virtue and all good things. The drawings now found in the lodge and on the golf course are reproductions of actual works found in the area.

These forms of communication were key in the area in the early days, since there were no written versions of historic events by the Shuswap, or Secwepemc Nation, of which there are 17 bands.

As such, the news was passed on orally and pictured on rock to record such things as family events, rites of passage, vision quests and hunting grounds.

Including all that heritage into this venture was vital to the resident band members according to Stephan Wittmer, the general manager at Quaaout Lodge.

“It is a big desire of the band to incorporate as much First Nations’ history (as possible) into the golf course and the lodge,” he explained. “The chief, with the architect, had a lot to do with the original design of the lodge.

“I think it is maybe one of the most difficult things to share the culture with our guests. To share the art is one thing but when it comes to ceremonies we are still kind of struggling with that.”

One of those areas, Wittmer pointed out, is the on-site sweat lodge which he stated, “can not be a business. They could not do this and charge money. One of our elders, Ernie Phillips conducts the ceremony, and if we do have guests who are interested we phone him up and ask him to come out. It is an on-going thing to incorporate as much culture as possible.”

Built in the fashion of the Shuswap Nation’s winter homes, or kekuli, the lodge itself is a well-designed building offering up unique experiences vacationers are looking for.

Everything is within easy accessibility and from the dining room and lobby area great views of the lake and mountains are offered up.

The thing is, those views don’t stop there as they’re carried on into each and every room in the four-storey building.

The lodge was redesigned two years ago and as mentioned, features a dining area with outstanding views of the lake and mountains.

The rooms are clean and comfortable complete with 37” plasma screen TV’s and a swimming pool, whirlpool and steam room and an eye-catching 3D sculpture on the lower level.

As well, the main area plays home to the golf course’s pro shop and there are Internet-ready computers for the use of guests.

“The outside of the lodge looked dated; it had a metal roof and we had some leakage problems on the top floor,” Wittmer noted of an extensive makeover done last year.

“The beams were added on and every room has a balcony with a view of the lake now which they didn’t before. It (the makeover) was overdue. One of the things was the golf course opened in 2007 and it’s an incredible golf course and we got incredible feedback on that but the room part was lacking.

“The band spent $2 ½ million on the renovations,” Wittmer said of the band deciding they needed to bring the guest residence up to speed with the outstanding golf layout.

“They band members are very proud of what they have here. The reason for the lodge and the golf course being here is thanks to a progressive chief and council. It is still a mandate of the lodge and the businesses they own to hire, and train, as many Native people as possible.”

Outside the main building the Native tradition continues with interpretive areas featuring teepees, kekuli and the aforementioned traditional sweat lodge enabling guests and visitors to view, and experience, firsthand the ways of the original settlers in this area of B.C.

Another amenity is the huge stretch of sandy beach that resort guests have access to in order to enjoy their stay to the fullest.

As for the food at Jack Sam’s Restaurant located in the lodge, again this is something you have to experience to believe. The menu in the dining room is well rounded and has something to fit everyone’s appetite including an absolutely magnificent brunch each Sunday that again, is worth the price of admission.

Right from the opening drive on this beautiful course you’re treated to awe-inspiring views, thanks to both the course design and the surrounding mountains and the lake.

Mitch Buffalo, the CPGA assistant pro at Talking Rock said the course is a source of great pride to the local band members. The thing is, he noted, it took a while to bring this great track up to speed.

“My understanding is that the course was on hold for about 10 years,” he began, in explaining some early developmental problems that were rectified by a monetary input from 25 band members.

“The course was designed originally by Les Furber and then Cooke-Carleton came in and did the rest. There was a little break, so to speak, because of the financial situation.”

The course was rescued by the locals as they realized what a great product they had in front of them and made arrangements to finish it off and open it up to the public. That foresight is being rewarded today.

Now in its fourth year of operation the course is beginning to mature, Buffalo said, and more and more golfers are beginning to appreciate what’s offered here.

Yet, prior to the high tourist season in July and August, the layout can be somewhat quiet, especially during the week. There are plans underway to change traffic flow however, including a golf academy and attractive Stay-and-Play packages.

“We’re still not real well known from my understanding. I don’t know if it’s demographics but we are pushing for more players with specials to fill it up,” Buffalo noted.

The thing is, once word gets out about Talking Rock you may be hard pressed to latch onto a tee time.

The course, as alluded to already, is real eye candy and plays well, stretching out to 7,129 yards off the championship tees down to 5,437 from the front markers.

“We take great pride in our course. It is fair but we have fairway bunkers that toughen things up a bit,” Buffalo began in explaining his track’s characteristics.

“You’ll find our fairways are a bit wider than most places. The greens are medium sized and roll somewhere around nine (on the stimp).

“What you’ll also find on our golf course when you’re out there, except on (holes) eight, nine and 10, is you basically have the hole to yourself on each shot throughout the golf course.”

Buffalo also noted the views on the course are tremendous, particularly on the back nine as you head toward the clubhouse. Asked what would be the signature hole, Buffalo quipped, “I like to say we have 18 of those!”

However when pinned down, he noted one truly outstanding hole here is No. 15, a downhill par 3 measuring 210 yards off the back tees; 192 off the blue; 171 off the white and 152 from the front blocks.

The thing is, it’s difficult to concentrate on the task at hand as you gaze out over the lake in the near distance and the mountains surrounding you.

“Club selection is so important there, especially if the wind is up,” he said of trying to land your tee shot on a green that runs length-wise from the tee box rather than across.

It is guarded by deep bunkers as well as a steep slope and fescue grasses to the sides, so walking away from this test with a “3” on your card is a sign of a job well done.

Another aspect of Talking Rock Golf is their teaching program, something the pros are looking to build up in popularity, Buffalo explained.

“We have the golf academy here that we’re hoping to get going at full bore here this year. It has a double-ended driving range that’s all grass. It’s a great facility.

“Being a resort course we are finding it tough to draw in the students but using the Internet we’re getting more interest in it. There are different packages available,” including a one day ladies school, kids’ summer camps and two, three or five-day schools as well. “Just go online and all the packages will be right there.”

Asked how to best chase down a great score at Talking Rock, Buffalo said you can be aggressive at times but caution does come into play as well as you make your way around this gorgeous piece of property.

“You’ve got to be careful of the fairway bunkers,” he advised. “There are a few of those that come into play that you don’t see and if you want to cut a corner, say on No. 5, the fairway bunker on the right comes out further than you think.

“But,” he said in conclusion, “what you see is what you get out here,” and what you see will leave you echoing some old musician’s feelings when you chortle, “Talking Rock and Quaalot Lodge - now that’s what I’m talking about!”