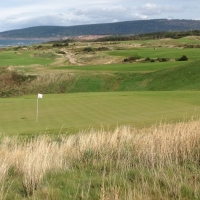 There isn't much, if anything, you can write about Cabot Links and its character that hasn't already been written several times over. So let me say this: I'm not going to try.

What I am going to do however is say this: The Nova Scotia course that was designed by Albertan Rod Whitman, and set in action a year and a half ago, is everything you've heard and more.

Suffice it to say that Cabot, sitting on the shore of the Gulf of St. Lawrence on Cape Breton Island is a good test of links style golf. It's firm, wind-swept and presents obstacles that you don't see until it's too late.

The course plays to a par of 37 on the front nine with only one par 3 hole but gives players a breather of sorts on the inward nine as it's shorter than the front by almost 700 yards from the second tee box from the back (or the blues on most tracks) and 600 yards off the middle deck.

It also gives you a trio of par 3 holes on the way home, not that it makes the course any less challenging or impressive. In fact, off the middle box one of those short holes is only 92 yards but given the wind that buffets the green more often than not, those are 92 hard-earned yards.

This story though is about something else. It's about how a piece of land goes beyond it's sole purpose as a golf course and becomes the salvation for an area. It is about becoming a drawing card that has brought life back to an eastern Canadian area that was decimated by an economic downturn that began years ago.

Speak to just about anyone from Inverness, the home of Cabot Links and the soon to be home of Cabot Cliffs, and they'll tell you without hesitation that the first of the two courses has breathed life back into this part of Cape Breton.

My caddie for my round was Wesley Beaton, a father of two who is a lifetime resident of the area and who loves to see one and all come in to enjoy this unique track. What he has also enjoyed is once again being able to fill up his old-timers' hockey league with peers who had left to earn livings elsewhere but who have now returned home.

The biggest thrill, to him and others is the fact the course has gainfully employed over 100 people in the area and is now drawing young people back to the island, home for good from places like Alberta and Saskatchewan where they'd gone to find gainful employment.

That sentiment is echoed by two figures at the helm of Cabot Links, Joe Robinson and head professional Ryan Hawley. Again, both simply note the number of people the course has employed and what's to come when Cabot Cliffs opens in 2015.

"Certainly it's bringing a lot of people back to Inverness and back to Cape Breton," began Hawley, another native of this area of the country.

"Myself for example; I spent the last 10 years on Prince Edward Island and my plans as a head professional did not include coming back here to work. But to be two hours from where I grew up ... it's just absolute heaven here."

Hawley said not many people bought into this idea when Ben Cowan-Dewar first floated the plan of building a world-class golf facility on the site of an abandoned coal mine, which interestingly enough used to be the economic driver in the area as is the golf course that now sits in the same spot.

"People that were involved with the course knew what it was going to be. I think a lot of the locals were a little doubtful at first. That it was actually going to be able to succeed. We're just not used to seeing the travelers that are coming through here (now). Talking with a lot of the locals in my year and a half of being here, that tune has changed quite a bit without a doubt."

Agreeing with that, and further talking about what the course has meant to the area was Robinson, who noted it has provided jobs for over 100 local residents ranging from course staff to hotel and restaurant help.

"When the coal mine closed down here in the '50s, that was pretty much it as far as employment went in the area. A lot of the younger people had to leave here to find work. The golf course here was the best thing, basically, that had happened since the '50s. Kids are coming back here now, especially students who never had the chance to work here before."

At present the playing season at Cabot Links is being tested for longevity, but Robinson said he hopes eventually it will stretch for at least seven or eight months, from May until November.

"We started this year on the sixth of May and we'll go until the third of November. Last year we stayed open until mid-November but it really didn't pan out although we had some good days for golf," he noted, saying the course ended up putting through about 10,000 rounds. "Hopefully, down the road we'll expand the season."

While that number sounds low, Robinson said it is in fact a realistic figure given a few things.

"It is a relatively new course and it's not the easiest place to get to," he pointed out "We don't charge a lot of money for green fees but we are the highest in the area so we don't get a lot of local traffic."

"Keep in mind this is our first full season," noted Hawley about rounds played at Cabot Links. "I know we did reach our goal of what we wanted last year and this year, I think it's exceeding all expectations as well."

Besides the new business of golf in Inverness, other employers have been spawned from the opening of Cabot Links including eating spots, a kayaking business, whale watching tours and deep sea fishing, all of which bolster an economy that not all that long ago was severely depressed.

And in the end, that's what a new start-up business is all about: Getting people to try your product and having them then plan a return visit which helps everyone in the community.

"It's been phenomenal," said Hawley in closing. "This season has been very busy and once the second course is in, we'll get a lot of return customers. Well, we're already getting a lot of return customers but we'll see a lot more people start to come through and with two courses, it becomes more of a destination," and in this case, a destination well worth the time and effort it takes to get to Cabot Links and soon, Cabot Cliffs.

By the way, this isn't a resort-style golf course. While the rooms at the hotel are nice and the restaurant food good, the course is plain ... just the way Whitman wanted it when it was designed.

The pro shop is small and has no hard goods for sale. It does have shirts, hats, balls and a few mementoes like ball markers and flags but no clubs.

There are also no fancy tee box markers showing you how the hole lays. There are no 150 yard posts sticking out of the ground

But the trade-off is worth it. What you get here is a wonderful place to test your game in the harsh reality of links-style golf - in the wind and the wide open spaces of Cape Breton Island.