From The Fringe: New Meaning For The Term Water Hazard 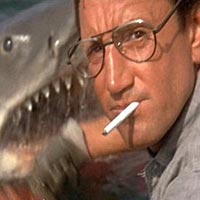 iG has previously profiled a course in the Amazon where piranhas have been known to eat fingers. (click HERE for more on that). Now we head down under to a course where the "Jaws" are a little bigger... Queue the ominous music.

When the iG editors saw a report on the blog site www.aussiegolfer.net about sharks at a Queensland, Australia golf course, we just had to check it out.

At the Carbrook Golf Club near Brisbane, there had been rumours of sharks in the ponds and lakes on the back nine of the course since the 1990s.

At that time, flooding of the nearby Logan River had resulted in water covering the course for an extended period of time.

As the water level dropped, large numbers of fish were trapped in the area's many creeks and lakes.

Rumours began to circulate of a shark being seen in the lake and while it may have only been rarely sighted, it was often talked about.

Then in more recent years, the sightings became a regular occurance, often with more than one being seen at a time.

Eventually, photographic evidence was gathered and the club has taken on the sharks almost as mascots.

Their website even has a page on the subject that has videos of the cartilaged critters. Also included are some still pictures that clearly show multiple sharks cruising around pipes that drain the fifteenth fairway (see above).

The club newsletter uses the shark motif and the sharks of Carbrook even have a club tournament named after them.

Once a month, The "Sharklake Challenge" is held.

An open competition held on the last Wednesday of each month, the course is set up to its full length and the pin positions are set to hard.

Call it a aussie version of an "ironman" event.

Players who play better than their handicap receive a Sharklake Challenge Polo Shirt.

Are these sharks dangerous? According to wikipedia they are.

Well known for its unpredictable, often aggressive behavior, they may be more dangerous to humans than any other species of shark although there have been few recorded attacks.

Evidently the bull shark is common worldwide in warm, shallow waters along coasts and in rivers and can survive in fresh water.

See below a video posted to youtube of the sharks by "BalthazarSan". One of the comments posted on his channel is quite an eye-opener.

BOBtheOTAKU writes, "I live just down the road from here. Have you seen the guy that dives there collecting the golf balls. He's one brave and crazy mf."

Either that or he's the Great White version of Crocodile Dundee.