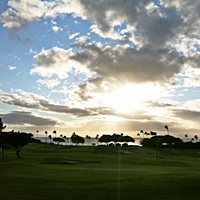 Inside Golf's Travelling golf writer/reporter Gord Montgomery made the sacrificial journey from his home base in Spruce Grove, Alberta to the paradise that is Maui and managed to play some very nice golf courses. And obviously whenever one has that opportunity it's imperitive that a 'best of' list gets compiled. Sooo.....here it is. We started with the first nine of Gord's Best 18 holes in the County of Maui in a previous article. Now we present the back nine.

The hole sets up as a dogleg right but cutting the corner isn’t easy as trees and a massive bunker protect that side of the fairway.

To the left there’s lots of room but if you overshoot the fairway, an approach shot out of the tough rough doesn’t guarantee you of getting to the putting surface.

Speaking of the green, it has a false front on it, so anything hit to the front edge is in danger of coming back to where it started.

No. 11 - At this point, we figured it was only fair to give you a bit of a breather with a short hole – yeah, right!

This one is a par 3 but one that plays to 233-yards and a miss here is not good.

The hole, situated at the Waiehu Muni track in Wailuku, requires an accurate tee shot to an elevated green off an elevated tee box.

Missing the green isn’t the end of the world but it certainly makes a par hard to come by.

No. 12 - This is one of those holes everyone should experience – even once.

Our 12th is the opening hole at the Plantation, the one you see on TV with the big gaping pit on the right side of the fairway that swallows golf balls.

This is a par 4 of huge proportions for the pros (520-yards) but being a mere mortal we played it at 434-yards, which is still lots of real estate to cover. It is downhill but even so, it’s still big.

A good drive to the left side will catch the down slope and rocket your ball another 40 to 60 yards along its way, making for a mid- to high-iron approach shot into a large green.

This is a great hole to start a round – unless of course you take a snowman on your scorecard which makes you want to turn around and play it again because it’s one of those holes you look at and think, “Hey, it’s not that hard!”

No. 13 - The second par 3 on the back nine is another dandy and is located at The Challenge at Manele on Lana’i.

Playing to ‘only’ 154 yards off the Blue tees or 182 from the second longest tee box, a mis-hit tee shot here means at least a 5 on your card, if you’re lucky.

And oh yeah, it also means teeing up another ball because the one you just hit is long gone, likely on its way to Japan via the Pacific Ocean tides.

The tee shot is all carry over the ocean and rocky shoreline with the front of the green guarded by a large bunker.

To top that off, a breeze into your face makes the shot even more daunting but this hole is one that sticks in your mind forever, no matter what you score.

No. 14 - We’ll give you a bit of a breather here again with a ‘simple’, and pretty par 5 hole from the grass on the Old Blue course in Wailea.

Their 14th hole is a short 480-yarder that offers a wide fairway lined with flowers and trees that calms the nerves of any golfer having one of those “worst-ever” days.

This is the ninth hole at the Gold Course in Wailea, a short 333-yard par 4 which features two amazing hazards – an outcropping of black lava rock which starts just a few yards off the tee and runs for over 100 yards out– not hard to carry but still kind of intimidating.

Then, your second shot must traverse the ground in front of the green covered by a number of bunkers. The green is slightly elevated so you have to fly your ball in here – again not that tough to read about but nerve-racking when you stare it down – so choose your club wisely.

At only 326-yards you have to hit the fairway and then keep your second shot to a dramatically elevated green from straying too far left. If you go that way there’s a sharp drop down to no-man’s land and getting up and down from there is no simple chore.

No. 17 - Another par 4, this is a sharp dogleg left but you stare straight into the Pacific Ocean, which has to be the largest water hazard in the world, from the tee box.

Since the hole is but 321-yards it isn’t intimidating, at least until you hit your drive too far and into the lava or off-line to the left in trying to shorten the hole even more and get caught up in the trees.

When you stand over your approach shot, it looks as though the green runs directly into the ocean, a neat concept but relax – there’s plenty of room over the back if you go long.

No. 18 - There’s only one great finishing hole in Maui County and that’s the one everyone’s seen on TV – the last hole at the Plantation Course.

This is a beast – 585-yards for the ‘normal’ player but a massive 663-yards from the back tees. The secret here is simple – hit a good drive that’s aimed at the chimney on the clubhouse, which is visible in the distance.

Do that and your ball will hit the top side of this huge fairway – it’s probably about 70-yards wide at a minimum – and catch the speed slot. By the time the ball quits rolling most players will have the opportunity to go for the green in two, but it’s not quite that easy.

Since the ball is taken left, it means your second shot, if you go for the green, is all carry over a huge crevasse that can be intimidating.

Most players tend to lay up to the right side and short of the green, leaving an easy chip to a large green that is well protected by bunkers.

To me, this grouping of 18 holes is the one that stand out the most to me on the islands of Maui County. The thing is, there’s likely another 18, or more, that are just as good in someone else’s eyes because one thing there is no shortage of here is beautiful, fun to play golf holes.

About the writer: Gord Montgomery is the sports editor of two weekly newspapers in the Edmonton area and is a member of the Golf Journalists Association of Canada. He has written for Inside Golf for the past four years with the majority of his coverage in north and central Alberta.

He can be reached at noraltagolf@gmail.com