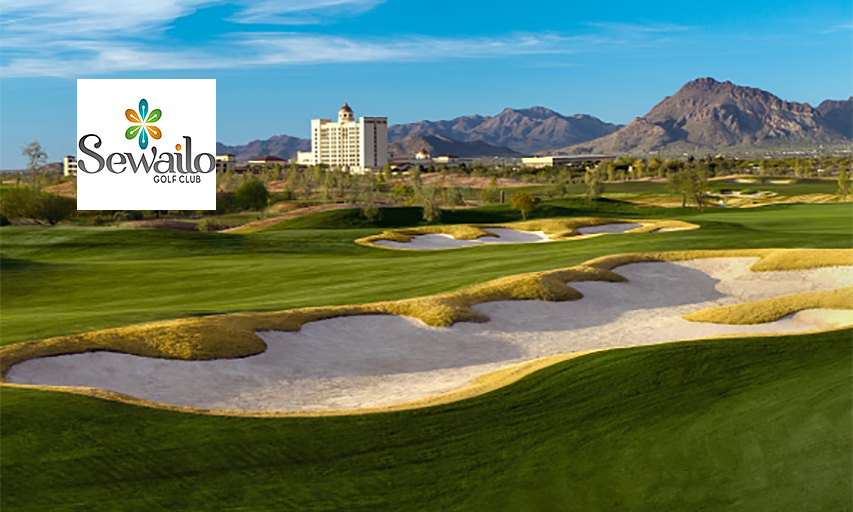 Designing a golf course which appeals to the entire golfing community is one of those 'you can't please everyone' types of propositions.

The latest creation from relatively new course designer Notah Begay fits into that category but the asterisk beside this one is the fact he has taken the building of a golf course in another direction.

Sewailo, which is managed by Troon Golf, is in the back yard of the Casino Del Sol in southwest Tucson.

It's the third course with Begay's signature on it following Sequoyah National in North Carolina and Firekeeper in Topeka, Kansas.

Sewailo makes its way across 100 acres of the Sonoran Desert and includes 14 acres of lakes which help tell the story of the Pasqua Yaqui tribe who migrated from Mexico to Arizona in 552 A.D. and settled in between the Yaqui and Gila rivers.

"There are three distinct aspects to the golf course," said Begay.

"We start off with the lush and the green with the lakes, then it gradually dies down into the streams and then in the centre section which is just desert and the natural terrain which is what we started with. Then we emerge back into where the streams start to appear, more water and then we end up with the waterfall."

Landscapes Unlimited joined forces with Begay and moved out 30,000 trees and shrubs along with hundreds of saguaros, then began the replanting process in order to make Sewailo, which means "Flower World", into what it is today.

"Once we go through a couple of seasons here you're going to see the golf course really mature into probably one of the most scenic and colourful golf courses in this section of the country," Begay said.

"It was a perfect storm with vision and leadership from the (Yaqui) council and members of the community. Just always so proud of their culture and understanding that."

It's that component of this golf course which makes it more than a solid desert layout with a casino nearby. Begay was aware of the fact there hadn't been a lot of golf course development in the United States recently and this project gave a lot of very talented people in the golf industry the opportunity to work on home soil for a couple of years.

But there was an added bonus to locating Sewailo where he did as he was able to involve the locals in the building process as well as the operation of the course.

"That makes me really proud as we taught a lot of people from the Pascua Yaqui community how to get into the golf industry and those are always things that are very important to me," Begay said.

"The one thing I expressed to every member of my team is that we're working for the community." That statement isn't just empty praise.

Begay is a man who has walked the walk and so he can talk the talk. He readily admits he grew up in neighbourhoods like southwest Tucson.

Places which deal with unemployment, social issues and low graduation rates from high school so he accepted the challenge, making it to Stanford and leaving with a degree in economics.

That piece of sheepskin allowed him to do a lot, see plenty and provide him with the opportunity to give back to those same communities by showing them how a golf property could benefit them as a whole.

"I did understand the economic benefits of it," said Begay. "How it could be a catalyst to more growth within the community but also how it can address some of these issues related to unemployment. We're providing jobs to our community both with the construction and also once the doors are open."

Those doors are wide open now with play on Sewailo officially starting in early December (2013) and what you’ll see is an efficient course which challenges you to keep your wits about you as you make your way around.

There are some elevation changes off the numerous tee boxes and one feature which stands out is the expansive fairways you are teased with. If you do take the safe route your ‘reward’ is being a little further removed from the green, presenting a second shot which might be a little tougher than you bargained for.

"If you want to have shorter clubs into the green then you have to take on the hazards," Begay said. But hey, your ball is on the short grass right?

The tenth is a dog leg right with water protecting the right side and bunkers at the end as the fairway runs out from a landing area.

If you navigate that safely you still have a somewhat blind shot into a green with a narrow entrance.

Begay says this hole is one which leaves the player with nowhere to go so you are needing to hit a good golf shot and you see what you are made of, he said.

"You stand on that tee and think, well the further left I go it's going to make my second shot harder so I need to really challenge that water but I really don't want to."

The finishing hole may be considered the signature hole with the cape green and the waterfall but for me I really embraced the look of the 3rd hole.

It's not a hard shot but because of the water in front it makes it appear a much tougher hole but the green is huge and there is room deep if you hit that sweet spot.

Begay says it was one of those holes which just "appeared" when they looked over the site. "Just with the scenery in the background with the casino and the mountains."

Another pair of holes which will be engrained in your memory are Number one and Number eight as they share the same green.

Begay says he fell in love with double greens while playing at The Open Championship at St. Andrews and so this 23,900 square foot monster is his tribute to the course and the history surrounding the place where golf originated.

But when it comes to his personal notation in the history books Begay is on the fence if he'd like to be remembered as a great golf course designer or as someone whose community service for the native people left a positive footprint.

"We're trying to just change these young people's outlooks on how they approach certain things and golf is a great way to do that," Begay said.

"How can this golf course be used as a catalyst to create change, introduce programs and service the needs of that community. I think that is something which is in my DNA and it's not saying how much money can we make and how much can we charge."

I think he answered the question.