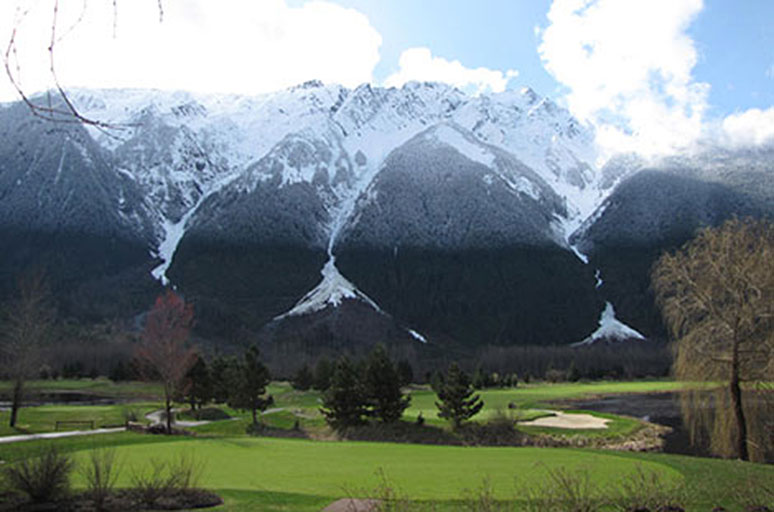 by Gord Montgomery, Inside Golf

When a golf course, such as Big Sky Golf & CC in Pemberton, B.C., receives the accolades it has in the recent past, it’s easy to sit back and live on one’s charm.

That, though, isn’t the way the operation runs at this scenic track in the Pemberton Valley.

Among the many honours this track, situated in the Whistler area of beautiful B.C, has garnered include, among others:

As such, it would be easy to sit back, read the rave reviews and simply let the public flow in, but that’s not the way things are done here, said Holly Nunn, the resort’s Sales and Events Manager.

“I think it’s about finding the right people to do the job. We pride ourselves on the fact our team is very passionate about their jobs.”

That shows, not only through the awards the facility has earned over the years but also through the on-going process of showing people those honours are rightfully deserved. “In every department we want every part to excel.”

A greens’ renovation is currently being completed at Big Sky, and as such it shows that the facility isn’t content with what was. They want to be the go-to place on a continual basis and are displaying that by fixing things when the need arises.

“They were kind of older and we’ve always been known as having 100 per cent bent grass greens. Over the last two years a more dominant species of poa (anna grass) has kind of creeped through and it doesn’t handle our interior climate weather very well.

And then we get the almost extreme desert temperatures in the summer. We had almost drought-like weather last summer, with 30 to 40 degree temperatures and that kind of took its toll on the grass,” explained Nunn. “The time has come.”

Other improvements being undertaken at the same time are being done on the practice facility, including a three-hole practice loop and improving the bunker structures in that area so they better replicate the course’s sandy areas.

While there are other big name courses in the area, including the Whistler-brand tracks, Nunn said her course stands shoulder-to-shoulder with them and isn’t overshadowed in any way.

“We pride ourselves on the tranquility of the setting at Big Sky. There are no homes around the course, no highways. All around you, it’s just mountains. It’s so peaceful. With the lakes and rivers that surround us, it’s pure golf.”

Big Sky sets itself up as a player-friendly facility given its numerous tee boxes and wide fairways. Yet at the same time the Robert Cupp design offers challenges for all. There are seven, yes seven, tee boxes in total ranging from 7,001 yards all the way down to 5,208 yards so there’s a spot for everyone out there.

“Cupp is known for his rolling hills along the course. It is a challenging course but at the same time it is suited for any level of golfer,” said Nunn in a quick course overview.

“We have won awards (yes, more honours!) for being very favourable for women’s play, the way the course is set up,” which includes the aesthetics such as flowers and shrubbery. “It’s about making women comfortable with the game. It’s manicured but in a natural, rustic kind of way. It’s quite beautiful.”

Another plus for Big Sky is the length of the playing season when compared to that of its neighbours. Since Big Sky is nestled in a valley, its climate is more moderate meaning they get onto fairways and greens sooner and play longer.

With this year’s rebuild of the green complexes, May 15 is being set up as opening weekend and the year usually stretches well into September and beyond, said Nunn.

“We want to make sure when we open the doors this year everything is good to go and the course is 100 per cent playable,” she ended, noting that as always Big Sky is certainly ready to live up to its advance billing.