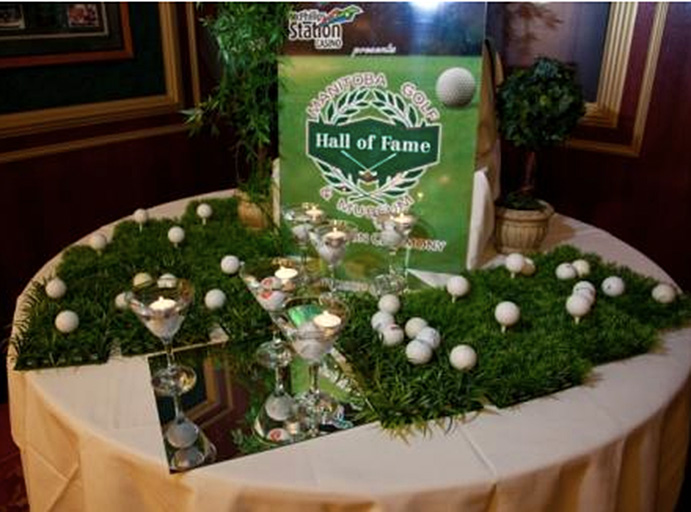 Included in the ceremony will be two men with very prominent British Columbia ties, Barrie McWha, GM of Blue Ocean GC on the Sunshine Coast and Len Harvey, Teaching Professional at Predator Ridge.

“Manitoba Liquor & Lotteries is delighted, to once again, host the Manitoba Golf Hall of Fame Induction Ceremony,” said Manitoba Liquor & Lotteries CEO, John Stinson. “This year’s inductees have made extraordinary contributions to the game of golf in our province, and they have each proven their dedication and merit for this distinct recognition. Congratulations to each of the inductees and their families.”

“In this, the 100th year of Golf Manitoba, we are pleased to be able to recognize the outstanding accomplishments and contributions to the game over many decades by this year’s Honoured Members. Their inclusion in the Manitoba Golf Hall of Fame is very deserving recognition of all that they have done to advance the game of golf in the province.”, said Don MacDonald, President of the Manitoba Golf Hall of Fame and Museum Inc.

The Manitoba Golf Hall of Fame & Museum Inc. was formed to acknowledge the contributions and accomplishments made by Manitobans as competitors, both amateur and professional, builders and course superintendents to the game of golf. It is a tripartite organization, the partners being Golf Manitoba, Manitoba Golf Superintendents' Association and the Professional Golfers Association (PGA) of Manitoba.

In addition to the annual inductions, future plans include enhancing the ability of the public to access information about members of the Golf Hall of Fame and Manitoba's rich golfing history as well as to assist golf clubs in preserving their heritage.

Individual members and member clubs wishing to nominate an individual (amateur or professional golfers, superintendents, builders, media, etc.) for the Manitoba Golf Hall of Fame may obtain nomination forms through any of the three member organizations or from the following website:
www.manitobagolfhalloffame.com

Harold Eidsvig enjoyed a remarkable golf career as both an amateur and a professional for the better part of a decade in Manitoba. Born in St. James-Assiniboia, he developed his love for the game as a caddy at St. Charles in the late 1920's. Eidsvig's relatively late start playing golf at age 18 in 1932 makes his later achievements even more remarkable.

He captured two Manitoba Amateur championships and four Manitoba Open titles in a span that covered 1946-55. The first amateur crown came in 1946 and was followed up with a double as Manitoba Amateur and Open Champ in 1947.

Eidsvig turning professional at Assiniboine the following year, marked the 1948 Canadian Open as one of his fondest memories. He reclaimed the Manitoba Open title in 1949 and was instrumental in the formation of the Manitoba Professional Golf Association according to local golf historian Al Hackett in his book Manitoba Links: A Kaleidoscopic History of Golf.

When George Daniel retired after the 1949 season, Hal Eidsvig took over as pro at Niakwa, a position he held with distinction from 1950-59. During that tenure he captured his third (1952) and fourth (1955) Manitoba Open titles.

Joined the Canadian PGA in 1967 as an apprentice under Bill Thomson, Head Professional at Southwood G&CC in Winnipeg
In 1968 attended the first golf business school organized by the PGA of America in Kansas City
In 1969 became Head Professional at the Wildewood Club in Winnipeg
In 1970 moved to the Calgary G&CC as an Assistant Professional
In 1971 moved to the Canyon Meadows G&CC as Assistant Professional under Head Professional Frank Fowler
In 1973 moved back to Southwood G&CC in Winnipeg to become Head Professional
In 1977 was elected President of the Manitoba PGA in 1978 represented Manitoba PGA on the National Board of the Canadian PGA
In 1979 established new course record 64 at Southwood
In 1981 recognized as Head Professional of the Year in Manitoba
In 1983 elected to a two year term as President of the Canadian PGA
In 1985 became General Manager of Southwood G&CC in addition to being Head Professional
In 1990 resigned and moved family to Qualicum Beach Vancouver Island, in 1992 was named Director of Golf at Fairwinds Golf Resort on Vancouver Island
In 1995 managed the PGA of BC Trade Show and Consumer Golf Show under a five year contract
In 1997 became General Manager / COO of Glengarry Golf Links in Qualicum Beach - later led the rebuilding of the golf course and the rezoning of the property to be a destination resort with 18 hole championship golf course and golf academy with a new brand - Pheasant Glen Golf Resort
In 2006 left the company to pursue consulting opportunities
In 2008 joined the BC Golf House Society as Executive Director and stayed there until 2012.
Currently the GM of Blue Ocean Golf Club in Sechelt, British Columbia