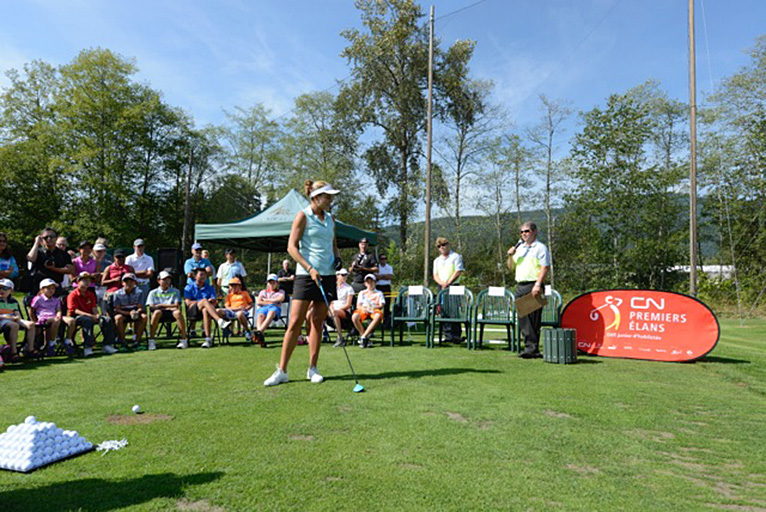 When the top players from around the world travel to Vancouver for the CP Canadian Women’s Open one of the great things they do is give of their time for various events surrounding the tournament itself.

Not far removed from being a junior herself, she’s already a ‘veteran’ at the ripe-old age of 20, women’s world number 8 ranked Lexi Thompson came out to Seymour Golf & Country Club in North Vancouver on the Monday of tournament week to put on a clinic for a group of young aspiring players for CN Future Links National Junior Golf Development.

There are five clubs from around the Lower Mainland with CN Future Links junior instruction affiliation, Beach Grove, Riverway, Mayfair Lakes, Solid Approach Golf Academy at McCleery and of course the host for this event, Seymour G&CC.

The host for the day was Seymour’s Head Professional Dale Schienbein, who has twice been recognized as the PGA of BC’s Junior Promoter of the year.

As Schienbein said about hosting the event, “As a National Junior Golf Development locale, when Golf Canada called, well, we couldn’t be happier to help out.”

The official title of the event is ‘A Day With A Puma Athlete’, and if anyone defined that description it would have to be the 5-time winner (7 professional wins overall) on the LPGA Tour including one major in the Kraft Nabisco Championship, Lexi Thompson.

It seems golf was always destined to be a big part of Lexi’s life as she explained that she’s lived on a golf course all her life and started playing at age 5 following the lead of her two older brothers. She also played basketball and soccer but golf was the sport that caught her fancy.

With the rapt attention of around 30 youngsters, and probably close to that many ‘not-quite-as-young-sters’ Lexi went through her normal warm-up routine on the range at Seymour, explaining what she was trying to accomplish as she went along and taking questions - which she practically had to beg for because it was so quiet while everyone watched her swing the club. 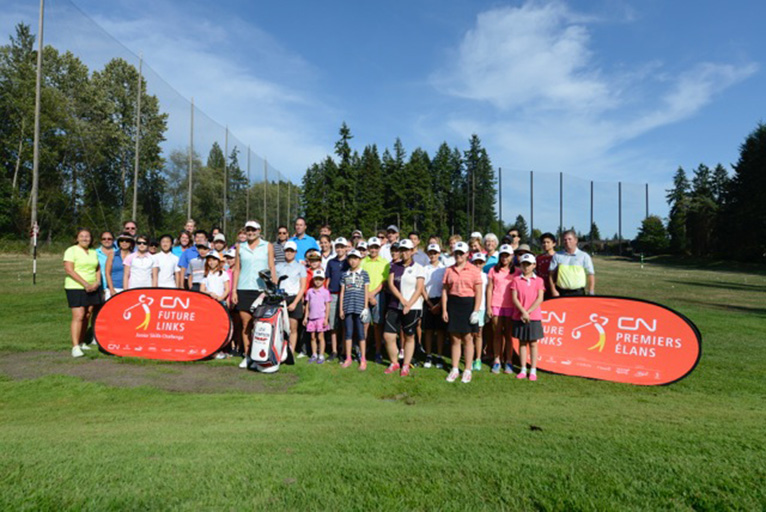 Her candid responses and uplifting attitude put everyone at ease and suddenly it seemed more like it was just a visit with a family member who happens to be one very good golfer.

As people asked her questions it was interesting to see her make a point of clearly identifying whoever had posed the query saying, “I like to look at people when I talk to them.”

One particular response that many could identify with was her reply to the question of whether she ‘works’ the ball and which way. Thompson paused and said, ”I just try to focus on hitting it straight.” She then added with a grin, “If I can find my golf ball I’m usually pretty happy.” Chances are most listening would concur.

And let it be said, she does hit the ball very straight, with the occasional slight draw. A very nice ball flight.

After she went through her warm-up routine working through her irons and up to her ‘favourite’ club, the driver, which again would seem to be in keeping in step with the majority of those in attendance, Thompson then took the time to go up and down the range to visit with and offer advice to all the kids as they hit balls.

The day finished up with each and every youngster getting autographs and posing for an individual photo with Thompson.

Asked just what it is that seems to suddenly be producing all these fine young players at this time, Thompson, thought for a moment and said, “ I don’t think it’s any one thing. But I do think it’s possible for younger girls to be successful if they put in the work and the time. You really have to have the right mindset.”

There is no question that the game of golf has a great future in front of it with the likes of Thompson, Canada’s Brooke Henderson and other fine young players willing to give back and be solid role models for the next generation.