South Korea’s Shin Hye Kim, sits tied for third after her (-4) round of 68 shot her up the leaderboard, at (-2) 214 for the tournament and just three strokes behind her countrywoman.

Denmark’s Cecilie Bofill is tied with Kim at (-2) 214 after her (+2) round of 74. Bofill had it going early, with three birdies in her first five holes before giving it all back and more in her final 13 holes.

On a sunny, but windy day when only five players broke par, South Korea has a commanding lead in the team competition, as its (-15) total of 417 is 11 shots clear of the second-place Swedes and 13 ahead of the third-place Danes.

It was a vastly different story for Team Canada 1 and 2, which features five girls from British Columbia.

Richmond’s Kathrine Chan played the best round of the six Canadians in the tournament. Chan, who had two birdies in her last three holes of her second round, continued her charge early in the third round, with birdies on two of her first five holes.

While she wouldn’t make any more birdies the rest of the way in, she did limit the damage with just four bogeys for the rest of her round. “The wind started blowing and it came from a different direction than during our practice rounds,” said Team Canada 2 coach Mike Martz. “It was a tough day for everybody and I’m happy with how Kathrine played in these tough conditions.” 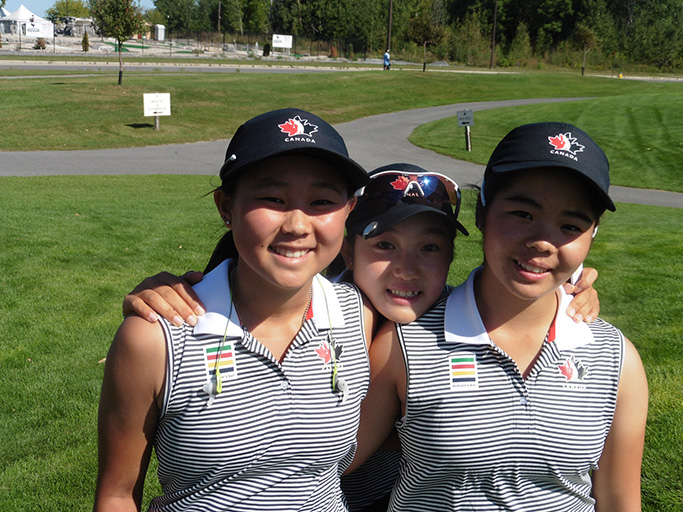 Team Canada 2, Featuring, From Left Alisha Lau, Euna Han And Kathrine Chan, Is The Highest Placed Canadian Team In The Team Competition After Round 3 Of The World Junior Girls At The Marshes In Ottawa

Chan was happy she could contribute a low score to her team. “I’m really happy that I was able to help my team,” said Chan. “I’m trying to get better every day and I’m just trying to play my own game, have fun and shoot the best score I can.”

Chan’s teammates had a tougher day on the course, with Coquitlam’s Euna Han shooting a (+7) 79 and Richmond’s Alisha Lau shooting a (+13) 85. “From a team point of view, it’s nice to see how each of them props the others up,” said Martz.

“On day 1, we had Alisha and Euna’s scores counting, and then on day 2 it was Alisha and Kathrine. Today, it’s Kathrine and Euna so you can see they’ve all chipped in, they all feel like they’re contributing to the team.”

For full scores from Round 3 of the World Junior Girls at The Marshes, please click here: