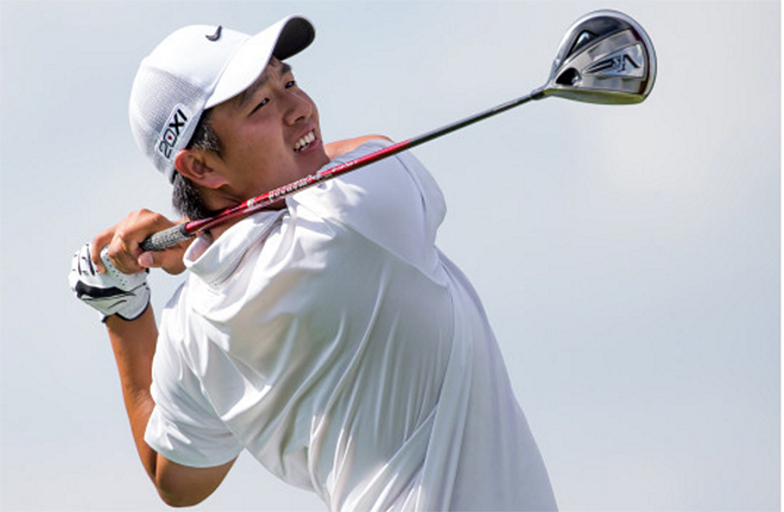 Eugene Wong is off to the Web.com Tour in 2016. The No. 7 ranked professional golfer in Canada from North Vancouver finished tied for 27th at the season-ending PGA Tour China Series event in Dongguan. The result was good enough to keep him inside the Top-5 on the Tour’s Order of Merit, giving him status on the Web.com Tour next year. The result also saw Wong pick up two places in the world rankings.

Justin Shin, the No. 12 ranked Canadian pro, was sitting fifth on the PGA Tour China Order of Merit at the start of the tournament. Despite shooting back-to-back 69s on the final two days, his 27th place finish wasn’t enough to retain his position. Shin slipped to No. 6 on the money list, but the native of Maple Ridge, B.C., will have a chance to earn status on the Web.com Tour through the qualifying tournament from December 10-13.

On the women’s side, Jessica Wallace of Langely, B.C. rose one spot in the world rankings to move into the Top-10 in the Canadian rankings. Wallace earned Symetra Tour status by finishing in a tie for 64th at the recently-completed LPGA Tour Q-School.

Maude-Aimée LeBlanc, the No. 5 ranked pro in Canada, earned her way back onto the LPGA Tour for 2016 after finishing in a tie for fourth at Q-School. It will be her second go-round on the top women’s tour, having previously qualified back in 2011.

Anne-Catherine Tanguay (No. 12 in Canada) and Samantha Richdale (No. 7 in Canada) both earned conditional status on the LPGA Tour after finishing in ties for 36th and 41st, respectively.

For the fifth straight week, Jared du Toit of Kimberley, B.C., holds down the top ranking among Canadian amateurs. There were positive gains overall for every Canadian golfer within the Top-20 this past week. Alastair Tidcombe and Alistair Docherty made the biggest moves, picking up 11 and 10 spots, respectively, in the world rankings.

Outside the Top-10, James Fahy and Josh Whalen each gained 15 places in the world rankings to maintain their standings. In fact, every one of the 220 Canadian amateurs listed in the world rankings made positive gains with Emile Menard (Ange-Gardien, Que.), Manitoba Men’s Amateur champion Devon Schade (Beausejour, Man.) and Pierre-Alexandre Bedard (Chibougamau, Que.) leading the way, each picking up 17 places.

On the women’s side, Team Canada National Team member Maddie Szeryk continues to hold down the No. 1 ranking. Eight of the Top-10 golfers and 17 of the Top-20 all made positive gains this past week, while Jaclyn Lee (No. 8), Anica Yoo (No. 9) and Selena Costabile (No. 13) all maintained their standings. 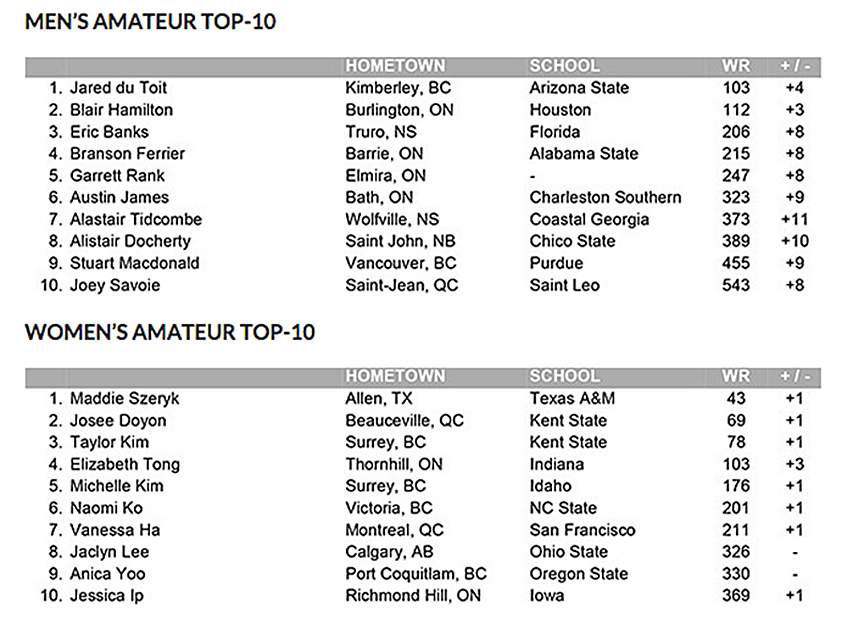