They Said It: An Interview With Nick Taylor 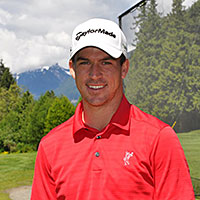 With an amateur career that rivals the best to ever play the game in not only B.C. or Western Canada but all of the country - (with all due respect to Doug Roxburgh) - Abbostford, British Columbia's Nick Taylor is beginning to show the same consistent skills as a young professional that had him ranked as the number one amateur in the world for a 20 week span in 2009.

Gearing up for his season on the PGA Tour Canada circuit, the 25-year old Taylor came out of the gate flying on the local Vancouver Golf Tour (VGT) and after a couple of top 10 finishes put together a string of 3 straight wins in the VGT's Major Series.

Taylor wasn't quite done yet as would add two more first place finishes to his run making it five in a row.

Inside Golf Magazine caught up with the 2007 Canadian Amateur Champion and 2010 Ben Hogan award winner in West Vancouver just prior to the VGT - Golf West Van shootout on a beautiful sunny day at Gleneagles Golf Course.

inside Golf: What can you tell us about the Vancouver Golf Tour (VGT) and what it has done for your game?

Nick Taylor: This is, I guess, my second full year playing it, It's been a great tour - kind of in between - for guys like me, living in Arizona for half the year so if I come home for a couple of weeks I usually have an event I can play and keep sharp. And the summer as well, with the Canadian Tour (PGA Tour of Canada)not having a really full schedule, there's always been, when I come home, one or two events I can play (on the VGT), keep sharp, keep going. And they're run so well, with courses that I've grown up on, it's been so good and Fraser (VGT Tour Commissioner Fraser Mulholland) does such a good job with communicating with all of us and with running the events and with such good sponsors, there's nothing bad I can say about it, that's for sure.

iG: What are your thoughts on the takeover of the Canadian Tour by the PGA TOUR and of course renaming it the PGA Tour of Canada as they come on board to try and help maintain the growth of the game here in Canada?

NT: I think it's great, it gives a lot to play for now obviously. I think over the next few years the competition out there is going to get more and more fierce, at least. Just look at the Q-school, there was 312 guys this year and over the last couple of years there's been 'max' maybe 100 guys at each one, so that's going to be big with the Web.com spots, that's something to play for. Try every shot, obviously, make every dollar you can - just so at the end you can hopefully get that top 10 at least and ….my goal is to win it this year, but anywhere in the top 10 would be great to move on.

iG: When did you first know that golf was going to be how you made your living?

NT: Probably about halfway through college. I started to realize I could play with and beat some pretty good players. I played a little hockey, basketball, baseball - a lot of other sports, but I always enjoyed golf.

iG: And of course you're on a pretty good hot streak right now, with - is it 3 in a row on the VGT Tour?

iG: Who has been the most influential person in your development as a golfer and is there any one teacher you would credit for helping you with your game to this point?

NT: Well, obviously Matt Thurmond (head coach at the University of Washington where Nick was a two-time Pac 10 player of the year and Ben Hogan award winner) played a huge part in helping me realize my potential. And Rob Houlding, I've seen him for the last 4 or 5 years, whenever I've been home. I started with him kind of halfway through, after my first year (2007), at school. And then I've been with him since, I don't see him probably as much as I want or he would want..or both but that's just the nature of me playing pro golf and travelling all the time. So, yeah, he's probably the main teacher I've had over the last 4 or 5 years. Really what we've been working on recently is kind of simple things with kind of posture and alignment-type stuff that can get pretty wonky and can really screw up a lot of things more than just mechanics. So, just trying to keep it simple and it's been working.

iG: What would you consider the most significant moment, to date, in your golf career?

NT: That's a good question….You know, individually, probably the U.S. Open is up there for sure. It's maybe what I'm recognized for sometimes…you know, a lot of college wins that I'm proud of, um, some of the awards…school-wise with team accomplishments - we won the Pac 10 (at the time, now Pac 12) championship back-to-back years which was just, memories our team will have forever so that's pretty cool. Pro career, nothing really crazy. I've played well at times, not as consistent as I would have liked, so the last few weeks is probably the best I've played as a pro - consistently, with every part of my game, it's nice to start coming around, hopefully I can keep that going on the PGA Tour Canada.

iG: Tell us what it is about Ledgeview Golf Club in little old Abbotsford, B.C. that has produced so many top flight golfers? (Besides Nick Taylor, Ledgeview GC has also been home to James Lepp, Adam Hadwin and Ray Stewart to name a few)

NT: Probably the fact that it's not an overly long course, it's quite hilly with a lot of slope to the greens, so it really develops your short game. I never really thought about it but, yeah, because there isn't an actual practice facility you would just play a lot of rounds of golf, rather than just pound balls at the range. It really made you think your way around the course, learn how to manage your game, especially the short game. As you got a little older you could always add a little length to your game.

iG: Where do you see yourself as far as your career in 5 or 10 years from now?

NT: Well, I definitely want to win the PGA Tour of Canada order of merit - the Web.com Tour spots are a really good motivator - and then make it onto the PGA Tour.