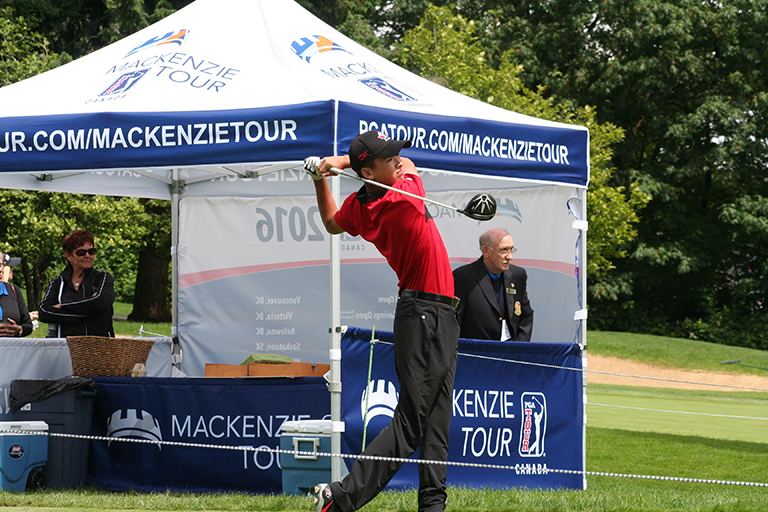 A.J. Ewart knows his time at Point Grey Golf & Country Club this week is all about experience and trying to soak up whatever he can on the biggest stage of his young golfing life.

But the 17-year-old Coquitlam resident, last year’s B.C. Juvenile Boys champion, is also hoping to make a few birdies. He made only one in Thursday’s first round of the Freedom 55 Financial Classic, the season-opening event on the Mackenzie Tour-PGA Tour Canada circuit.

A few wayward drives cost Ewart as he opened with a four-over 76, but he wasn’t going to let that sour him on what he recognizes is a great opportunity.

“This was a complete new learning experience for me,” Ewart said after his round. “I can’t really be too down on myself after today. Yeah, I didn’t play well, but it’s all about the experience.” Ewart and fellow Golf Canada national development team member Tony Gil of Vaughan, Ont., were given sponsor’s exemptions into the tournament.

It is Ewart’s first taste of life on the pro stage and if he had any butterflies, he wasn’t admitting to it. “I found out I was going to play here about a week ago,” Ewart said. “I was super excited. I wasn’t really nervous. I was just anxious.”

And a bit cold. His round on Thursday was played in cool conditions, with some occasional drizzle.  “My back has been bothering me for a while and I just got off to a bad start,” he said. “I tweaked my neck halfway through the round and had some trouble off the tee. But other than that I scraped it around pretty well.”

The Freedom 55 tourney is the start of what will be an extremely busy late-spring and summer schedule for Ewart. After playing in the B.C. High School Championships for his Gleneagle Secondary team in early June, Ewart will head to Japan as part of Canada’s Junior Golf World Cup team.

One event that Ewart has circled on his calendar is the B.C. Junior Boys tourney in early July at Arbutus Ridge on Vancouver Island. Ewart has already won the B.C. Bantam and Juvenile titles and would like to complete a triple crown of sorts by adding the B.C. Junior trophy to his collection.

A.J. Ewart Has Big Aspirations For His Future In Golf

Actually, his aspirations are even bigger than that. “My goal this year is to win B.C. Junior and after that the B.C. Amateur,” he said. “To win all four would be amazing. I don’t know if anyone has done that.”

Ewart’s exploits have not gone unnoticed. He was highly recruited by a number of top U.S. schools and recently committed to Arizona State University, where he will start in the fall of 2017. “I had a few schools in mind, but I really wanted to go to ASU and they gave me a pretty good offer,” he said. “So I took it and I am excited.”

Ewart will join Arizona State just as current B.C. Junior champion Jared du Toit of Kimberley is leaving. Du Toit is just finishing his junior year at ASU and will be playing for the Sun Devils at next week’s NCAA Championships in Eugene, Ore. “I got to know Jared through junior golf and he is on the national team, so we are good friends,” Ewart said. “He was able to tell me lots of good things about the program.”

Ewart knows he will need a solid second round Friday if he is to have any chance of surviving the cut and playing on the weekend. “I have to hit the ball way better off the tee,” he said. “I think I only hit five fairways today, so that is how you shoot what I shot. I didn’t have too many birdie opportunities.”

Doug Roxburgh, the 13-time B.C. Amateur champion who worked in player development for Golf Canada for several years, thinks opportunities like the one Ewart is getting this week at Point Grey are invaluable.

“I think it is a big opportunity,” Roxburgh said. “Some people say, well, why are we throwing a young kid out there. What if he shoots two 78s and finishes last, it could destroy his confidence and all that. Well, I have never felt that way. I always felt you could go to an event and you could learn something about your own game and about how others approach it. I think it will be good for A.J.”