International Olympic Day A Big Hit At The Richmond Oval 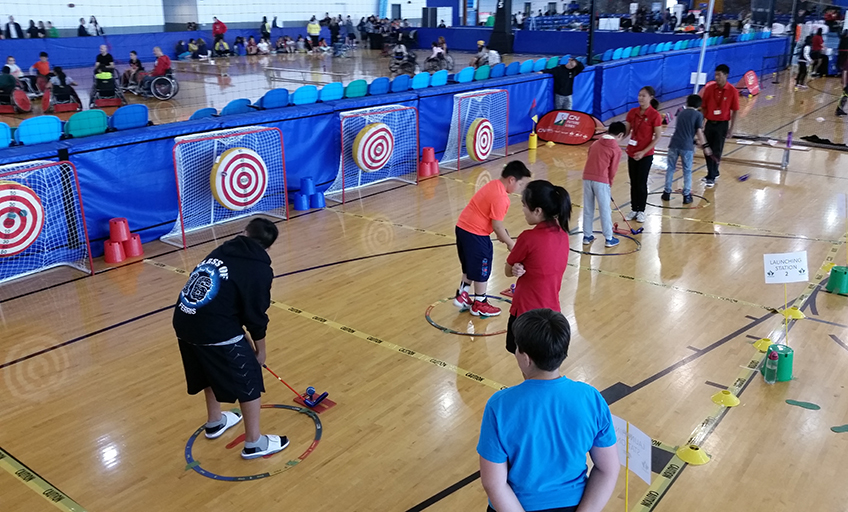 With 13 sports represented, International Olympic Day provided students with the opportunity to realize the skills required to play sports across the sporting landscape. At our British Columbia Golf station the skills of ball striking and rolling were on full display.

With 8 stations accommodating both skills our collegiate-level volunteers were able to spend one-on-one time with every student who participated, giving helpful tips, and words of encouragement during the golf orientated drills.

At the ball striking station students were taught proper feet alignment with respect to the golf ball, as well as, how to place the golf club behind the ball creating a proper golf stance. Once completed, our volunteers would give the students a quick tip on how to properly strike the golf ball for pure contact. It was a similar concept at the rolling station, except this time the students were taught the proper technique to roll a putt accurately.

Of course the most important aspect of this process is to have fun, and our BC Golf station accomplished that by using miniature tennis balls replacing a traditional golf ball, and having the students aim their golf swing, and putts at enlarged velcro dartboards with a bullseye.

Ezzabella Hernandez, one of the collegiate volunteers, said the students who participated really enjoyed the game, and wanted to continue playing. “Many of the kids really enjoyed trying to hit the bullseye on our targets. They even kept asking if they can do it again. Overall, the kids had a lot of fun and really enjoyed themselves.” 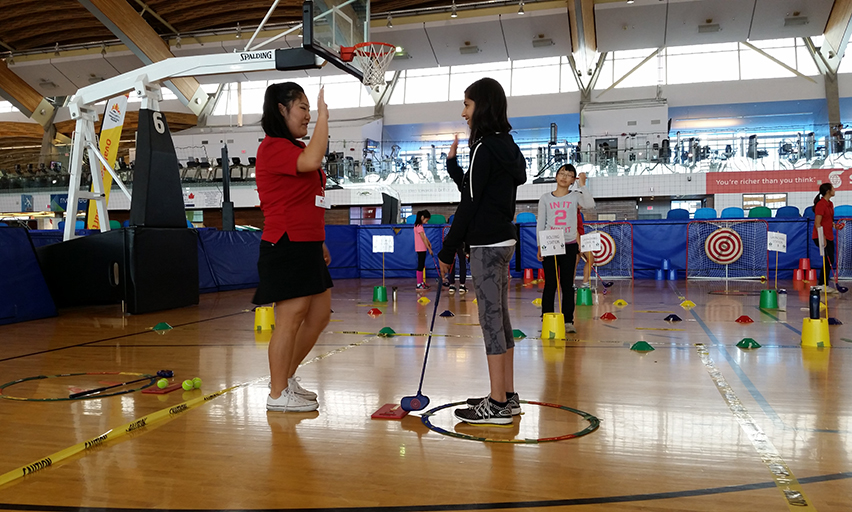 Furthermore, what would International Olympic Day be without actual Olympic athletes? Over a dozen past and present Canadian Olympians were on hand at the Richmond Oval to show their support, sign autographs, take pictures, and speak with the students on the importance of living an active lifestyle and being involved in sport.

Brent Hayden won Olympic Bronze in the 100 metre freestyle at the 2012 London games, he says International Olympic Day is a great way to give the students an opportunity to meet, and connect with Olympians.

“We’ve all been walking around since the day started working with these kids in the various events that they have going on, and signing autographs so it’s been really great for these kids to be around Olympians and get to interact with them….You never really know what’s going to inspire the next generation, dreams all start somewhere and I imagine that there’s a number of dreams that are being started here today”.

Hayden also expressed that students shouldn’t give up so easily on their sporting aspirations.

“Do it if you love it, there’s no other reason more than that, that you need to be doing something or to stop doing something. Talent and all that can all be developed in time, but really the first thing that has to happen is you've got to learn to love the sport, and do it with passion, and do it with heart”

The Richmond Olympic Oval will continue to host International Olympic Day moving forward, and hope that they can build on every year with increased participation, while introducing new sports.