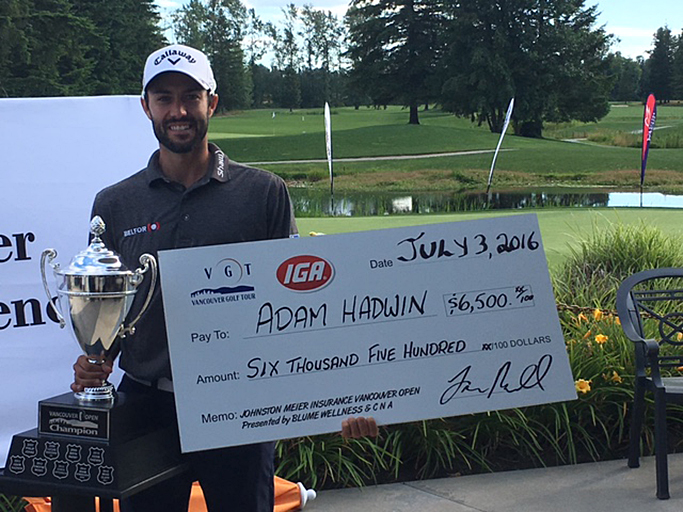 The best player in the field won the Vancouver Open, but it wasn’t as easy as you might think for Adam Hadwin. The PGA TOUR regular from Abbotsford needed five back-nine birdies to take command of the Vancouver Golf Tour’s marquee event at Pagoda Ridge Golf Course in Langley.

Hadwin completed his Vancouver Open hat trick with a 54-hole score of seven-under par 207. That was two shots better than Mission’s Kevin Stinson and Riley Wheeldon of Courtenay.

“I just missed a (birdie) putt on 12, made a nice one on 13 to kind of get the ball rolling and another nice one on 14 and then just birdied both par 5s (16 and 18),” said Hadwin, who began his back nine with a birdie on the par 4 10th hole.“I was kind of steady, the short game was good today. I still wasn’t comfortable hitting the ball but I played a lot smarter today that I did Saturday and got it around the golf course much better.”

Hadwin’s presence in the field was in part a favour to Vancouver Golf Tour commissioner Fraser Mulholland. Hadwin played lots of VGT events after turning pro in 2009 and credits it with helping him get to the PGA Tour. “I started here on the VGT in 2009 and I think it helped me tremendously to set myself up for future years,” Hadwin said after his round.

Hadwin carried his own bag -- an old British Columbia Golf Association team bag from years ago -- around Pagoda Ridge on Sunday. He is in the midst of a long break from the PGA TOUR and said the Vancouver Open came at a perfect time for him.

“Fraser always puts on a great event. I love coming out and supporting the tour and being part of it and catching up with everybody I haven’t seen forever. It gives me an opportunity to play against some good competition up here. I haven’t played much lately, so I had to test my game to see where I was at and what I need to work on.” 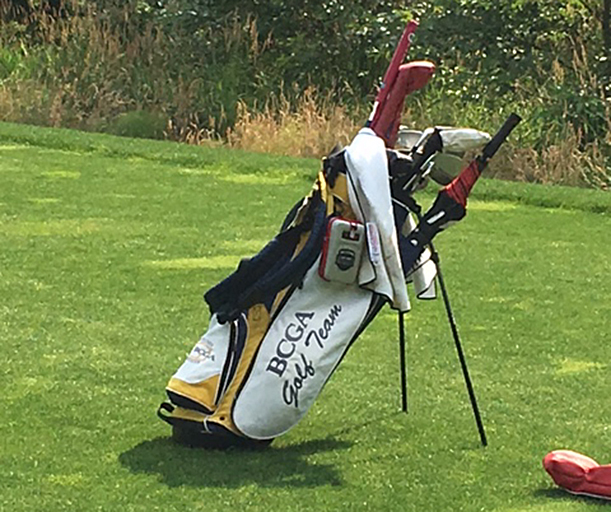 Hadwin started Sunday’s final round one shot behind second-round co-leaders Stinson and Chilliwack amateur Connor O’Dell, a member of the University of the Fraser Valley golf team.
“It was a lot of fun coming down the back nine with Kevin,” Hadwin said. “We kind of went shot for shot there. I just scraped in a couple more putts there than he did.”

Stinson, a former PGA Tour Canada regular who does not have status this year, rolled in a birdie putt on the 18th green Sunday to claim a share of second place with Wheeldon. “It’s tough,” said Stinson, who earned $3,000. “He’s a PGA TOUR player and he’s making everything and I’m missing everything, so it’s hard to compete. But it was a positive finish and I was happy about that. For the amount I have been playing, it’s good.”

O’Dell, meanwhile, was just trying to soak up as much of the experience as he could. He struggled at times, closing with a four-over 76 to finish tied for seventh place at one-over par, but called playing in the final group a great experience.

“I was talking to my dad earlier today and I said my goal was to come out here and suck as much knowledge as I could out of those guys,” O’Dell said. “That is how you get better, learning from guys who are better than you. I was studying how they did things and trying to improve.”

“And it is such a great experience for local players who we are trying to give experiences to. You don’t get a better experience than to play against a PGA TOUR player.”

For complete scoring from the VGT Tour CLICK HERE

CHIP SHOTS: Oliver Tubb of University Golf Club had Sunday’s low round, a six-under 66, and tied for fourth place with Langley’s James Allenby at three-under par . . .Brady Stead of Royal Colwood Golf Club in Victoria was the low amateur at even-par. The Vancouver Open was sponsored by Johnson Meier Insurance. The first round was played at Ledgeview Golf Club in Abbotsford, with the final two rounds at Pagoda Ridge.