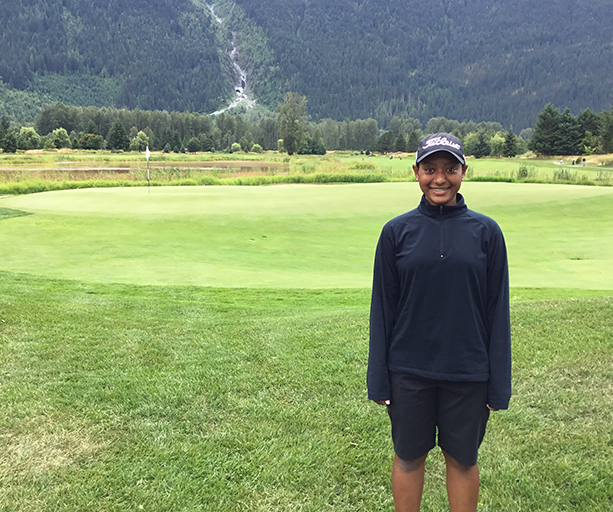 After round one of the BC Junior Girls Championship at Big Sky GC in Pemberton it’s 16-year old Sumie Francois in the lead after firing the only sub-par round of the day, a 2-under 70. Francois, who plays out of Shaughnessy G&CC, holds a two shot lead over last week’s runner-up from the BC Women’s Amateur, Delta’s Mary Parsons, who posted an even par round of 72.

This is Francois’ first time playing Big Sky and she carded four birdies and two bogies in a round where she stuck with mainly 3-woods and hybrids off the tees in a conservative approach she employed saying, “I do hit my driver pretty far and I didn’t want my misses to be big ones.”

Francois started with four straight pars before hitting a wedge to about 20-feet on the par 3 5th hole and rolling in the birdie putt. She then parred three of the final four holes on the front nine with the lone blip being a bogey on the par 4 8th.

After two more pars to start the back nine she suffered her second bogey of the day on the par 4 12th but promptly got that right back on the next hole, the par 5 13th, when she chipped her 3rd shot from the fringe to within a foot for a tap-in birdie to get back to level par.

That seemed to energize the 2013 BC Juvenile Girls’ champion who says her goal is to attend a Division 1 NCAA school and has had discussions already with the Boise State women’s golf coach.

Two more solid pars on 14 and 15 were followed by back-to-back birdies at 16 and 17 as she made putts from 6 and 12 feet respectively. A par on 18 finished off her back nine score of 2-under 34 and set her up for her second round tomorrow.

“I am excited to be in the lead, but for tomorrow, I just want to stay calm, focus, and enjoy myself,” said Francois.

Alone in 3rd place is Richmond’s Kathrine Chan at 1-over (73) while Vancouver’s Tiffany Kong sits in solo 4th at 2-over (74) with Tiegan Taylor of Kelowna and Surrey’s Hannah Lee rounding out the top five tied at 3-over (75).

Big Sky Golf Club, a Robert Cup design, is situated at the base of 8,000ft. Mount Currie in the valley of Pemberton, surrounded by lakes & rivers and features bent grass fairways, tees, greens and Ravensdale sand bunkers. The course has four sets of tees and is playing to 5,761 yards and a par of 72 for this championhip.

Round 2 of the 2016 BC Junior Girls Championship tees off at Big Sky Golf Club tomorrow at 7:30am.

In the Best-Ball competition, which runs concurrently during the championship, the team of Kathrine Chan and Tiffany Kong are tied for the lead with Mary Parsons and her partner Amanda Minni at 4-under par. Sumie Francois and Claire Lovan are one shot back in 3rd place at 3-under.

In the Zone Team competition, Amanda Minni and Mary Parsons of Zone 4 have a commanding 10-shot lead after the first round over the Zone 3 team of Esther Lee and Shania Remandaban.