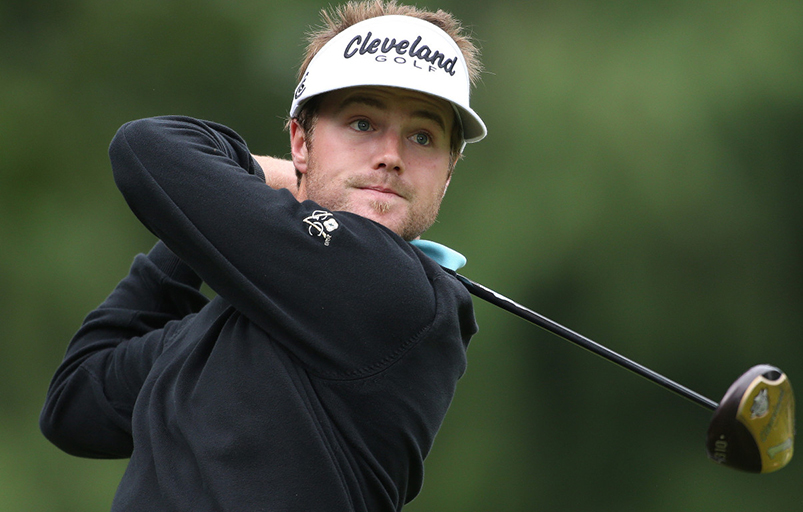 A bogey-bogey finish proved costly for Langley’s Adam Cornelson, who lost in a three-man playoff Sunday at the Mackenzie Tour-PGA Tour Canada stop in Ottawa.

Cornelson looked to be in control late in what was a soggy final round of the $175,000 National Capital Open, but wayward drives on the 17th and 18th holes cost him. Cornelson ended up in a three-man playoff with Brock Mackenzie of Coos Bay, Ore., and Samuel Del Val of Spain. All three players finished the 72-hole event at 15-under par.

Cornleson was eliminated on the third extra hole and Mackenzie won the playoff on the seventh extra hole. “Today was a battle right from the get-go, the weather was tough and I was pretty happy with how I hung in there,” Cornelson said after his round.

"I had control of the tournament there and I had a chance to win on 18 and unfortunately it didn’t go in but I’m happy with how my game is progressing. It stings a bit but tomorrow will be good.”

Cornelson, who won the Mackenzie Tour event in Victoria earlier this summer, has made $53,493 this season. Last year, it took $57,040 to finish fifth on the money list. Cornelson was eliminated Sunday when he missed a 22-foot birdie putt on the third playoff hole. Mackenzie and Del Val both birdied that hole.

In addition to his official prize money, Cornelson earned $2,500 as the low Canadian of the week. “It was dumping rain and blowing 30 km/h and everything else goes out the window and I just tried to battle and get it done,” Cornelson said. “I was hitting a lot of good shots. Unfortunately it didn’t go my way but if you give yourself a chance that’s all you can do. Those guys made great putts, so good for them. If you told me at the start of the tournament that I’d be in a playoff I’d take it. 150 guys can win this tournament so to be in the top three I’d take that every week to be honest with you.”

The Mackenzie Tour resumes Sept. 1-4 in Baddeck, N.S. for the Cape Breton Open.

PLAYOFF BOUND: Abbotsford’s Adam Hadwin heads into the PGA TOUR’s FedEx Cup playoffs with his game seemingly in solid shape. Hadwin tied for 33rd at the Wyndham Championship in Greensboro, N.C. That was the final regular-season event on the PGA TOUR.

The top 125 players on the FedEx Cup money list are eligible for the first of four playoff events, beginning this Thursday at The Barclays at the famed Bethpage Black course in Farmington, Ny. Hadwin enters the playoffs in 84th spot on the FedEx Cup points list.

The field for the second playoff event, the Deutsche Bank Championship in Boston, will be limited to the top 100 players, while the final two events, the BMW Championship in Carmel, Ind., and the season-ending Tour Championship in Atlanta, will have fields of 70 and 30 players respectively. All four playoff events have purses of $8.5 million, so there is some serious money to be made.

Abbotsford’s Nick Taylor missed the cut at the Wyndham Championship and his 2016 season is done. Taylor finished the regular season 129th on the FedEx Cup points list. He remains exempt through the end of the 2017 season as a result of his win at the 2014 Sanderson Farms Championship.

British Columbians in the field include Samantha Richdale of Kelowna, Jessica Wallace of Langley, Victoria amateur Naomi Ko and Sue Kim of Langley. The tournament offers a purse of $2.25 million US. New Zealand’s Lydia Ko, fresh off her silver medal performance at the Rio Olympics, will defend the title she won last summer at Vancouver Golf Club in Coquitlam.

The LPGA Tour heads next week to Cambridge, Ont., for the LPGA Manulife Classic.

Svensson earned a cheque for $11,137 and now stands 56th on the money list with $78,106. He has clinched a spot in the four-event Web.com Tour Finals, which begin after this week’s regular-season finale in Portland, Ore.

TIME FLIES: This week will mark the 20th anniversary of the first Greater Vancouver Open, the PGA TOUR event that was played at Northview Golf Club in Surrey for seven years. Guy Boros of Florida won that inaugural event on Aug. 25, 1996. He earned $180,000 from a $1 million US purse. The tournament later became the Air Canada Championship.

CHIP SHOTS: The PGA of BC Championship goes Monday and Tuesday at Royal Colwood Golf Club in Victoria. An 84-player field will contest the championship, the biggest of the year for British Columbia’s club pros. The winner will take home $6,000. . .Congratulations to Phyllis Laschuk, who last week won her 15th club championship at Point Grey Golf & Country Club. . .Kelowna’s Samantha Richdale finished tied for 11th at the Symetra Tour’s PHC Classic in Milwaukee.