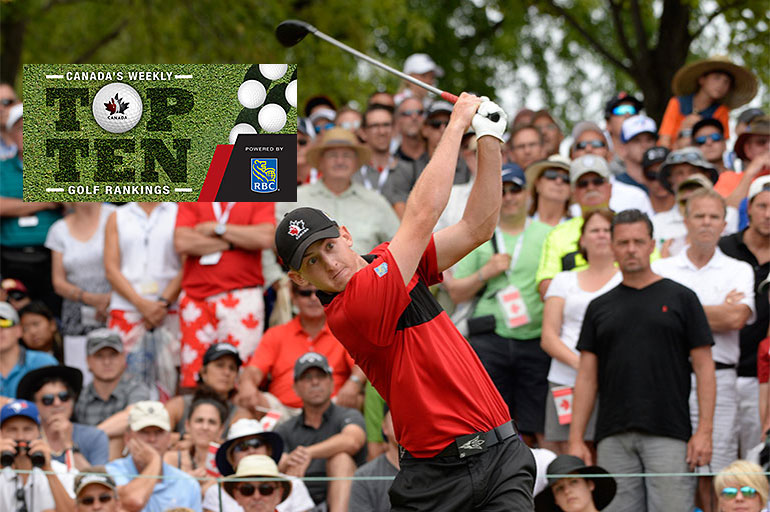 Kimberley, BC's Jared du Toit Saw His Fine Play All Year, Including A Top 10 At The RBC Canadian Open, Boost Him In The WAGR To 29th In The World - Image Credit Mike du Toit

Kimberley, BC's Jared du Toit was the number one ranked Canadian Amateur Male golfer for all but five weeks of 2016 and moved up an incredible 973 places in the Wordl Amateur Golf Rankings to finish the year ranked at No. 29 in the world.

Making the biggest leap up the WAGR was Victoria's Lawren Rowe as his play for the the University of Victoria Vikes vaulted him 1,207 places to become Canada's number 4 ranked amateur.

Three golfers finished the year in the Top-10 after beginning 2016 on the outside looking in including Mackenzie Hughes, who will finish 2016 as the top ranked pro in Canada.

Only Jared du Toit made a bigger gain overall, picking up 973 spots since entering the rankings in Week 29, making most of his gain following his tie for ninth at the RBC Canadian Open in Week 30.

The year was also noteworthy for those players who slipped out of the Canadian rankings, highlighted by 2003 Masters champion Mike Weir. He ended up losing 1,167 spots overall.

She may have not made the biggest gain in 2016 but Brooke Henderson may have had the most significant season of any Canadian professional golfer. The teen started the year as the No. 17 ranked female golfer in the world and within 12 weeks, she found herself inside the Top-10. Henderson made it all the way to No. 2 following her first major win, the KPMG Women’s PGA Championship. Three weeks later, she picked up her second LPGA Tour title. She would finish with 15 Top-10 results, banking over $1.7-million which left her third on the money list.

Two players broke into the Top-10, former college standouts Anne-Catherine Tanguay and Brittany Marchand, who made the biggest gain among any Canadian this year, picking up 468 spots since making her debut in Week 15.

Tanguay’s 200 place gain was just behind No. 3 Maude-Aimee Leblanc, whose 229 place gain underscored her return as a contending player on both the Symetra and LPGA tours.

Slipping out of the Top-10 this year was veteran Lorie Kane (No. 13) and Rebecca Lee-Bentham (No. 11), who has decided to bid farewell to the professional game. As well, No. 7 Jessica Wallace has decided to retire as a touring pro.

Jared du Toit caps off an amazing year atop the Canadian amateur rankings. The senior at Arizona State has seven Top-10 collegiate results so far this year, picked up medallist honours at the prestigious Glencoe Invitational and became the first Canadian amateur to record a top-10 finish at the RBC Canadian Open in 62 years, finishing ninth. He ends the year as the No.29 ranked amateur in the world, having been the No. 1 ranked player in Canada for all but five weeks this year.

Making the biggest leap this year was Lawren Rowe, who gained 1,207 spots in the world rankings to become the No. 4 ranked amateur in Canada. The NAIA All-American from Victoria has two wins and a pair of top-10 results so far this season for the University of Victoria Vikes.

Rowe is one of three newcomers to the Top-10 this year. Fellow Canadian university player Chris Crisologo (No. 7) and Ki Taek Lee (No. 10) each gained 259 and 430 spots, respectively in the world rankings.

No. 3 Hugo Bernard made the second biggest gain among the Top-10 this year, picking up 807 places in the world rankings. The Quebec golfer was crowned the national champion after winning the stroke play portion at the NCAA Division II Men’s Golf National Championship by two strokes back in May. He became the first-ever national champion in Saint Leo school history. Bernard captured the Canadian Men’s Amateur Championship and he has a tie for second in his only tournament appearance in 2016.

Maddie Szeryk completes her year-long reign atop the Canadian amateur rankings, sitting as the No. 32 ranked amatuer in the world. The Golf Canada National Team member already has five of the lowest rounds recorded at Texas A&M this year, including a personal best round of 63 back in September. She has a pair of third place results and another top-10 in four starts this year.

Among the Top-10, Chloe Currie was the only newcomer to the list, making the biggest gain by climbing 564 spots over the past year. The Mississauga, Ont. junior golfer posted several runner-up results at the CN Future Links Pacific Championship, Investors Group Junior Spring Classic and the Canadian Junior Girls Championship before successfully defending her title at the Ontario Junior Girls Championship. Currie capped off her year by becoming the first Canadian to win the prestigious Duke of York Young Champions Trophy in England.

The next biggest gain came from outside the Top-10 as Coquitlam, BC's Jisoo Keel re-emerged after a two year absence on the collegiate golf scene, picking up 315 spots and climbing up to No. 16 in Canada.