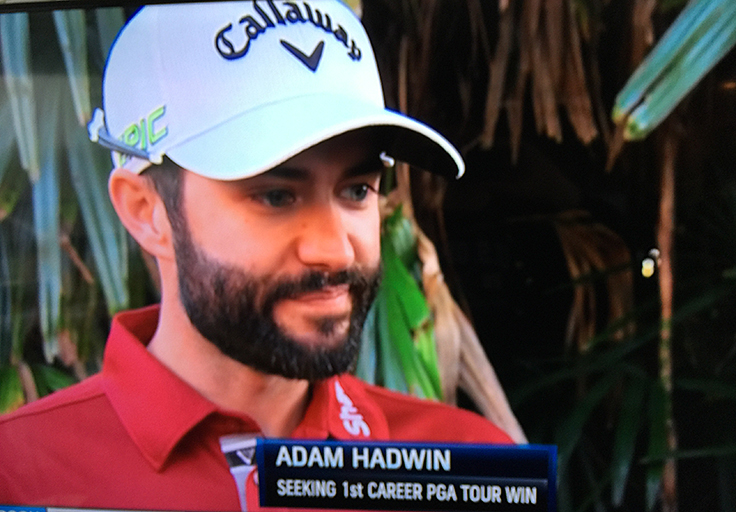 One of Canada's greatest golfers and considered among the best ball-strikers ever, 8-time PGA TOUR winner George Knudson said to me in 1981 that, "Each golf shot is worth one. Your opening tee shot, your fairway shot on 7, bunker shot on 13, your last putt on 18." That's exactly how Knudson related it to me and it's as fresh in my memory as if he had told me just yesterday.

On Tuesday of this week heading into the Valspar Championship, Abbotsford, BC's Adam Hadwin shared with me, "Your first tee shot, your fairway shot on 5, your last tee shot or last putt are all worth one," and that he is focusing very hard on that mindset, not trying to place too much importance on any one shot in particular, but rather going through the process to hit the best possible shot that he can at every opportunity.

I had a Deja Vu moment as he explained that to me and I then told him that the great George Knudson had said that to me 35 years ago.

I reminded him how strong Knudson's mind was to think that way. It was the reason why he won eight PGA TOUR events,  going three for three in sudden death playoffs. I told Adam that Knudson never thought of a tournament in terms of 72 holes or golf in terms of score but just the process of 'one'.

In his post-game interview following the 3rd round the first thing Hadwin talked about was that every single shot matters whether it's the first tee ball on Thursday or the last putt on Sunday.

He went on to say that he really learned that the last couple of years and he's proud of himself for grinding things out.  He also said he's worked very hard back in his new home in Phoenix, Arizona, is hitting the ball very solid and has been working on two key swing thoughts and he's been able to execute and hit the ball extremely solid in the swirling winds on this very tight tree-lined shot-makers golf course.

It appears he's arrived where both his skill-set and his mind-set have put him in a very good place right now. His eyes look very calm and very relaxed and to me he looks like he's perfectly prepared for this moment. This golf course is one where typically the best ball strikers win the tournament year after year and right now, tee-to-green, Hadwin is number one in the field as he's getting to the greens in the fewest strokes and closest to the flag on average.

He's becoming a great role model and everywhere I've gone people say he's a wonderful fellow. I've asked a lot of the other players, their caddies and the media and they all say the Canadians are great, humble, well spoken and they speak from their hearts.

For all up and coming young Canadian golfers, hopefully in the future - if all goes well on Sunday - they'll be able to talk about how they think 'one shot at a time' the way PGA TOUR winner Adam Hadwin did.