John Shin Captures PGA Of BC Championship Title In Playoff 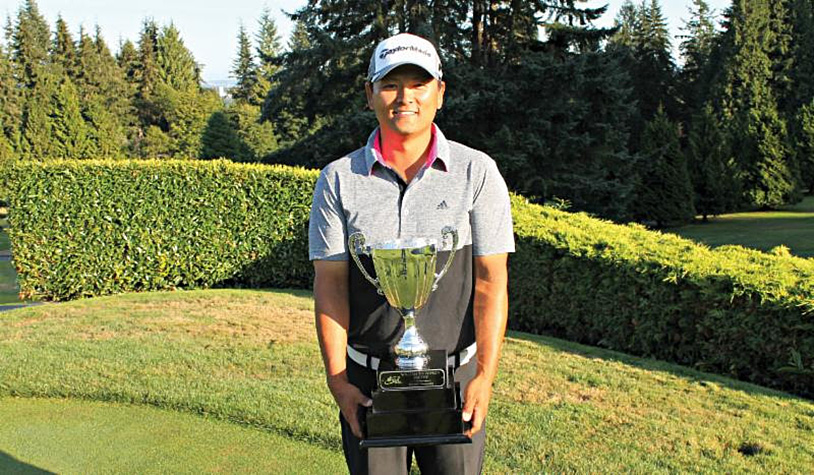 After carding a 4-under-par round of 68 to reach 3-under for the 36-hole championship, Shin went on to defeat Brady Stead on the second hole of a sudden-death playoff to secure the title at Capilano Golf & Country Club.

The Northview Golf Academy Professional made birdie on the 17th hole Friday to pull level with Stead and force the playoff, then birdied both extra holes to win the event for a first time. "It feels amazing," said Shin, 38. "To birdie the two holes in the playoff and get it done that way is surreal and I'm so excited to finish that way."

For most of Friday's final round, it looked as though the William Thompson Trophy could have ended up in a number of players' hands, as Stead (Royal Colwood Golf Club), Dave Zibrik (Point Grey Golf & Country Club) and Kevin Stinson (Cheam Mountain Golf Course) were among those who spent time at the top of the leaderboard.

But it was Shin's steady performance on Capilano's difficult back nine, featuring two birdies and one bogey, that helped him outlast a field of 98 other PGA of BC Professionals from around the province.

"When we played (the championship) at Royal Colwood last year, I finished seventh and I wanted to better that this year," said Shin. "To win the PGA of BC Championship at such a prestigious course, and with so many (notable) names on that trophy, is pretty special."

Stead became the player to beat late in the day when his tournament-low round of 67 made him the clubhouse leader at 3-under. He rolled in an eight-footer on the first playoff hole to match Shin's birdie, but a wayward tee shot on the second extra hole - Capilano's 18th - was too much for the 24-year-old to overcome.

"Obviously it wasn't the way I'd like to finish, but I played some really awesome golf today and I can hang my hat on that," said Stead. "This is my first year as a PGA Professional and it's been a great ride so far."

Zibrik was tied for the lead with three holes to play, but a bogey at the par-3 16th proved costly and he settled for third place at 2-under. Stinson, Phil Jonas (Philip Jonas Golf Academy) and Lindsay Bernakevitch (Victoria Golf Club) shared fourth place at 1-under.

With the victory, Shin collected a cheque for $6,300 and earned a direct exemption into the 2018 PGA Championship of Canada. But the championship win may not even be the most exciting thing that happens for him this weekend, as Shin's wife is due to deliver their first child on Saturday.

"I thought there was a slim chance it could happen today... I was checking my phone to make sure she wasn't ringing me," said Shin. "It got me thinking about some other things and (to) not get so intense out on the course. It's a win-win for me and it's pretty special."

As the low-scoring female in the field, Jennifer Greggain (Chilliwack Golf Club) was crowned as the PGA of BC Women's Champion for the third time. Starting the day with a one-stroke lead over Stephanie Wong (Point Grey Golf & Country Club), Greggain managed to stretch her advantage to six shots while playing in the same group as her competitor.

"I was really happy to play with Stephanie. It's awesome to have new, young players come into the Association. I just think the world of her and she's definitely going to have a nice career here within the PGA of BC," said Greggain, who raved about the setup at Capilano for the tournament.

"It was a battle out there," she said. "It was a very tough golf course and it reminded me a lot of a major championship, which was really fun to grind it out for every single shot you take out there."

All players who placed among the top 50 and ties earned a share of a prize purse totalling nearly $35,000.