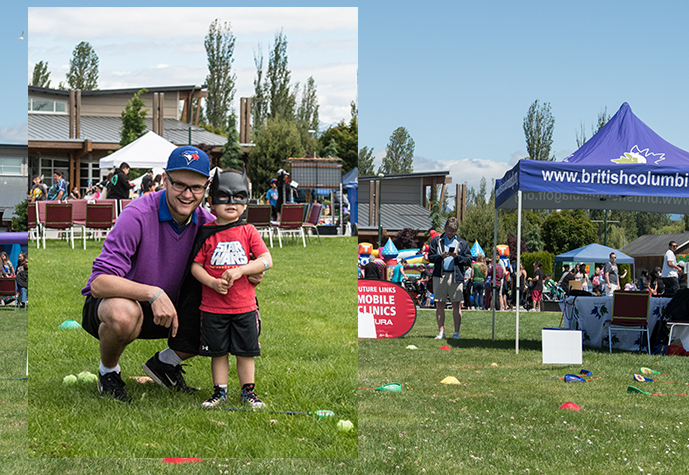 Tyler McKay discovered golf as a kid growing up in the West Kootenay community of Rossland and it wasn’t long before he became hooked on the game.

His biggest challenge is getting kids exposed to golf, so he spends most of his days doing just that. McKay sets up shop in parks and lets children take their first swings.

It wasn’t all that long ago that McKay was doing just that back in his Rossland home. His summers were spent playing on Birchbank Golf Course with his two brothers and his dad.

“I wanted to get in the golfing business because I love the game and its challenges so much and I found this opportunity,” he says. “I really like working with kids so it is the best of both worlds.”

On this day, McKay’s ‘office’ is Bear Creek Park in Surrey, where he unloads his van and sets up his SNAG course. SNAG -- an acronym for Starting New At Golf -- is kind of a cross between miniature golf and regulation golf.

The clubs are light and feature large plastic heads that makes it easier to get the ball in the air. And the ball is more like a tennis ball than a golf ball. It’s covered with an adhesive material that allows it to stick to targets set up on the ‘course.’ Bear Creek is full of kids and their parents and it isn’t long before a couple of inquisitive youngsters wander over to give it a try. Others quickly follow.

Claire Lovan, the new B.C. Juvenile Girls champion from Surrey, has dropped by to help McKay and the two of them spend the day helping kids take their first swings.

Some do better than others, but the goal is to just have some fun and McKay and Lovan offer plenty of encouragement. The kids seem to have a blast and each receives a prize -- an oversized sponge golf ball, a wrist band or a sticker. They also receive a Future Links Certificate of Achievement.

“Essentially it is a first-touch program,” McKay says. “This SNAG equipment is very user friendly and it shows the kids they can try golf out in an area that is not a stereotypical golf course. The SNAG equipment allows a kid to get the ball in the air, have some success and then they are inclined to want to play on a golf course later on in life.”

The focus is on fun, not fundamentals, on most of the visits to parks. “Other times we will teach full clinics, so we’ll go to a summer camp and we’ll set up and we’ll teach more of the fundamentals like how to swing a golf club, how to grip it properly, chipping and putting, etcetera,” McKay says.

“It really just depends on the location. Today, this is one of the (City of Surrey) Park Connect events so we are just out here. We will show some kids some of the fundamentals if they want us to, but we just want to let them try, let them have fun and show them that golf is an encouraging game, an accepting game.

“One of the things I have really noticed is that the return rate is high. A lot of kids will try it and they’ll come back in the afternoon and they will want to play again.

Sometimes the lineup just gets crazy and it’s just kids wanting to keep going. They don’t want to stop hitting balls. And that’s awesome. We try to direct the kids who are showing some skill and some interest to a driving range or course and let them play.”

The 21-year-old McKay parlayed his interest in the game into a scholarship opportunity at Lindenwood University in St. Louis. He graduated this past spring with a degree in business administration. Golf runs in the McKay family. His younger brother Brady is playing collegiate golf at Wilmington University in Delaware.

McKay, who also played hockey growing up, knows what a positive influence golf has had on his life and would like to see other kids get the same opportunity to play that he did.

“I think the No. 1 thing that it does is it takes a significant amount of time so it gives kids something to do for a lot of time. I think in all sports, but with golf in particular, once you start experiencing some success you really sort of get the itch and you want to keep going.

“I know that’s kind of how it was for me. I remember the first time I beat my dad, the first time I had a really good round. I actually remember when I was 10, I was playing really well and I thought I really want to do this, I really like this game and from that point on I switched my focus from ‘I am going to play on a line with the Sedins’ to ‘I want to be in the golf business.’”