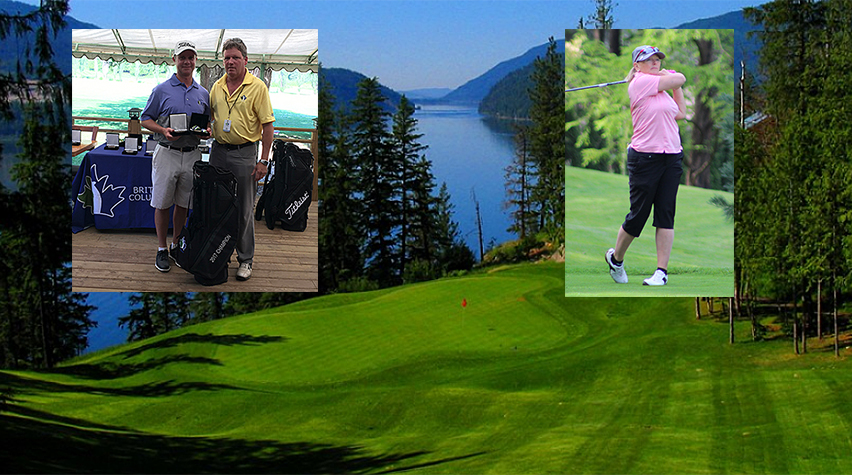 Last year’s champions will be in the field to defend their titles this week when Hyde Mountain Golf Course in Sicamous plays host to the B.C. Women’s and Men’s Mid-Amateur and Mid-Masters Championship.

Abbotsford’s Dan Swanson, recently reinstated as an amateur, should be a player to watch this week. On the women’s side, Parksville’s Josee Deslauriers won both of the Mid-Amateur and Mid-Masters titles last year at Kokanee Springs by four shots over Jackie Little of Procter. Little won her sixth B.C. Senior Women’s title last week at Crown Isle Golf Resort in Courtenay and is in the field this week at Hyde Mountain.

Spooner opened with an eight-under 64 at Chilliwack Golf Club on Saturday and closed with a three-under 69 at Sandpiper Golf Course in Sunday’s final round to finish the 36-hole event at 11-under par. That was three shots better than Edmonton’s Steven Lecuyer, who is now playing out of Bear Mountain in Victoria.

Nate Ollis of Victoria was third at seven-under par, while Evan Holmes of Vancouver finished fourth at six-under.

JUNIOR ACHIEVEMENT:  Coco Pei of Surrey and Victoria Liu of Vancouver have qualified to play in this summer’s U.S. Junior Girls Championship. Pei and Liu earned two of the four spots available at a qualifier at Fircrest Golf Club in Tacoma. Pei shot a one-over 74, while Liu carded a 75.

PETER THE GREAT:  Peter Thomson, the Australian golfing legend who died on June 20 at the age of 88, is best known for his five Open Championship victories. But Thomson won scores of other tournaments around the world and one of them was in Metro Vancouver. In 1985, Thomson won the du Maurier Champions at Vancouver Golf Club in Coquitlam, where he shot rounds of 64, 70 and 69 for a 13-under total of 203 to beat American Ben Smith by one stroke. Thomson’s first-place cheque was $24,850.90.

PAST CHAMPS: Nine members of the PGA of B.C. will tee it up at this week’s PGA Championship of Canada at Credit Valley Golf & Country Club in Mississauga, Ont. The B.C. contingent includes past champions Bryn Parry of North Vancouver (2013) and Victoria’s Jim Rutledge (1984). The 72-hole event begins Tuesday.

Hadwin and Taylor are both in the field at this week’s Quicken Loans National at the TPC Potomac at Avenel Farm in Potomac, Md.

BIRDIES FLY: The inaugural Lethbridge Paradise Canyon Open on the Mackenzie Tour-PGA Tour Canada circuit turned into a birdie-fest. Riley Wheeldon of Comox shot 14-under and finished tied for 29th. It took six-under to make the 36-hole cut.

T.T. Crouch of Mt. Vernon, Oh., beat Chris Williams of Moscow, Id., and Zach Wright of Baton Rouge, La., on the second-hole of a sudden death playoff to win the $36,000 top prize in the $200,000 event. The trio had finished at 23-under par. Taylor Pendrith of Richmond Hill, Ont., was the low Canadian. He finished at 16-under par.

The Mackenzie Tour now takes a break before resuming July 5-8 for the Windsor Championship.