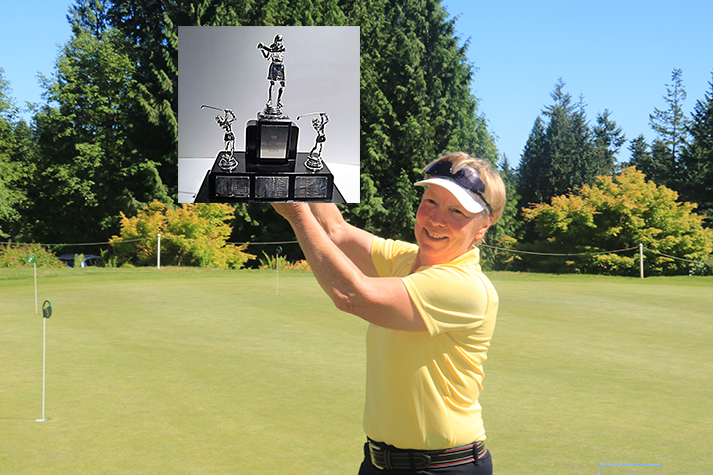 Karen Pultz of Peace Portal GC in South Surrey, BC has captured the Sweeny Cup title as the season-long leader of the prestigious competition named after and started by B.C. and Canadian Golf Hall of Fame member Violet Pooley Sweeny.

Pooley Sweeny started the Sweeny Cup competition in 1936, organizing the best female golfers from a variety of clubs to participate in a competitive golf environment.

The Sweeny Cup is a season-long golf competition open to ladies living in the Lower Mainland who are 19 years of age or older, are members in good standing of British Columbia Golf (Zone 3 or 4), and have a current handicap factor of 10.0 or less. The Sweeny Cup season typically runs from March until October with a series of one-day events at both private and public golf courses across the Lower Mainland.

Pultz, who won her first Sweeny Cup in 1996, successfully capped another golfing season capturing the prestigious trophy for a seventh time.

Pultz, 61, was away in Scotland but sent her acceptance speech when the Lower Mainland women’s league recently held its final wrap-up evening at Point Grey golf club. “It’s a wonderful opportunity to play with the best of the best women amateur golfers in the Lower Mainland,” said Pultz, who was a member of B.C.’s 2018 Senior Women’s team to the national championships at Lookout Point Country Club in Fonthill, Ontario this summer.

“Without Sweeny Cup most of us would never have connected to develop our tournament golf skills,” added Pultz who also competed this fall in the British Senior Championship along with fellow Sweeny Cupper Holly Horwood.

Each season, a roster of between 40 and 60 players – who must have an index of at least 10.0 or lower to play – compete in a series of up to 11 games at golf courses throughout the Lower Mainland. The winner is determined from the cumulative handicap differential based on a set number of games.

Players who sign up for a Sweeny Cup game quickly learn that they must adhere to local pace of play standards, dress codes and conduct set by hosting clubs who contribute an hour’s worth of tee-time each season. In past years, club support has come from clubs such as Beach Grove, Capilano, Chilliwack, Kings Links, Ledgeview, Marine Drive, Mayfair Lakes, Peace Portal, Point Grey, Quilchena, Richmond, Seymour, Shaughnessy, Squamish, Surrey GC, University GC, and Vancouver Club.

A sister organization known as the Harris Erickson league for 15-and-under handicappers exists in the Victoria region, and competes annually against Sweeny Cup members in an event known as the Huntting Cup. Both organizations are run by the players themselves – a formula that has enabled the Sweeny Cup to endure in spite of the vagaries of golfing trends and participation levels.

The Sweeny Cup is a culturally diverse group with players from private, semi-private and public clubs. In the past few years the Sweeny Cup has seen an increased interest from the Chinese Ladies Golf organization. Pultz, who is a local rules guru, and a Sweeny coordinator for 2019 along with Korean-born Kate Kim says that diversity is key to growing the women’s league – and to maintain the future of the sport.

"We are proud to be continuing Mrs. Sweeny’s legacy 82 years after the founding of this league,” said Kathryn McGarvey, a long time participant and Sweeny Cup administrator.

For more information on the Sweeny Cup, go to sweenycup.org (managed by Mary Feenan, Peace Portal)