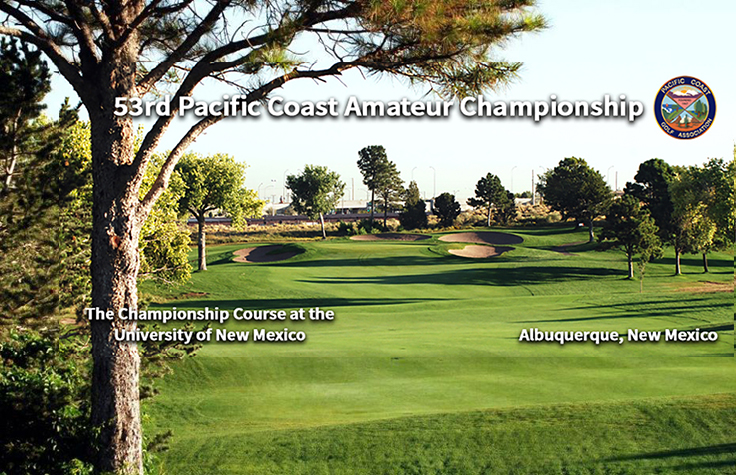 Federal Way, Wash. – The 7,248-yard, par-72 Championship Course at the University of New Mexico in Albuquerque will host the world’s most accomplished amateur golfers for the 53rd installment of the Pacific Coast Amateur Championship.

"The Sun Country Amateur Golf Association is honored to be the host association for this year's championship," said Dana Lehner, executive director of the SCAGA.

"We're no stranger to elite competition and know that the University of New Mexico Championship Golf Course will provide a phenomenal test for the best amateur players from around the world that flock to the Pacific Coast Amateur. The Land of Enchantment stands at the ready to play host to what is one of the premier amateur championships on the calendar."

The Pacific Coast Amateur routinely attracts players from around the world with resumés boasting illustrious victories in other jewel amateur golf events, and it remains the West Coast’s elite level event that is circled on all amateur golf calendars in North America and around the globe. The Pacific Coast Amateur has regularly received an “A” strength ranking by the World Amateur Golf Rankings (WAGR), provided by the R&A and USGA.

Most recent champions include Aaron Wise of Lake Elsinore, Calif. (2015), Will Zalatoris of Plano, Tex. (2016), Doug Ghim of Arlington Heights, Ill. (2017), and Isaiah Salinda of San Francisco, Calif. (2018). British Columbia's James Lepp won the event in his own backyard taking the title in 2003 at Capilano Golf & Country Club.

In 2018, Isaiah Salinda held off one of amateur golf’s most competitive fields to capture the 2018 Pacific Coast Amateur Championship at The Olympic Club – Lake Course. The highlight of the week was in the third round when Salinda made birdie on more than half of his holes, posting a new competitive course record of nine under par 62. Salinda went on to be a semifinalist in the 2018 U.S. Amateur at Pebble Beach.

Much of the recent success of the event can be directly attributed to the quality of the venue. “The nationally recognized Championship Course at the University of New Mexico will flash its versatility and do its part in identifying the best player as champion,” said Troy Andrew, executive director of the Pacific Coast Golf Association. “The quality of our field and our ability to continuously recruit the game’s best amateurs is directly attributed to the reputation and quality of the venue selected to host.”

The Championship Course at the University of New Mexico has been nationally recognized by Golf Digest as one of the top-25 public courses in the country. It has been the site of numerous regional and national NCAA championships, including several Division I Men’s Golf Championships.

“It is our honor and privilege to serve as the site of the 2019 Pacific Coast Amateur Championship,” stated Adam Roybal, general manager and PGA Professional of University of New Mexico golf courses. “We are accustomed to hosting elite amateur championships and are proud to showcase our nationally recognized facility. We are confident the Championship Course at UNM will provide a great test to the top-ranked amateurs from around the world.”

Past host sites for the event include The OIympic Club last year, Eugene Country Club (which also served as host site of the 2016 NCAA Men’s Golf Championship), as well as Chambers Bay, Bandon Dunes and Martis Camp to name a few.

For more information leading up to the championship in July, please visit www.pacificcoastamateur.com