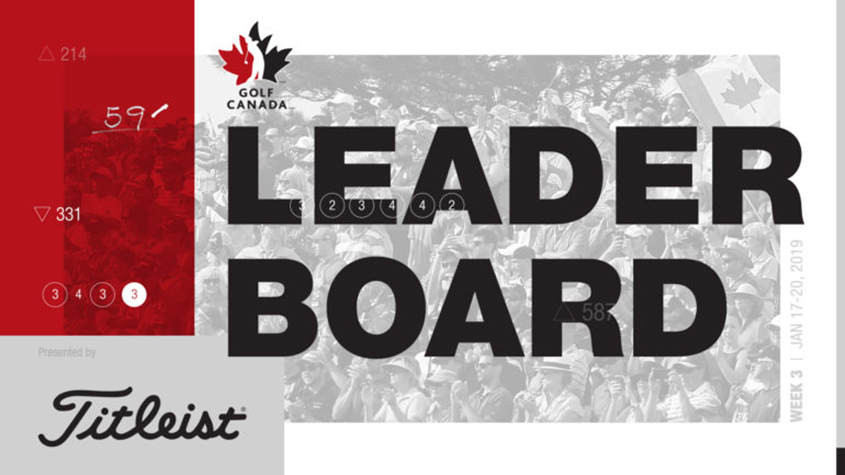 Justin Rose became the first player since 1995 to shoot all four rounds in the 60s at this event and did enough with his putter down the stretch to win the Farmers Insurance Open by two shots over Adam Scott. Mackenzie Hughes was the top Canadian, posting his best result in his last eight tournaments… Surrey, BC's Adam Svensson made the weekend cut for the third consecutive event and the PGA rookie has gained nine places in the all-important reshuffle which takes place in three weeks time… Abbotsford's Nick Taylor has picked up world ranking points in three of his last four tournaments… Ben Silverman made the cut for the fourth time in six events this season.

Rafael Campos became the first Puerto Rican player to win on the Web.com Tour, earning his first professional golf victory at The Bahamas Great Abaco Classic by one shot over Vincent Whaley. Ryan Yip just missed recording his first top 10 result on the Web.com Tour in almost a year by one stroke… Albin Choi has back-to-back top 20 finishes in the first two Web.com events for the first time since 2016. He currently sits 16th in The 25 points race…Michael Gligic was one of only seven players to post a round under par in the final round which was plagued by wind gusts as high as 61 km/h…Brad Fritsch was making his first Web.com start since last July and only his 7th start since returning from suspension last May

Bryson DeChambeau turned a one-shot lead into a seven-stroke victory to win the Dubai Desert Classic for his first European Tour victory and his fourth title in the last five months. There were no Canadians entered in the event.

NEXT EVENT: Saudi International
CANADIANS ENTERED: Aaron Cockerill and Austin Connelly are both on the entry list