The Ho Sung Choi Show Live, Along With Logjam At Top For AT&T Pebble Beach Pro-Am 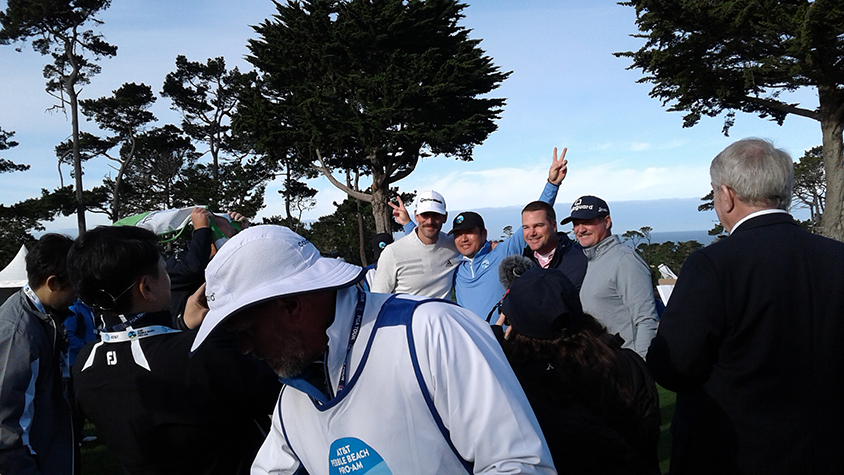 The movers and shakers and the superstars of the PGA TOUR were all at Monterey Peninsula Country Club Thursday morning.

There’s Dustin Johnson and Jordan Spieth, playing with their normal amateurs Wayne Gretzky and Jake Owen. Johnson and Spieth would each shoot (-5) and just two strokes back, both are definite contenders to win again at Pebble.

But who were the fans and media out to see? Yup, 45-year-old South Korean “Fisherman” Ho Sung Choi, who teed off with his amateur, actor Chris O’Donnell, fellow pro Jerry Kelly and Green Bay Packers quarterback Aaron Rodgers.

Choi is playing on a sponsor’s exemption, and all those wacky gyrations and celebrations were on full display to a North American public. Choi’s “move” comes primarily when he hits driver. When he hits irons, the “move” is more for show, as his lower body is quite stable through impact.

The bigger problem is Choi can’t hit greens in regulation and after scrambling for pars on his first two holes, he made bogeys on three of his next four holes and his feel-good story now feels like a one-trick pony story. 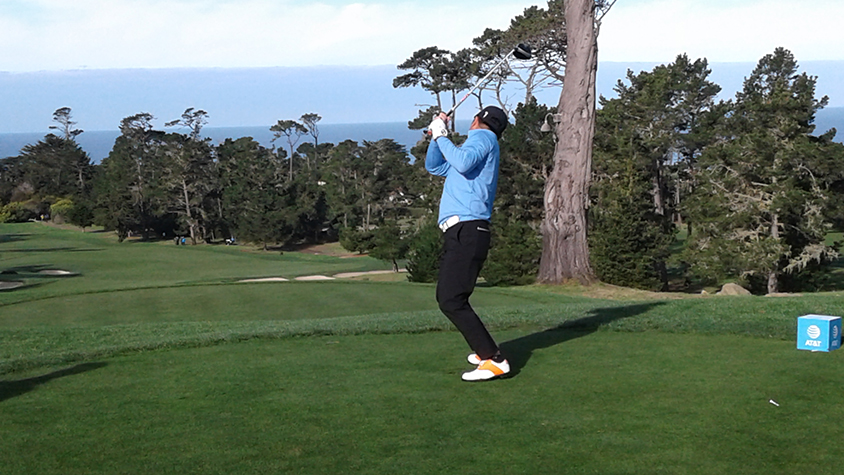 Welcome to the 2019 AT&T Pebble Beach Pro-Am, where something is happening somewhere at all times. With 156 professionals, 156 amateurs and three courses spread all through the Del Monte Forest along 17 Mile Drive, it’s a hard tournament to cover when the weather is nice, as it was today, let alone terrible, which is expected from Friday to Sunday as a massive system bringing lots of rain is set to pummel the Monterey Peninsula.

Perhaps that’s why there were so many fans out to watch Choi, who seems to have picked up some sponsorship, as he was toting what appeared to be a new TaylorMade bag, complete with Pebble Beach and his own logos.

Choi was also wearing a Pebble Beach logo hat and light blue pullover, which was in contrast to the plain white baseball cap he wore two days earlier for his pre-tournament press conference.

What they saw in Choi is a competent player with a self-taught swing who has willed himself, through hard work, to one of the biggest stages in golf. But at 45, there isn’t much runway left for Choi, other than as a novelty act, simply because his game isn’t spectacular in any way.

A decent driver, he misses fairways too often. Indifferent approach shots are saved by his scrambling ability, but that always catches up to a golfer. And his putting is average, which isn’t terrible, but not nearly good enough on the PGA TOUR.

Choi did enjoy meeting Rodgers and they shared a 'bro-hug' on the first tee, all while the crowd wondered why the Packers QB had a caddy sporting “Rogers” on his caddy bib.

Apparently, Tom Bradie [sic] was not available to play at Pebble Beach because he was too busy winning his sixth Super Bowl. Or is that somebody else?

Choi had four bogeys by his 10th hole, but found his game late, with three birdies to get his score to (+1) 72 for the day.

On the Canadian front, there are eight of them in the field, with varying results. Abbotsford’s Nick Taylor started out strong, with three birdies on his opening 9 holes at Pebble Beach before a bogey on his 10th hole stalled his momentum. He would get that stroke back one hole later, but it was pars all the way to the finish, as Taylor carded a (-3) round of 69.

Mackenzie Hughes, playing in a marquee group with Aussie Jason Day, got it as low as (-4) after four birdies in his first nine holes at Monterey Peninsula. But back-to-back bogeys derailed his momentum and a late birdie saw Hughes finish at (-3) 68 on the par-71 MPCC track. Ontario’s Ben Silverman got it as low as (-3) with three holes to play at Pebble Beach, but had to settle for a (-2) round of 70 at Pebble Beach.

Abbotsford’s Adam Hadwin couldn’t get anything going at Spyglass Hill, with three birdies and three bogeys for a pedestrian even-par round of 72. Surrey’s Adam Svensson had a four birdie, five bogey day at Spyglass Hill, finishing at (+1) 73.

Brantford, ON’s David Hearn shot a (+2) 73 at Monterey Peninsula while Ontario’s Corey Conners shot a (+3) 75 at Spyglass Hill and Merritt’s Roger Sloan shot (+5) 77 at the same track. At least they fared better than defending champion Ted Potter Jr. who carded a (+10) round of 82 at Spyglass Hill.

As for the actual leaders of the tournament after the opening round, that would be nondescript Americans Brian Gay and Scott Langley, who each shot a (-7) round, one stroke ahead of a group that includes Mickelson and Jason Day.

Friday is set to be a soaker, with the worst of the weather coming in around noon, so the PGA TOUR announced late Thursday that all tee times have been moved up an hour, with the first tee times at 7 a.m. and the last ones at 9:12 a.m.