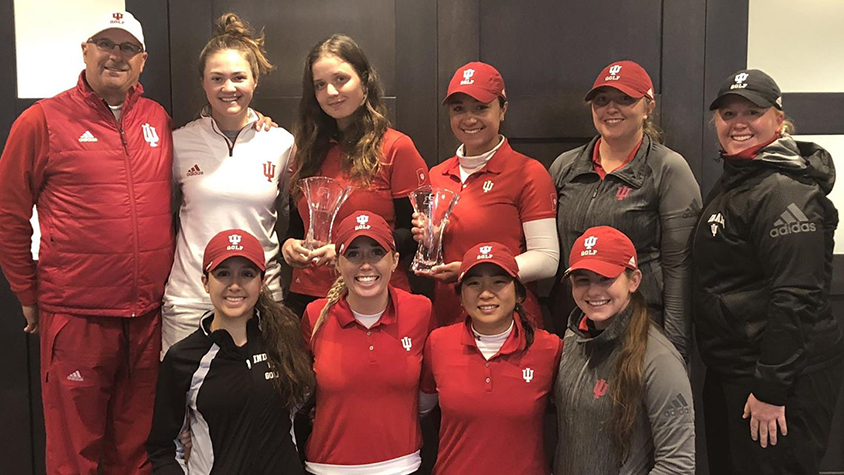 Sophomore Mary Parsons picked up her first collegiate win for the Indiana Hoosiers Women's Golf Team  after rounds of 70 and 66 put her at 8-under par, six shots ahead of second place Inez Wanamarta of Purdue.

Parsons led her team to the overall victory in the weather-shortened Lady Boilermaker Classic held in West Lafayette, Indiana.

After most of the players had completed 12 holes during the final round, lightning in the area of the golf course forced play to be suspended and ultimately called off for the day. As a result, the final results would revert back to the end of round two to give Indiana the win.

Parsons' second round 66 tied the IU record for the best 18-hole score, which she had set herself last year during her freshman year. The 136 total score through 36 holes is also a school record. Parsons led the entire field in Par 5 scoring, playing them in 5-under par over the first 36 holes. Her 10 birdies also led the field.

The win represents the first for IU since winning the IU Invitational in 2017 and is the eighth for head coach Clint Wallman at Indiana.

Indiana sophomore Priscilla Schmid finished in third place at 1-under par following rounds of 71 and 72, the best finish of her career. She played the back nine in 3-under par and was second in Par 5 scoring (-3). The first round 71 matched Schmid's best round of the season.

• The Hoosiers will move on to the Big Ten Championship at TPC River's Ben in Maineville, Ohio. The tournament takes place Friday through Sunday and is a 'Play 6, Count 4' format.