With His Surgeon Father Assisting, Burnaby's Belle Looks To Make The Cut In His Mackenzie Tour Debut 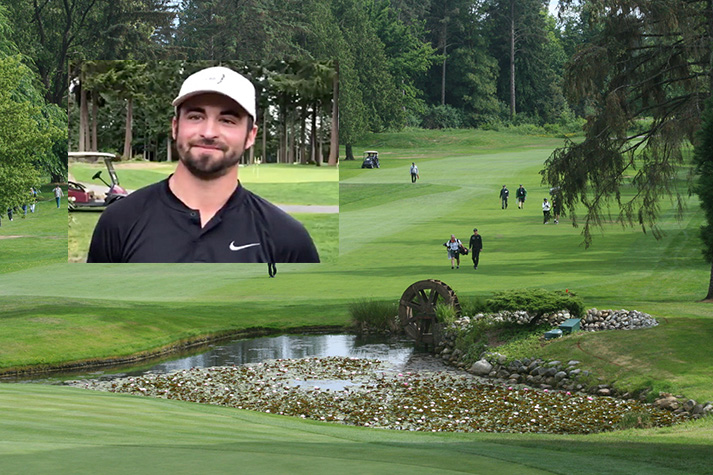 With His Father, A surgeon, By His Side As His Caddy, Burnaby's Michael Belle Is Looking To Make The Cut In His Mackenzie Tour Debut At Point Grey GC Next Week - Image Courtesy Twitter/BC Golf File Photo

Sure, Mike Belle is excited about making his debut on the PGA Tour Canada-Mackenzie Tour circuit at the season-opening Canada Life Open at Point Grey Golf & Country Club. Almost as excited as his dad.

When Belle finally earned his Mackenzie Tour status in what was his third attempt at qualifying school earlier this month, he knew right away who he wanted by his side at Point Grey. He asked his dad, Ralph, who introduced him to the game 20 years ago at Vancouver Golf Club, to caddie for him.

The two of them, often accompanied by Belle’s mom, Kim, have played more rounds than they can count over the past couple of decades.

“He has kind of been with me through the whole process,” the 26-year-old Belle says of his dad. “I have played with him since I was a kid, so he knows my game as well as anybody.”

To say Dr. Ralph Belle was touched by his son’s offer would be an understatement. The elder Belle, an orthopedic surgeon, was also a little surprised. "It is a great honour and I feel quite privileged,” Ralph Belle says. “It’s great that he thought of me. I had no expectations. I thought maybe he’d try and select one of the good players at Point Grey initially to caddie for him.”

That golf journey that started on the fairways of Vancouver Golf Club continued up the hill at Simon Fraser University, where Belle was a member of the golf team under late coach John Buchanan. Belle had a solid collegiate and amateur golf career. He was runner-up at the 2014 B.C. Amateur Championship at Seymour Golf & Country Club in North Vancouver, where Belle lost in a five-hole playoff to Jordan Lu.

He turned pro not long after that and has had to weather some potholes along the way. Belle failed in his first two attempts at the Mackenzie Tour Q-School at Crown Isle Golf Resort in Courtenay. But he persevered and credits the support of his family with helping him navigate through some tough times.

Belle has played lots on the Vancouver Golf Tour and worked on his game in the Arizona desert during the winter. He felt like he was making progress and that feeling was validated when he earned good status in his third trip to Q-School earlier this month at Crown Isle.

Belle shot rounds of 70, 69, 69 and 70 to finish tied for sixth place. By finishing inside the top 14, Belle is guaranteed starts in the first six events of the Mackenzie Tour schedule. If he plays well, the Burnaby native should be able to play the entire schedule. “I just felt more comfortable, this being my third time there,” Belle says of Q-School.

“I don’t know what really clicked, I just felt like I belonged there a little bit more. My game is in a better place overall. I have a new coach down in Phoenix who has helped quite a bit. The stuff we have worked on really helped me at Crown Isle and hopefully it helps me on the Mackenzie Tour.”

The only real stress Belle encountered at Q-School came in the fourth round. He played the first five holes of his final round in three-over par and suddenly dropped outside the top 14. “But I kind of regrouped and eagled No. 6 and as soon as my eagle putt went in I felt a lot more at ease. There was a lot of stress in that final round, but I am almost happy I played bad to start and I got through it. I know now I can do that in the future if I get off to a bad start or in a tough spot. I have the mental strength to get through that situation.”

Belle likes the way his game is trending. “I think tee to green, I would put my game up against anybody,” he says. “I have worked on my putting a lot and it is getting to be a strength, but it’s still not where I want it. My biggest strength is definitely off the tee. I hit it pretty long and pretty straight, which is kind of where the game is going, I think.”

The $200,000 Canada Life Open goes May 23-26 at Point Grey and Belle is starting to count the days. “I know Point Grey pretty well,” he says. “We used to have Zone 4 events there for junior golf and I played a few amateur events there. I am a little bit anxious to get started, but once I am out there I will be fine. It’s just golf.”

Last Year's Champion At Point Grey (Then The Freedom 55 Financial Open), Jordan Niebrugge, Also Had A Local Caddy, Albeit Not His Father. Nigel Colclough, A Member At Pitt Meadows GC Carried The Bag For Niebrugge In His First Professional Win

His dad is also feeling a little anxious. While those surgeon’s hands don’t figure to be shaking when he hands a club to his son, Ralph Belle knows that he, too, will be feeling some butterflies. “I am an orthopedic surgeon and there is really nothing that gets me nervous,” says the elder Belle. “But I will be very nervous. I think I can hide it very easily. Whatever help he needs or wants I will give him and that’s the way it is going to be. I am going to try and not be dad, I am going to be just a caddie.”

Belle is one of a number of players who will add a local flavour to the Canada Life Open. Sponsor exemptions have been awarded to Langley pro James Allenby, Point Grey Assistant Pro Clark MacPherson, former UBC standout Scott Secord of Calgary and Richmond amateur Chris Crisologo, who tied for 20th at Point Grey two years ago. “That was my first time competing in a pro tournament and I really wasn’t expecting much out of the week,” Crisologo said. “But that just kind of kickstarted everything for me and helped convince me the game was there.”

The Vancouver Golf Tour also has one exemption into the Canada Life Open that we be filled after this weekend’s Players’ Championship at Morgan Creek Golf Course in Surrey.

Riley Wheeldon of Comox, who was 21st on the Mackenzie Tour money list last year, David Rose of West Vancouver and Jared du Toit of Kimberley are among other British Columbians expected to be in the field at Point Grey.

CHIP SHOTS: The winner of the Canada Life Open will earn $36,000 and an exemption into next month’s RBC Canadian Open at Hamilton Golf & Country Club. . .Tickets are available at the gate for $15 or CLICK HERE to order online. . .Joel Dahmen, who won the Mackenzie Tour’s inaugural event at Point Grey in 2014, is playing in this week’s PGA Championship at Bethpage Black. . .Canada Life will award $2,500 to the Top Canadian each week on this year’s Mackenzie Tour and a $25,000 bonus to the Top Canadian at the end of the season.