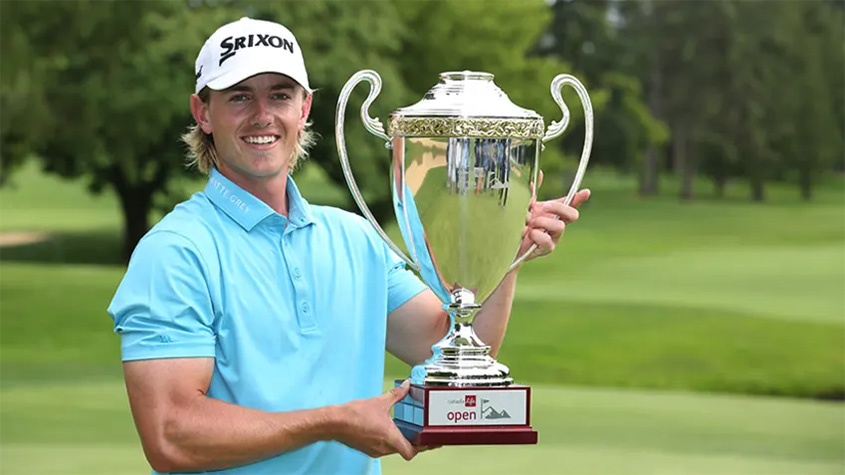 James Allenby knew it couldn’t last forever, this magical run he had been on where nearly all of his putts seemed to drop and the birdies came in bunches. The Langley native hoped he could squeeze out one more special round in Sunday’s finale of the $200,000 Canada Life Open at Point Grey Golf & Country Club and maybe change his golfing life in a big way.

A win in the season-opening event on the PGA Canada-Mackenzie Tour circuit would have paid Allenby -- who was playing on a sponsor’s exemption -- $36,000. It also would have made him exempt for the rest of the Mackenzie Tour season and earned him a huge bonus: a spot in next week’s RBC Canadian Open.

He came oh so close.

Allenby, suddenly without his best stuff, gutted out a one-under par 71 on Sunday, but could not hold off the hard-charging Jake Knapp of Coasta Mesa, Calif. Knapp closed with an eight-under par 64 to finish the 72-hole event at 21-under par. Allenby, who began the day with a three-shot lead, finished in a two-way tie for second place at 19-under par.

“I just had this overall sense this week that this was my time,” Allenby said after his round. “But it’s not and I am going to learn from it, of course, and be better for it. It’s a bit of a letdown, but I am not feeling bummed, I’m happy. It was a great event.”

Allenby seemed to be on his way to finishing off something of a Cinderella story out of nowhere. The 34-year-old, who has been chasing his pro golf dream for the better part of a decade, has no status on any of the ‘big tours.’ He has cleaned up on the Vancouver Golf Tour in recent years and posted some impressive scores along the way.

Allenby had been especially hot of late. He won a regional qualifier for the RBC Canadian Open at Kings Links in Delta earlier this month with a bogey-free seven-under 65. He followed that up with some amazing golf on the VGT, where he strung together scores of 61, 63, 61 and 64.

The hope was that Allenby could carry his hot play into the Canada Life Open and he did just that. He opened the tourney with a four-under 68, grabbed the lead with a nine-under 63 in Friday’s second round and added a five-under 67 on Saturday. Add it all up and Allenby was a combined 63-under par in his previous eight competitive rounds heading into Sunday’s final round.

A large gallery gathered Sunday to try and carry or will Allenby across the finish line. They shouted encouragement, roared when he hit good shots and groaned when one of his putts lipped out. But it became apparent early that this round was going to be hard work. Suddenly, nothing seemed to come easy. 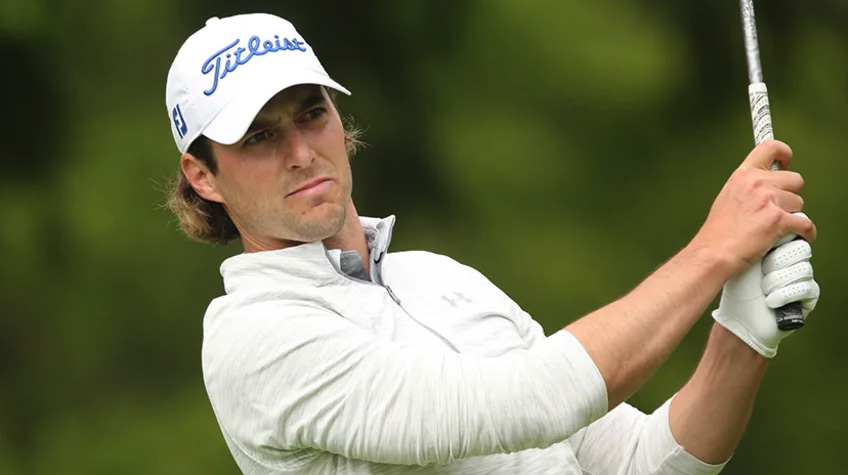 Allenby only managed to par Point Grey’s par 5 first hole, which he had manhandled in earlier rounds, and he bogeyed the par 3 second, which was his first bogey since Thursday’s opening round. He made another bogey on the sixth hole and by that time his lead was gone. He battled back on the back nine, but ultimately could not catch Knapp.

So many of those putts he was holing earlier in the week weren’t dropping on Sunday, when he had a handful of lip-outs. “You can blame it on putts but then again I made a lot of putts in the first three rounds,” Allenby said. “Most guys don’t make as many as I made. So today was a day where it just kind of cooled off a little bit. I didn’t really have the ball-striking to shoot a low score today that I kind of needed. It’s unfortunate I got beat. Any other week finishing 19-under par is going to do it, but not this week.”

A birdie on the par 4 15th hole gave Allenby life, moving him to 19-under par. But his chances of catching Knapp evaporated on Point Grey’s challenging par 4 16th hole, where his approach shot -- a 6-iron from 190 yards -- came up just short in a greenside bunker. “It just came out dead,” Allenby said. “I caught the shot a little bit on the heel and I thought when it was in the air it had enough to cover and was actually going to turn out real well. But in the end it was just a yard or two short and it was a really tough bunker shot. I thought I hit that bunker shot well, but it was a really tough up and down.”

After parring the 17th hole, Allenby needed an eagle on the par 5 18th to finish solo second at 20-under. He hit a spectacular second shot to inside 10 feet but his putt, which looked to be dead-centre, lipped out. “That was pretty much the story of my day right there, unfortunately,” Allenby said. “I hit a lot of really good putts that ended up lipping out.”

Allenby insists there are lots of positives he will take out of his week. For starters, he earned a cheque for $17,600 plus the $2,500 bonus Canada Life pays to the low Canadian each week. And by finishing inside the top 10 he earned a spot into this week’s Bayview Place DCBank Open at Uplands Golf Club in Victoria.

“I have good memories at Uplands,” Allenby said. “I think I’ve got two fourth-place finishes there. I really like that golf course. It’s similar to this one but the greens are a little flatter and I usually putt really well there as well. So I am looking forward to it.”

And trying not to think about what might have been.