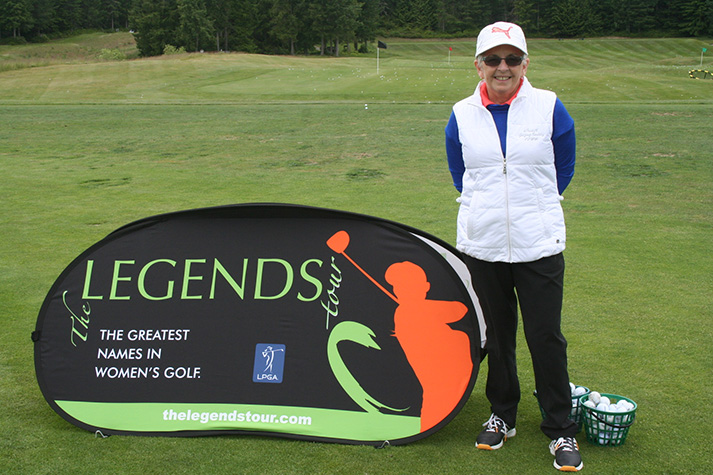 Procter, BC's Jackie Little Is Set To Tee It Up With The LPGA Legends This Week At White Horse GC As One Of Four Amateurs In The Suquamish Clearwater Legends Cup - Image Credit Bryan Outram

If ever there was an aptly named professional event for amateur great Jackie Little to appear in it has to be this one.

The LPGA Legends Cup taking place at the White Horse Golf Club in Kingston, WA this Friday and Saturday will feature several of the best known and accomplished LPGA stars over the last few decades.

With an amateur record that has her already in both the BC Golf Hall of Fame and the PNGA Hall of Fame, Little is looking forward to teeing it up with and against some of the players she looked up to as an amateur player growing up.

"Actually, I'm thrilled, it's really exciting," Little said of receiving the invitation to play amongst the pros in the Legends Cup.

"It's something I've never done before. I look up to all these players, a couple of them I've played against in amateur, Lorie Kane and Gail Graham, but also seeing, you know, Juli Inkster, Tammie Green...it's very exciting."

Washington native JoAnne Carner will be one of four LPGA and World Golf Hall of Fame members in the field for this year’s second annual Suquamish Clearwater Legends Cup presented by Boeing. Set for June 6-8, at the Suquamish Clearwater Casino Resort’s White Horse Golf Club in Kingston, Wash., the event is hosting The Legends Tour, along with four top area senior women amateurs.

Hall of Famers joining Carner will be Juli Inkster, Hollis Stacy and 2019 World Golf Hall of Fame inductee Jan Stephenson. Carner played in last year’s inaugural event and shot 77 in her opening round – two better than her age (79) at the time.

Thirty-six professionals will compete for a $200,000 purse. Defending champion Trish Johnson of Great Britain, who has three Legends Tour wins, will return this year hoping to repeat.

Lara Tennant of Portland, Ore., the 2018 U.S. Senior Women’s Amateur champion, will be one of the four amateur invitees playing for the Low Amateur Trophy along with BC's Little, Seattle's Leslie Folsom and Anita Wicks of Roseburg, Ore.

Little has played on so many big stages in the world of amateur golf and come out a winner so often it will definitely be an unusual feeling for her to be out there among seasoned pros. "You're the amateur, they're the professionals, you want to sort of...stay out of the way. It is a different ball game," the five-time BC Women's Amateur Champion said. 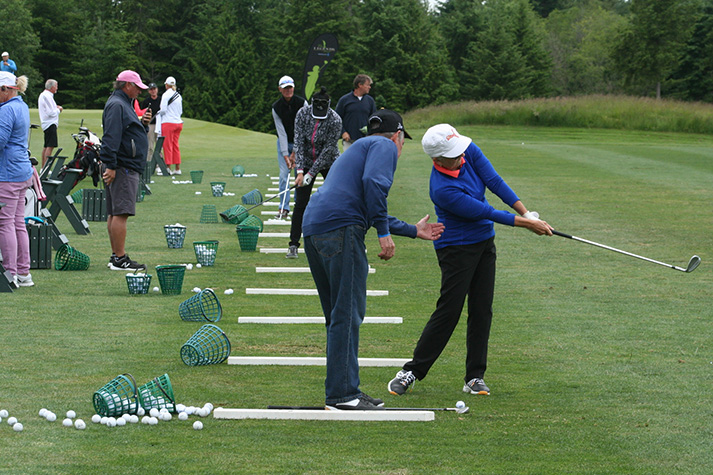 Jackie Little Gets Some Swing Advice From Her Coach/Caddy And Husband Pat On The Practice Tee At White Horse GC In Kingston, WA.

Little, who will have her husband and coach, Pat, caddy for her, did at one time give some thought to becoming a professional when she was younger. "When I was a teenager I thought about it a little bit," she said, "....but then...I was an only child and I wasn't sure about being away from my family and doing all that travelling. Then soon after, I got married and had a family and with all that in place, I'm happy the way things turned out."

She then added with a laugh, "I consider myself a professional amateur."

The pro-am is set for Thursday, June 6, followed by the 36-hole professional competition on Friday and Saturday, June 7-8. Tickets are $20 per day or $30 for two days. Kids 12 and under get in free.

Free public parking is available at Clearwater Casino Resort or Bayside Community Church and includes a complimentary shuttle directly to the golf course. Gates open at 10 a.m. on both Friday and Saturday, with tee times starting at 11 a.m.

For more info on The Legends Tour, visit TheLegendsTour.com .

To view free live streaming from the first tee for both rounds, subscribe to www.youtube.com/legendstour