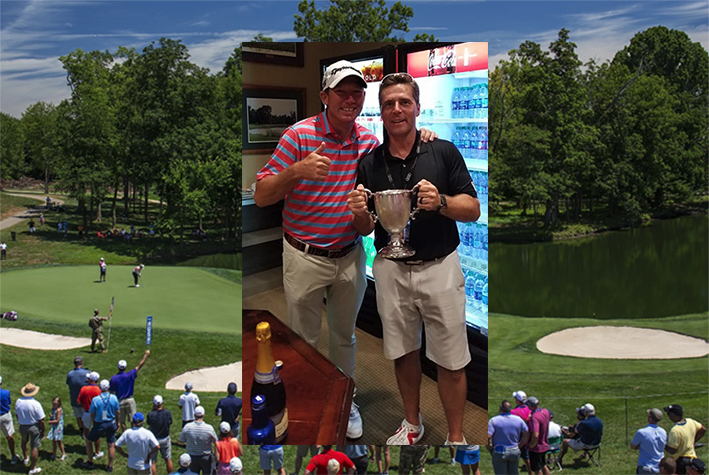 BC's Mike Darby Poses With Winner Jim Herman After Herman's Second Career PGA TOUR Victory, This One In The Barbasol Championship With Darby On The Bag - Images Courtesy Facebook

Ladner resident Mike Darby took some good-natured ribbing from some of his fellow PGA TOUR caddies after his recent win with Jim Herman at the Barbasol Championship in Kentucky.

The win was Darby’s third on the PGA TOUR. He had previously partnered with Abbotsford’s Nick Taylor to win the 2014 Sanderson Farms Championship and with American D.A. Points to win the 2017 Puerto Rico Open.

“The big inside joke on tour right now is me going for the opposite field Grand Slam,” Darby said with a chuckle in an interview this week. “If we had won in Reno last week I would have sealed it up. It’s either Reno or the Dominican Republic, so that’s my goal.”

Darby can laugh now because suddenly his professional life is good again. The win at the Barbasol came after he had weathered perhaps his most difficult year caddying on the PGA TOUR. “I hadn’t made a cut since November,” Darby said.

Herman had also endured a brutal year. He had missed 15 of 18 cuts heading into the Barbasol, an opposite field event held the same week as the Open Championship at Royal Portrush. “I thought maybe that’s it, maybe it’s the end and it’s time to accept it,” Darby said. “That’s what Jim thought, too, and then this happened.”

“I am going to pay some bills,” Darby said. “You know, this is one of the most expensive markets in the world to live in and we have a modest house here in Ladner, so we’ll put some aside for taxes and pay some bills and just be smart. There are a whole bunch of expenses coming up. Of course, when I first won with Nick I bought this and that, new wheels and exhaust for the car. We’re going to try and be smarter this time.”

Before hitting the jackpot in Kentucky, Darby hadn’t made a cut since November, when he caddied for South Korea’s Whee Kim. The pair tied for 10th at the Myakoba Classic, but Kim then missed six straight cuts and they parted company.

Darby had worked only sporadically since then. He did three events with fellow Canadian and good friend, Brad Fritsch, on the Korn Ferry Tour, worked the Dominican Republic tourney with John Rollins and caddied for South African Tyrone Van Aswegen at the RBC Canadian Open.

He hooked up with Herman at the John Deere Classic, where they missed the cut by a shot when Herman bogeyed the final two holes in Friday’s second round. “The poor guy,” Darby said. “You could just tell, he was so down on himself when he missed that cut. It shows what kind of guy he is, because in the parking lot he said, ‘Darbs, I am so sorry.’ He apologized to me. As always, I did my best to be encouraging. I said, ‘Jim, the game looks great, let’s get ready for next week.’”

Herman's Win Could Give Darby Some Meaningful Employment For A While. And Possibly A Trip To Maui In January.

Herman, using a new putter and grip and fresh off a recent round with his friend, U.S. President Donald Trump, opened the Barbasol with two rounds of 65, added a 10-under 62 on Saturday and then hung on Sunday with a two-under 70. "I remember holding the flagstick and raising my right arm in the air and walking off the 18th green thinking, I can’t believe this has just happened,” Darby said. “It is such a huge relief.”

Darby, who was born and raised in Richmond, began caddying back in 2005. He spent a few summers working on the Canadian Tour, graduated to what is now the Korn Ferry Tour and eventually onto the PGA TOUR.

He didn’t play golf himself until he was 19 or 20. He got quite good at the game and briefly considered turning pro before realizing that he wasn’t nearly good enough. He caught the caddying bug after looping for a friend at the B.C. Amateur Championship.

Darby is 43 years old, or as he likes to say, “I turn 44 at the end of December. I am two days older than Tiger Woods. He has done a bit better than I have.”

Darby and his wife Joen have a two-year-old son named Palmer -- and yes, that’s a golf reference. Joen was understandably thrilled about the win in Kentucky. “Finally, I am not the deadbeat anymore,” Darby said. “She has been my 'sugar mama' all year. She works very hard as a human resources consultant. She is brilliant at what she does. Without her, it would have been trouble paying the mortgage this year, that’s for sure.”

Right now, the future looks bright, or at least much brighter than it did a few weeks ago. He now has some job security, although that can be a tenuous thing for a PGA TOUR caddie. Herman has pledged to make Darby part of his team going forward.

“When I touched down in Vancouver at midnight Sunday night there was a beautiful text from Jim waiting for me,” Darby said. “It said 'be confident that you have got a job on Tour waiting for you' and how he is looking forward to Maui and the (Sentry) Tournament of Champions.”

The Maui event at Kapalua, with a big purse, small field and no cut, is a dream job for caddies. “How good is that,” Darby said. “That is a guaranteed payday for caddies. Every little bit helps. That’s an unwritten rule, the player and caddie go together even if it is for the one week.”

Darby worked the Maui tourney with Nick Taylor after their win at the Sanderson Farms, but D.A. Points did not take Darby to Maui the year he got into the field. “D.A. didn’t take me there, so I am bitter about that,” Darby said. “That’s okay, D.A. and I are still friends, but we disagreed on that part.”

Darby is now off until mid-September, when the new 2019-20 PGA TOUR season starts with The Greenbrier event in West Virginia. Herman’s win earned him a two-year exemption on Tour, but did not give him enough FedEx Cup points to crack the top 125 and get into next week’s playoffs.

Darby hopes he and Herman can go on a nice run next season. But he’s learned not to get too comfortable. “It’s a cut-throat business,” he said. “There are always Tour-winning caddies who have no job. And it is getting a lot harder. Some of these kids are bringing out their college buddies or family members and all that. The writing is on the wall and I have got to prepare for that now.”

But right now, Darby will savour win No. 3 and dream about a potential Grand Slam on the horizon.