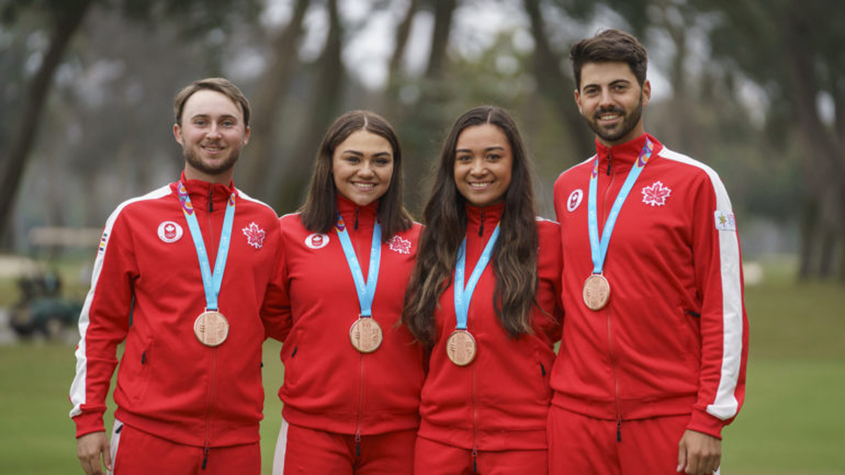 Delta’s Mary Parsons won a medal Sunday and came close to earning a second one at the Pan American Games in Lima, Peru. Parsons, Brigitte Thibault of Rosemere, Que., Joey Savoie of La Prairie, Que., and Austin Connelly of Lake Doucette, N.S., combined to win the bronze medal in the mixed team event on Sunday.

The Canadians finished with a team score of 552, just three shots behind the silver medalists from Paraguay. The United States took the gold medal with a team score of 544. “I think all four of us grinded out every shot to kind of get to where we are,” Parsons said. “We knew coming down the stretch we had to keep pushing because it wasn’t going to be over until it’s over.”

Parsons finished fifth in the individual women’s 72-hole competition at two-over par. She was five shots behind the bronze medalist. Parsons led the competition after firing a three-under 68 in the first round. She followed with rounds of 73, 75 and 70. Parsons, the 2018 B.C. Women’s Amateur champion, is about to begin her junior year at Indiana University.

HADWIN MOVES ON: The FedEx Cup playoffs will continue this week for Abbotsford’s Adam Hadwin, but the PGA TOUR season has ended for fellow British Columbians Roger Sloan and Nick Taylor. Only the top 70 players on the FedEx Cup points list after Sunday’s final round of the Northern Trust tourney in New Jersey advanced to this week’s BMW Championship in Chicago.

Hadwin, who tied for 43rd at the Northern Trust, fell five spots to No. 51 on the points list. He will need a big finish at the BMW to climb inside the top 30 and qualify for the season-ending Tour Championship.

AMATEUR HOUR: Richmond’s Chris Crisologo and Tristan Mandur of North Cowichan are among 10 Canadians who have spots in this week’s U.S. Amateur Championship in Pinehurst, N.C. The field of 312 players will be cut to the low 64 players after Tuesday’s second round of stroke play. Match plays begins Wednesday with the 36-hole championship match scheduled for Sunday on Pinehurst’s famed No. 2 course. Next year’s U.S. Amateur is being held at Bandon Dunes in Oregon.

Crisologo and Mandur both made the cut at last week’s Canadian Amateur Championship in Hammond Plains, N.S. Crisologo tied for 15th at five-over par, while Mandur tied for 64th at 18-over. Norwegian-born William Buhl of Fairhope, Alabama, beat the field by eight shots with a winning score of nine-under par. Coquitlam’s A.J. Ewart cracked the top 20, finishing tied for 19th at six-over par. Henry Lee of Coquitlam tied for 21st at seven-over, while Nolan Thoroughgood of Victoria tied for 23rd at eight-over.

TOP 20 FINISHES: Vancouver’s Stuart Macdonald and James Allenby of Langley both tied for 18th at the Mackenzie Tour’s ATB Financial Classic in Calgary. Allenby and Macdonald both finished at 10-under par. That was eight shots behind winner Hayden Buckley of Tupelo, Miss., who beat Sam Fidone of Lufkin, Tex., on the first hole of a sudden-death playoff.

Riley Wheeldon of Comox tied for 30th at eight-under, West Vancouver’s Dave Rose tied for 46th at four-under and Kimberley’s Jared du Toit tied for 60th at even-par. The Mackenzie Tour visits Winnipeg this week for the Players Cup.

Christopher Vandette of Beaconsfield, Que. won both the Junior and Juvenile -- for competitors aged 16 and younger -- championships last year. Vandette will be back to defend his Junior title this week.
The 72-hole competition runs Monday through Thursday. The Canadian Junior Boys Championship was last held in New Brunswick in 2006, when Abbotsford’s Nick Taylor won the title.

SENIOR No. 6: Victoria’s Jim Rutledge hung on to win his sixth PGA Seniors Championship of Canada. Rutledge began the final round with a three-shot lead but settled for a one-shot victory over Danny King of Aurora, Ont. “I’m sure glad we ran out of holes out there this afternoon,” Rutledge joked after his final round one-under 70. “Going into the back nine I hit some wayward shots, some miscues off the tee and the next thing you know I only end up winning by one shot.”

CHIP SHOTS: New champions will be crowned at this week’s B.C. Juvenile Boys and Girls Championships at The Meadows at Pemberton. The 54-hole competition for players aged 16 and under begins Tuesday. . .Kelowna’s Samantha Richdale tied for 35th at a Symetra Tour event in Milwaukee.