Abbotsford, BC's Nick Taylor Carded An 8-under 63 To Take The First Round Lead In The AT&T Pebble Beach Pro-Am - File Image

In a place where the pre-tournament storylines were all about Peyton and Eli Manning playing together and six possible NFL Hall of Fame quarterbacks playing (Eli, Peyton, Matt Ryan, Steve Young, Aaron Rodgers and Tony Romo), Abbotsford’s Nick Taylor went out, in relative anonymity on the Shore Course at Monterey Peninsula Country Club, to shoot a (-8) round of 63 on the par-71 track to take a two-shot lead after round 1 of the 2020 AT&T Pebble Beach Pro-Am.

Taylor started the day in a dream fashion, making eagle on the par-5 18th hole. His perfect day would continue with birdies at 15, 16, 1, 2 and then his final two holes, at 8 and 9. Taylor leads Patrick Cantlay and Chase Seiffert by two strokes. (Pebble Beach and Spyglass Hill each have a par of 72, so while Cantlay (Spy) and Seiffert (Pebble) both shot 66, they are at (-6).

Taylor hit a 4-iron approach on 10, 225 yards to a back tucked pin to get his day going, and ended it with two clutch iron shots, first a 5-iron to 5 feet for birdie at 8, and then on the long par-3 9th at MPCC, Taylor hit 3-iron from a back tee he didn’t even know existed to 20 feet before jarring his final birdie putt of the day.

“I drove it really nice today,” said Taylor after he was brought into the Pebble Beach media centre for an interview. “I hit almost every fairway. Tee to green was great.”

Taylor had a little added pressure, playing with TaylorMade president David Abeles, the amateur partner of Beau Hossler, and Taylor’s amateur partner Jerry Tarde, editor-in-chief of Golf Digest. “Dave’s a great guy. It’s always fun to play with the bigwigs,” Taylor said, adding he was pleasantly surprised to get the partner Jon Rahm usually gets (Rahm is not playing this week).

As for his partner, Taylor said he learned a lot from Tarde about the business side of golf. “It’s always fun meeting new people,” said Taylor. “I had a lot of time to ask him questions and I learned a lot.” Taylor said Pebble Beach is one of his favourite events for many reasons: As a Pacific Northwest native, rain doesn’t bother him, he grew up putting on poa annua, and since it’s on the West Coast, it gives his friends and family from the Northwest a chance to see him play.

And to show you how accommodating Taylor is, he finished his round on the 9th hole at MPCC, which is roughly 2.5 miles from the media centre at Pebble Beach. Taylor began his round at 9:39 a.m., finished around 3 p.m. and by the time he finished in scoring and was transported for his interview, it was past 4 p.m. And all he had to eat was what was in his golf bag, plus the handmade sandwich wife Andie gives him midway through his round.

Taylor certainly deserved a fantastic late lunch/early dinner after his heroic day at Monterey Peninsula on Thursday. Many of us missed Taylor’s great play because we were following the Superstar Flight at the AT&T Pebble Beach Pro-Am. These are the famous golfers who are grouped together so that fans can see their favourite athletes, musicians, comedians and movie stars. You know their Saturday rounds will be at Pebble Beach, meaning they will play their opening rounds at Spyglass Hill and Monterey Peninsula (Shore).

This year, the Superstar Flight of amateurs began at Spyglass Hill, with the majority of the famous going off the first tee. Starting with surfer Kelly Slater, who played in the same group as Canadian Adam Hadwin, you could then see former Dallas Cowboy and current CBS Football commentator Tony Romo and actor Josh Duhamel in the next group. Phil Mickelson was in the 3rd group, with his partner, former San Francisco 49ers quarterback Steve Young. Then there was Arizona Cardinals wide receiver Larry Fitzgerald, followed by singers Huey Lewis (of the News) and Pat Monahan (of Train).

I could have walked with any of these groups, but there really was no option when Luke Donald and Kevin Chappell were next, with their amateur partners Peyton and Eli Manning. Little brother is recently retired as quarterback of the New York Giants and he didn’t need reminding by his caddy on the opening hole who their real competition was (Peyton).

Eli played a picture-perfect 1st hole on the downhill par-5 at Spyglass. A long drive down the right side, a fantastic layup, solid approach and two putts later and Eli had made big brother look silly on their first hole. (Peyton played military golf, hitting his drive right, his second left, his third short, his fourth on before a two-putt bogey).

Peyton would get revenge on the next two holes, but with bigger crowds joining the Manning gallery, both brothers hit their drives way left on the picturesque 4th hole. Peyton never found his, going in-pocket on the walk to the green, while Eli continued up the left-side sand, finally giving up after a couple of choppy chips. By the end of the day, Eli and Chappell would finish at (-8), three strokes clear of Peyton and Donald (-5), so bragging rights, for day 1 at least, go to little brother.

After watching the Mannings play the par-3 5th hole, I doubled back to the second hole, where I had missed comedian Bill Murray, Green Bay Packers quarterback Aaron Rodgers, 2015 Miss America Kira Kazantsev Dixon and rapper Macklemore in the four groups playing behind Cooper Manning’s brothers. 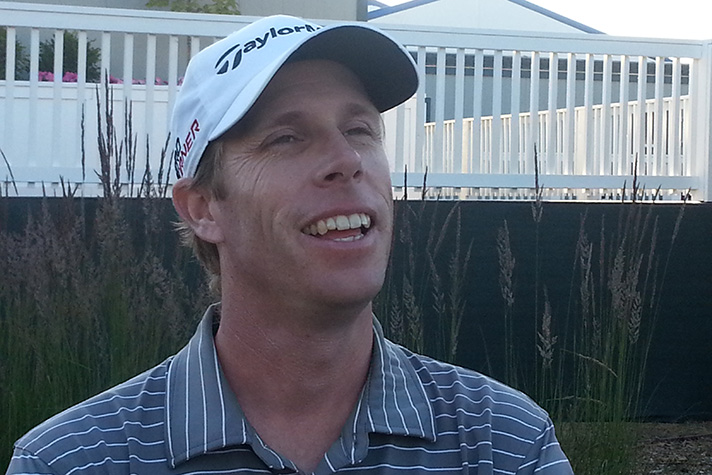 The 'Second Most Famous Athlete From Brantford, ON' David Hearn

But my timing was immaculate to see, for the fifth year running, the marquee group of U.S. Open champion Dustin Johnson, three-time Major winner Jordan Spieth, country singer Jake Owen and a retired hockey legend who everybody calls Doc, and his caddy, Jimmy, an old family friend.

Yup, Wayne Gretzky was back in the house, but his friends know him as Doc; only fans call him Wayne or Gretz. Poor Doc lamented that for his first five holes, he hit the ball as well as he can remember, yet he didn’t have one par to his name. On the uphill 6th hole at Spyglass, Spieth and his caddy Michael Greller were giving Gretzky’s caddy some grief after Doc hit two consecutive shots into fairway bunkers. “That’s too much work for Jimmy,” said Greller, who always like to tell a joke at Jimmy’s expense.

Johnson and Gretzky would end the day at (-5) on the amateur leaderboard. Doc also spent some time on the putting green talking to David Hearn, the second most famous athlete from his hometown city, Brantford, ON. Hearn who ended up shooting (+3) 75, was in a marquee group with his amateur partner, celebrity chef Thomas Keller of The French Laundry in San Francisco, and Kira Kazantsev Dixon, also known as Miss America 2015.

Missing for the second consecutive year is Baywatch actress and model Kelly Rohrbach, who married recently into the Walton family, of Wal-Mart fame. If you were watching Golf Channel coverage of this tournament, you might be wondering why you saw more of Canadian Mackenzie Hughes (+2) round of 74 than Taylor’s round. The simple answer is Hughes played at Pebble Beach where the majority of cameras are set up, while Taylor played at Monterey Peninsula, where there are just a fraction of the cameras available for coverage.

And that is also what makes the AT&T Pebble Beach Pro-Am the hardest tournament to cover each year on the PGA TOUR. Make a decision to go out to one of the courses to see some Superstar groups and there’s Taylor shooting his fantastic round at Monterey Peninsula, several miles away. Wake up early to go see Adam Hadwin open up the proceedings at Spyglass Hill and anything that happens at Pebble Beach might as well happen on Mars because you won’t be getting there in time.

Hadwin would finish at (+2) 74 for the day, while the fifth Canadian in the field, Ontario’s Michael Gligic, finished at even par 72 at Spyglass Hill. On the bright side, the weather has been fantastic, leading credence to Patrick Cantlay’s astute observation that weather comes in three year cycles at Pebble: One year is horrific (see 2019), one year is fantastic (this year), and the third is marginal (2021 TBD). Sunny, with just a little wind, the Monterey Peninsula is showcasing its supermodel qualities this week.

Also of note is former British Open champion David Duval, making a rare start on the PGA TOUR alongside amateur Richard Daly. Duval had a day to forget, shooting a (+12) 84 that has him in last place by a solid five strokes, behind Tim “Lumpy” Herron. Thankfully, Daly had a decent day, as their team shot (+2) 74, meaning Daly was good for 10 strokes for their team.