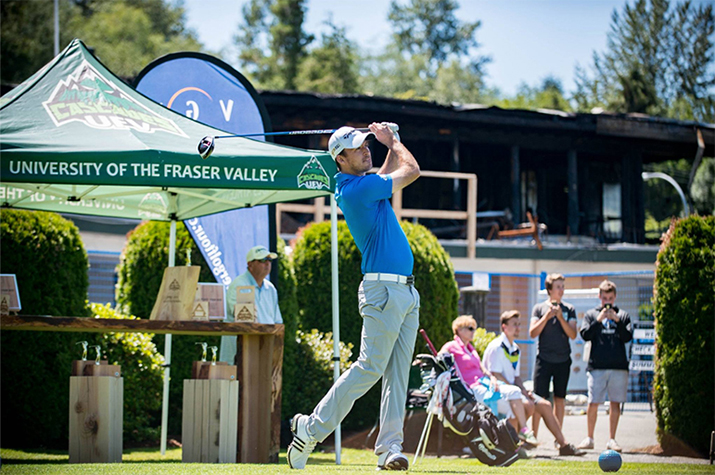 Abbotsford's Nick Tayler, Seen Here Teeing Off In A Vancouver Golf Tour Event At His Home Course Ledgeview, Is Leading By One Going Into The Final Round Of The AT&T Pebble Beach Pro-Am - VGT Photo

Nick Taylor has never played a round of golf with Phil Mickelson. On Sunday, at Pebble Beach, that will change, as Taylor tries to hold off the defending champion who is trying to add a sixth title at Pebble Beach.
“I’m sure I won’t be the crowd favourite,” said Taylor. “I just have to keep my head down, do my thing and keep playing, because I’ve been playing well.”

Taylor will be trying to win his second PGA TOUR event, with his lone victory at Sanderson Farms six years ago a distant memory. He’ll also be trying to go wire-to-wire, which won’t be easy, because chasing him is the Prince of Pebble Beach, an overwhelming fan favourite who shot a (-5) round of 67 to get to (-16) to pull within a stroke of Taylor, who shot a (-3) round of 69 at Spyglass Hill to get to (-17).

Taylor had a shaky start to his day, with bogies on 10 and 13, which caused him to fall out of the lead to Jason Day, playing in the group directly behind him.

But birdies at 17, 2 and 5 righted Taylor’s ship before he made eagle at the 7th to give him, at the time, a three-stroke lead. “I hit some good shots, capitalized on a birdie on 17 and putted great on the second nine,” said Taylor. “I made a long putt on the par-3 and hit a great 3-wood in for eagle on 7, so it was a great nine.”

Taylor and his group were the first players off the 10th tee at Spyglass, and unless you were actually there, you wouldn’t have seen any of Taylor’s shots on CBS. That’s because Saturday at Pebble Beach is all about the celebrities and the celebrities are all at Pebble Beach, all the easier for cameras to capture their unique swings.

Want to see Steve Young hit it left of left on the 4th hole? You’ll see that before you see Taylor’s game-changing eagle. How about the classy outfits of rapper Macklemore, who just picked up golf a year ago? Lots of coverage of that, but little of Day’s birdies which put him temporarily into the lead when Taylor faltered early on. Day is lurking just three strokes back at (-14), after his (-2) round of 70 at Spyglass.

It looks to be a three-man race for the title, as the next closest challengers are six strokes back. Undoubtedly the most dangerous variable to a Canadian celebration at Pebble Beach is the 49-year-old Hall of Famer who enjoys hitting bombs and dropping bombs.

Mickelson was playing before some of the largest crowds at Pebble Beach on Saturday morning, and like a pied piper, he kept on picking up hordes of fans ready to cheer him on to what they hope are back-to-back victories. There was nothing ordinary about Mickelson’s round. At the 7th hole, he put his wedge into the back bunker, which stunned Lefty to no end. “You’re kidding me,” he said to caddy Tim, his brother. “I thought I just knocked down the friggin’ stick.”

Mickelson would go on to make an all-world par after a fantastic sand wedge out of the deep bunker. Mickelson’s wedge game was on fire late in his round. After hitting his approach at 13 into a greenside bunker, Mickelson then proceeded to hole the 47-foot shot for birdie. One hole later, after seeing his approach to the par-5 14th spin back off the green, Mickelson chipped in for birdie as the crowds cheered for the so-called Stallion of Golf.

And then on 18, after hitting his drive, like a stallion to the left and past the iconic tree on the hole, Mickelson hit his second into the gallery on the right side, just short of the green. After getting a drop out of the wood chips, Mickelson hit a flop shot to just beneath the hole, which he converted for his sixth birdie of the day. He had just one blemish on his card, a bogey at the par-3 12th. But the story Sunday will be Taylor vs. Mickelson and all the inherent sub-plots.

One of the biggest things will be the rumoured appearance of Clint Eastwood at Pebble Beach on Sunday. Eastwood was scheduled to be at Pebble Saturday, but was a little too fatigued to make it. But that shouldn’t stop him from seeing what looks like a heavyweight battle on Sunday.

Taylor is confident because he has had success at Pebble Beach in the past. “A big thing tomorrow will be missing in the appropriate spots if I miss the greens and try to get up-and-down from there,” said Taylor. “The first seven is where you try to get off to a good start and hold on in the middle and push at the end. I’ll just try to draw back on my experience playing this golf course and just putting it in the right spots.”