Not The Retiring Kind 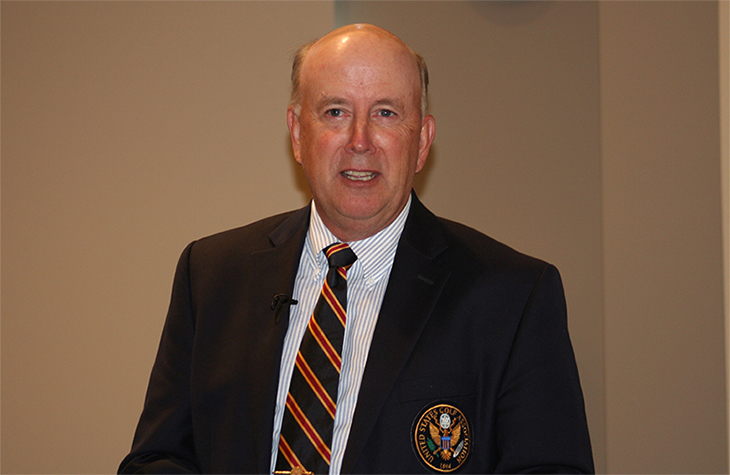 Every Golf Facility Throughout The Entire Pacific Northwest And B.C. Has Been Touched By The Hand, And Voice, Of Larry Gilhuly - Image Credit Bryan Outram/BC Golf

(As seen in the pages of Pacific Northwest Golfer magazine)

You can call it a farewell tour, or a thank-you tour, but whatever you call it, it wasn’t something Larry Gilhuly had planned.

After 36 years with the USGA Green Section, helping Northwest golf courses and their superintendents constantly adapt to changing landscapes and climates, both natural and political, Gilhuly retired in 2019 at the age of 67.

At one of their meetings, which over the years Gilhuly was a regular attendee and speaker, superintendent groups from British Columbia to Hawaii to the Dakotas said thank you with various honors and presentations.

“I wasn’t expecting that,” Gilhuly said. “It’s touching, but at the same time I had to pull my emotions out of it and just say, ‘Thank you, I really appreciate it.’ Otherwise I would be sobbing, and I’m not going to sob.” 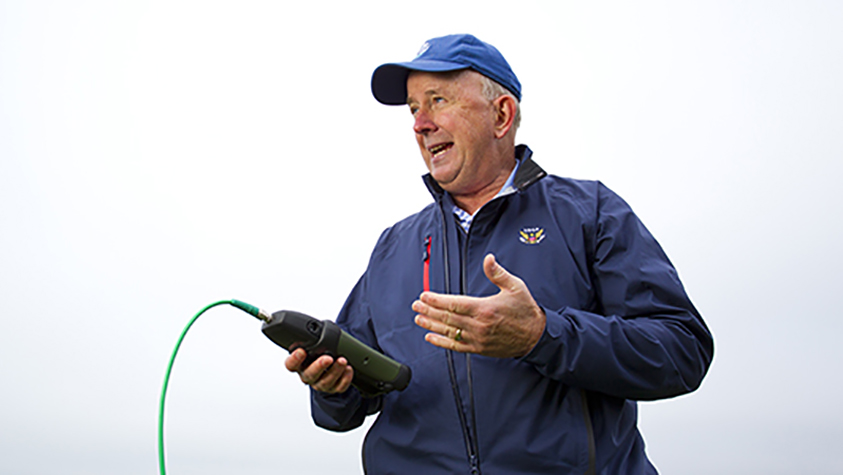 There was one such function, though, at a jam-packed Tufted Puffin lounge at Bandon Dunes, where his superintendent friends and a few past co-workers turned the tables on Gilhuly. Instead of the superintendents listening to words of wisdom from Gilhuly, they made him be quiet and listen to their stories, some of which were barely based on actual events.

Before the night was over and the large bar tabs signed off, stories had evolved to the point where Gilhuly was the reason for every men-only grill in North America to be shut down and why golf spikes made of metal and drivers made of wood have all disappeared.

“That was hysterical,” he said. “I really enjoyed that.”

His buddies found a fun way to pay tribute to a man who would take up a worthy cause, and stick with it until the game of golf was better for that effort. Early on it was going with soft spikes to help golf courses and their superintendents, then it was a drive to cut down unneeded trees that made growing turf difficult. Now, it’s championing forward tees, both for the enjoyment of players and to help superintendents keep costs down.

“For 36 years, what I tried to do every year was find one topic,” he said, with GPS sprayers and robotic mowers being in the mix lately.

While he enjoyed listening to all the abuse hoisted upon him that night at Bandon Dunes, he wasn’t about to apologize for any past overzealousness. 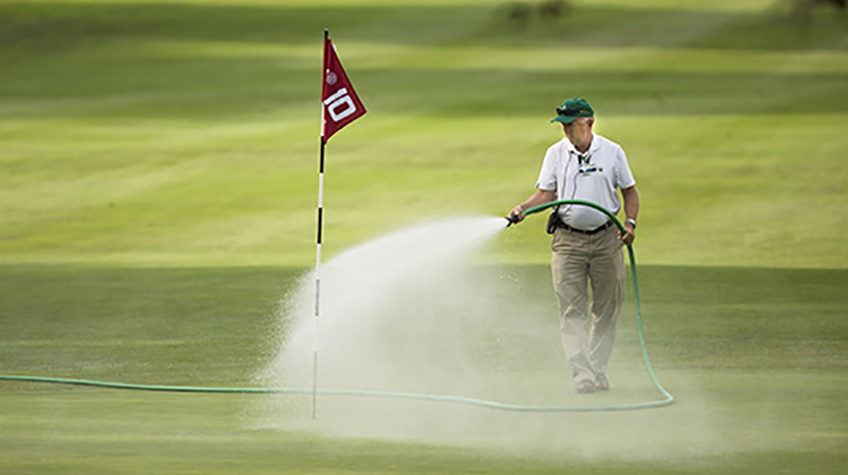 Always A Superintendent To The Core, Gilhuly Hand-Watered The Greens During The 2015 U.S. Women’s Amateur, Held That Year At Portland Golf Club. (copyright USGA/Steven Gibbons)

“You need to lead when you’re in the USGA,” Gilhuly said. “You can’t stand back. You’re supposed to be the leader of golf.”

Says John Bodenhamer, the senior managing director for championships for the USGA and the former executive director of the PNGA, “More than anything, he’s a great speaker and he loves the underdog. He genuinely cares about the game, golf course superintendents, the environment and would just give the shirt off his back to do the right thing about all of that.”

The latest issue that bubbles Gilhuly’s passion is forward tees. With his USGA resources, he can produce charts and graphs showing how golfers should move up to appropriate tees, and how golf courses need to make sure those forward tees are available.

He will continue preaching that issue even though he’s retired from the USGA. He has started Larry Gilhuly Consulting, and will continue, on a limited basis, course agronomic visits and sharing his knowledge with various groups of golfers.

“Now I would rather get in front of a membership that doesn’t think it needs forward tees and show them the data and watch them change before my eyes,” he says. “That’s so much fun. I’ve written about it for 20 years and now that I see it happening it’s very fulfilling. And I have the tools to tell people.”

Some of the tools are the charts and graphs with a lot of data supplied by the USGA and his own research. But another tool is his own ability to communicate with others.

“It’s tough to make turfgrass fun, but he made it compelling and it was really good,” said Bodenhamer, who almost always had Gilhuly on the agenda for the annual meetings of the PNGA or Washington Golf. 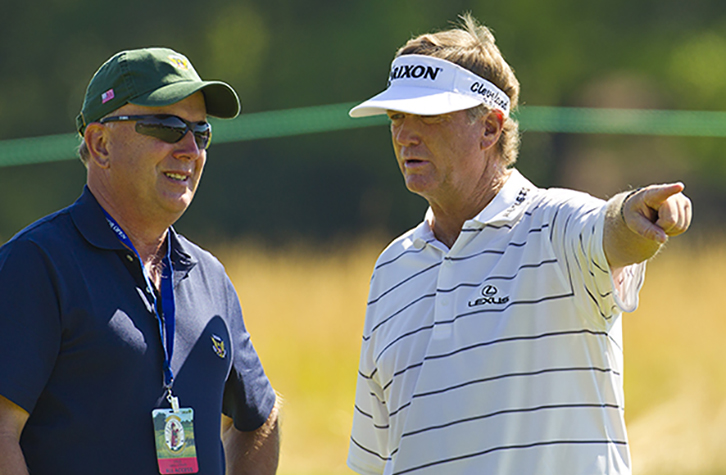 Sure, Gilhuly took public speaking classes at his beloved Washington State University (transferring there after not enjoying the University of Washington all that much for two years). But some of his speaking talent came naturally, passed along from his father who was a police officer in the Kelso area of southwest Washington.

“It was my dad,” Gilhuly said. “He’d go on boat tours, big ships, and he would get up and tell jokes, and he was good at it.”

Some thought Gilhuly’s pursuit of golf as a youngster growing up in Kelso was a joke. He fell in love with the game early, again following his father’s footsteps, but this was the late 1960s and golf wasn’t any kind of marquee sport. In the fall at Kelso High School, he once ran cross-country, mostly as something to do. He did better than most expected, and when the coach talked to him about running the mile or the two-mile for the track team in the spring, he had other ideas – namely golf. The track coach wasn’t too thrilled.

“‘Well, mark my words, Gilhuly, you’ll never do anything in golf.’ And I never forgot that.’’

Well, that coach was wrong on two counts. Besides the career in golf agronomy, Gilhuly also has spent most of his life hovering right around a scratch handicap or better.

While studying in the turfgrass management program at Washington State, Gilhuly worked two summers on the maintenance crew at Broadmoor Golf Club. After graduating, he interviewed for an assistant position at Seattle Golf Club, still sporting his long hair and goatee from being a typical college student.

“First thing I said is this (the hair) will all be gone,” Gilhuly remembered. “That was a good ploy on my part.”

After nine years at Seattle Golf Club, Gilhuly was pushed toward the USGA Green Section job by his friends and mentors. All agreed it was a good fit.

“I didn’t miss getting up early in the morning; I was not a morning person,” he said about the role of a superintendent. “What I did miss was my son was three, and I would take him out in the evenings when I was watering, have him on the cart with me. That I missed.” 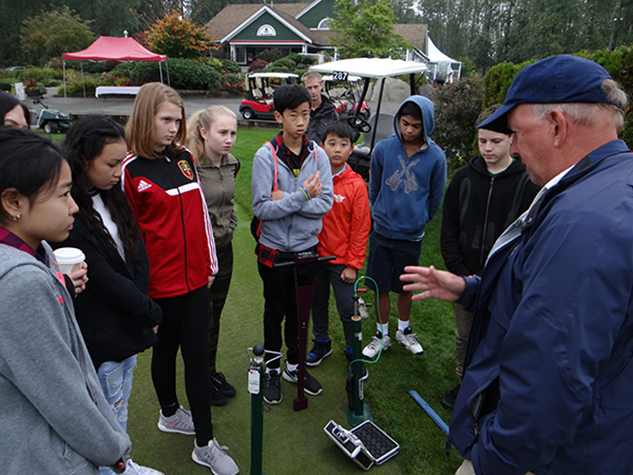 With wife Peggy, whom Larry credits with tremendous patience during a 36-year career in which he would spend roughly 100 nights a year on the road, and son Ryan and infant daughter Ashleigh, the family left its native Northwest and moved to the Los Angeles area to start this USGA career.

“I remember Peggy was in tears when we landed,” he said.

After a few short years in the southland, the family was able to return to the Northwest and Larry became ingrained in the region’s golf community.

“I’ll tell you, any time I needed him as an advocate or as a speaker, he was always there,” said Bodenhamer. “You just have to admire that about the guy.”

Northwest superintendents have been doing that for decades.

Paul Ramsdell has been a career-long journalist working at various times with newspapers, magazines and ESPN.com. He currently is the executive director of the Northwest Turfgrass Association.