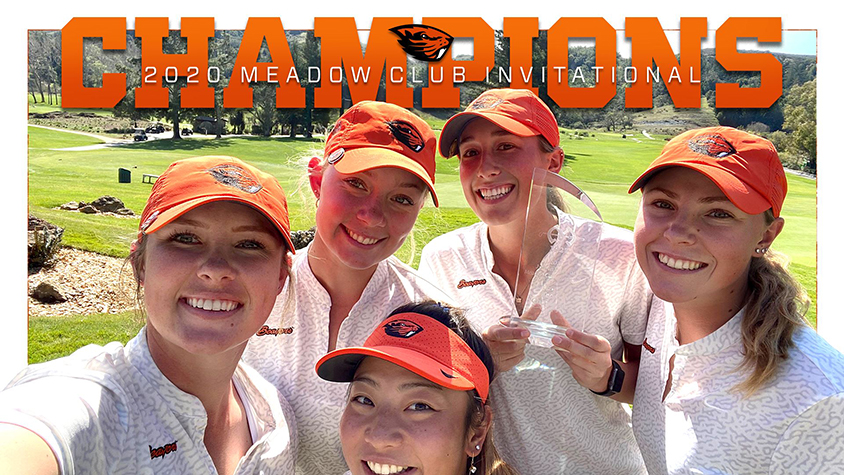 FAIRFAX, Calif. – The Oregon State women's golf team rallied in the final round of the Meadow Club Invitational on Tuesday, March 10th to win its second title of the season. Senior Nicole Schroeder and freshman Issy Taylor both fired a 3-under 69 in the final round to lead the Beaver charge and help the team post a 4-under 284 effort on the day.

It's the 14th team title in program history and the fourth for Dawn Shockley in her fourth seasons as the Beavers' head coach. Oregon State won the Cougar Cup in Pullman, Wash., this past fall.

"We are really proud of the way the team played today," Shockley said. "This is truly a team win with all five players finishing in the top 20. We had great individual meetings with each of the players yesterday and they made the adjustments needed in their games today and it showed through in their results.

Senior Mari Nishiura led the Beavers on the individual leaderboard, finishing in a career-best fifth place with an even-par 71-72-73--216. Her best previous finish at Oregon State was a tie for 11th place as a sophomore at the Westbrook Spring Invitational.

The great final round by Taylor moved her 13 spots up the leaderboard and into a career-best seventh place with a 2-over 74-75-69--218. She finished in a tie for eighth place at her first collegiate event, the Cougar Cup with a 4-under 212.

Schroeder, who has had several low rounds in her career, vaulted 29 spots up the leaderboard to finish in a tie for 18th place with a 7-over 78-76-69--223. She was equaled the lowest score in program history, a 6-under 66, two times and now has shot 20 sub-par rounds.