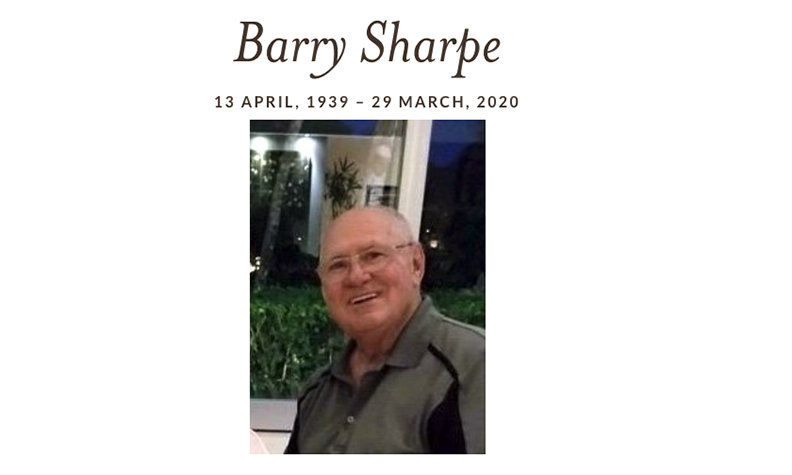 British Columbia Golf would like to extend our sincerest condolences to Anita Sharpe and the entire Sharpe family upon learning of the recent passing of Anita's husband Barry, on Sunday, March 29th.

Barry Sharpe was an integral part of the golf media community for many years and a major contributor when it came to covering golf at all levels and those involved in and around the game.

Please find below the words of Barry's wife Anita honouring her husband and his legacy.

On Sunday, March 29, 2020, Arthur Barry Sharpe, my best friend and loving husband for 40 years, passed away at the age of 80 in Chilliwack BC.

He is survived by me, his wife, Anita Sharpe (nee Jenkins) and his son Scott Sharpe and 3 grandchildren, many brother and sister in-laws, nieces, and nephews. Barry is predeceased by his parents Arthur and Florence Sharpe and his son Todd Sharpe.

Born April 13 ,1939 and being raised in Leaside, Toronto, ON led to his love of hockey including skating on the ice-packed streets as his training ground. Studying at Appleby College in the hockey program developed his skills on ice as goalie and led serendipitously into his career as an accomplished news and sports radio broadcaster and journalist. He was heard in Toronto, Kingston, Brampton, Welland, Chatham, Windsor, Kitchener, Hamilton, St. Catherines, Niagara Falls in Ontario, and Vancouver B.C.

His gift and passion to hear and relay stories lives on and is fondly remembered with his signature voice.

Barry’s golf and golf news continued on the west coast as the news and sports radio announcer with CKNW. Between 1980 and 2015, Barry envisioned and produced the West Coast Golf News television series and BC Golf News website. At the end of golf tournament’s, he could be found pressing through spectators to locate and interview the winner to get his ‘scoop’, rushing home to publish the events before anyone else.

His faithful walk with our Lord Jesus Christ transformed his life from 1995, built on Bible verses John 14:6-12 and John 3:16, led him to develop the Christian Athletes My Story, www.thechristianathletemystory.com, radio program with his co-producer, and continues to be heard today. He volunteered joyfully with Mission Fest Vancouver.

Celebration of life will be scheduled in the future. Memorial information, in the meantime, is located on the website where comments, memories, and pictures can be shared: Woodlawn Mt.Cheam Funeral Home, www.woodlawn-mtcheam.ca

In lieu of gifts and flowers please consider supporting a “charity of your choice” in Barry’s memory.