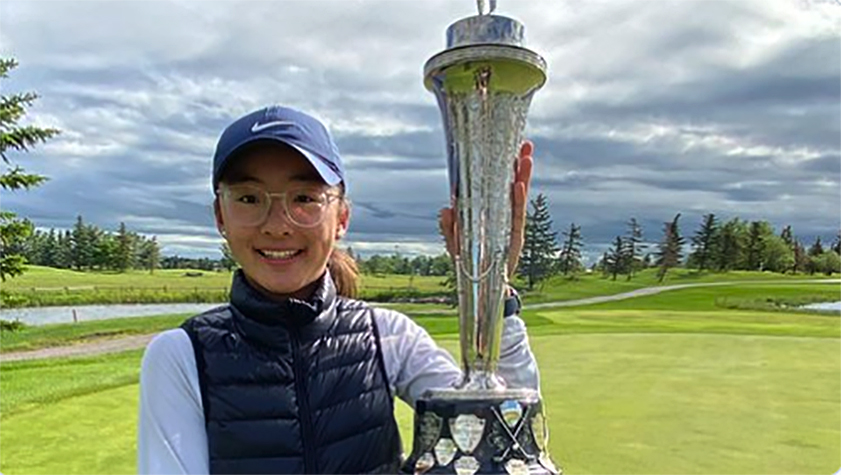 Yeji Kwon says the COVID-19 pandemic has given her more time to practice and all that hard work paid off for the 14-year-old from Port Coquitlam who this week won the Alberta Ladies Amateur Championship.

“With school being out this spring for COVID I got a lot of practice time in,” Kwon says. “We would practice every day, sometimes from morning to night.”

It wasn’t all golf as Kwon had school work to do to complete Grade 8 at Summit Middle School in Coquitlam.

Kwon topped the field at the rain-shortened event at Lakeside Golf Club in the Calgary suburb of Chestermere. The 54-hole event was cut to 36 holes after the course became unplayable.

“The weather was really bad,” she says. “The first round it rained a little bit. The second round was way worse, it really came down hard and it was really windy. I had to do lots of thinking about club selection because of the weather.”

Kwon shot rounds of 70 and 74 to finish at two-over par. She edged National Amateur Team member Noémie Paré of Quebec by one shot. Kwon credited her putter with helping her win the event. “I personally think my putting was really good,” she says. “Some of my first putts weren’t the best, but I was able to save a lot of pars with my second putts. I didn’t putt quite as well the second day.”

Kwon had mixed feelings about Wednesday’s final round of the tournament being washed out. “I kind of was disappointed because I just wanted to get to know more people and play because we came a long way to get here. But I am happy with the result.”

Kwon is coached by her mom, Misun, who is a CPGA Class A pro at the Lago Golf Academy at Westwood Plateau in Coquitlam. Kwon says she exceeded her expectations in Alberta. “Before the tournament our goal was to place in the top five,” Kwon says. “I never thought I would have been able to place first. Our goal was to stay calm and focus on the game.”

Academy owner Patrick Lago, who occasionally works with Kwon, was not surprised to see her play so well in Alberta. He expects more wins in what he envisions as a very bright future. “Her work ethic is unbelievable,” Lago says. “She is very passionate about wanting to compete at the highest level, so she knows what that takes. She is really addicted to training hard and bettering herself. If she could be here all day, every day she would and a lot of the time she is.

“She hits it pretty far and her ball-striking is phenomenal. She hits it off the centre of the face without even having to try. She hits her driver 250 yards consistently which is pretty impressive for a little girl.”

With most of the local junior tours shut down until recently because of the pandemic, Kwon played some this spring on the Vancouver Golf Tour. She has worked especially hard on her mental game. “My mom has helped me with my mental game,” Kwon says.

“It used to be if I hit a bad shot in tournaments I would kind of have a bit of a mental breakdown, and that really hurt my scores. But at this tournament and a couple of others I have focused on staying as positive as possible and accept every shot that I make. I just tell myself it’s okay and I can make it up if I focus because there are still many holes left.”

Kwon plans to compete at the B.C. Juvenile/Junior Girls Championship later this summer at Cowichan Golf Club. She is also looking forward to the B.C. Bantam Girls Championship, which goes Aug. 18-19 at Mount Brenton Golf Course in Chemainus. “I think I placed third in that last year,” she says. “This year I really want to win because it is my last year as a bantam.”