BC Golf Museum's Opening 'Salvo' Was Fired By Kelowna's Dave Barr In May 1989. Now, New Members Are Being Sought To Help The BC Golf Museum Continue Its Work In 'Preserving This Province’s Rich Golfing Heritage' - Image Courtesy BC Golf House Society

British Columbia golf courses may be full these days, but the same can not be said for the B.C. Golf Museum coffers.

While the COVID-19 pandemic has helped create an unprecedented demand for tee times, it has also effectively eliminated a significant chunk of the money raised to operate the museum.

The Tradition, the B.C. Golf Museum’s annual fund-raising tourney, had to be cancelled this spring due to COVID-19. Museum curator Mike Riste also lost all the revenue raised by his popular hickory shaft exhibitions at charity events all over the province that have also been called off this summer.

In a good year, The Tradition raised between $25,000 and $30,000 and Riste was hoping his hickory tours -- where participants in charity tournaments play one hole with hickory-shafted clubs -- might have raised $10,000 this summer.

Considering the museum operates on an annual shoestring budget of $80,000, the loss of those two sources of income is substantial. “Oh god, yes,” says Riste. “We don’t have any revenue this year. We are relying strictly on donations and memberships.”

Memberships to the golf museum are cheap. They go for $25 a year, probably less than half of what most of us are paying for a green fee this year. “I would say we have about 500 members,” Riste says. “My newsletter goes to 3,000 people in our database and that is always increasing.” (ed. note - Members also have first chance at playing in next year's Tradition event at Capilano GC)

Riste stresses that the museum is not in jeopardy of closing. A grant from British Columbia Golf covers about one-quarter of the annual operating revenue and the museum has managed to accumulate a small 'rainy day' nest-egg.

Riste, one of the museum’s founders, is a golf historian who has devoted his life to the museum, located in what was the former University Golf Course clubhouse at the corner of Blanca and West 10th in Vancouver.

Riste is particularly missing running his hickory program this summer as he found it an excellent way to connect with serious and not-so-serious golfers all over the province.

“I had set a goal this year to raise $10,000 in the hickory program and had booked just under 20 events,” he says. “It was going to be a busy summer. I love running the hickory, I just love it. Looking at it from a marketing perspective, it was the best way to put the museum in front of the golf community and the other community who plays in these charity events and may only play three or four times a year. 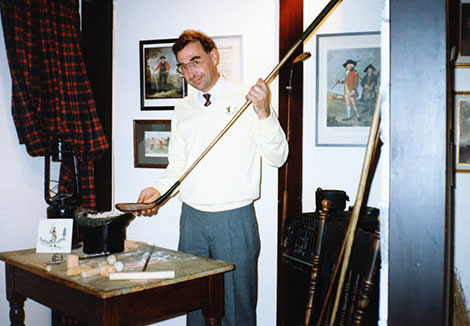 “I could be in a supermarket, I could be on Hastings Street, I could be anywhere, and it would be like, ‘oh, you are the hickory guy.’ It was instant. People loved it, they remember it. Usually at every tournament someone would say, you know, we have some old clubs at home, do you want them? Or we have some books or we have this, do you want them and I’d say 'yes, absolutely.' It was a way of getting donations, a way of connecting.”

Since opening its doors in May of 1989, the museum has amassed an impressive collection that includes about 6,000 books and a huge number of clubs. But Riste notes the museum is much more than old clubs and books.

“I woulds guess we have an artifact from over 50 different categories of collectibles,” he says. “And I really like that. We have original sheet music from the original play on Broadway in the 1920s dealing entirely with golf. We have an enormous postcard collection. That was always the goal. It wasn’t a museum for just golf balls and clubs and books. It has something for everybody.”

Riste has other concerns besides just the loss of much of the museum’s 2020 fund-raising revenue. Its lease expired on May 31 and he’s hoping there will be no surprises coming his way from the Musqueam band which owns the course.

Since its inception, the museum has not paid any rent for use of the old clubhouse. “We pay full insurance on the building, we pay a small tax of $500 a year, but we had to maintain it as if we owned it,” Riste says.

“Anything goes wrong, we have to fix it. Two or three years ago we raised the money and put a $55,000 roof on it. That was the agreement. You want to paint it on the outside, you paint it. Everything is your responsibility. That was the arrangement right up until May 31.

“Hopefully we get a new sub-lease at a reasonable price. We are sitting on pins and needles.”

Despite its current challenges, Riste remains confident about the museum’s future and is proud of its accomplishments. “The major accomplishment of the golf museum -- and people think I am crazy when I tell them -- is that of all the provinces in Canada and all the states in America, because of the golf museum, I believe this province and its golf clubs are more aware of their history than anywhere else on this continent. I really believe that.”

Kris Jonasson, chief executive officer of British Columbia Golf, hopes more golfers will step up and help support the museum. “I think the museum’s value has never been more apparent than it is today,” Jonasson says.

“It seems like every year we have more golf clubs that are celebrating a centennial or anniversary of some type and if you don’t understand your history you don’t really know where you are going in the future.

“The museum is the storage for everything that has happened in golf. There are so many wonderful stories and clubs don’t really think about it until a major anniversary is coming up and then they all of a sudden panic and say we have been around for 100 years, what happened? If they don’t have the museum, they don’t have the ability to go collect those records.”

If you would like to become a golf museum member and help support its work preserving British Columbia’s rich golfing heritage, visit bcgolfhouse.com.