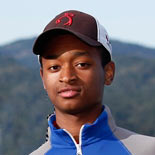 Sixteen year old Alex Francois of Burnaby, BC advanced to the Monday qualifier stage of the Canadian Open on Monday.  Francois was one of eight players who qualified, with 3 other BC residents - Adam Cornelson of Langley, Kevin Stinson of Mission and Ryan Williams of Vancouver playing at Marine Drive Golf Club.

Francois is well known in BC golf junior circles.  He captured the 2014 CN Future Links Pacific Championship and was the winner of the 2013 BC Juvenile Boys Champiionship, seven strokes ahead of the second place finisher.  His sister Sumie also won the 2013 Juvenile Girls event.