So that’s two foursomes and . . . judgment, I guess you’ll have to play as a single. Just kidding, of course. You may have heard of First Tee. If you have, you probably know about the program’s nine core principles that it uses to help instil good values in young golfers learning the game of golf. And if you aren’t familiar with First Tee, you soon will be as it is coming to a community near you.

First Tee has just started, or is re-starting, its operations in British Columbia. There had been a First Tee chapter in Vancouver affiliated with the YMCA. That chapter has closed and been incorporated into what is now known as First Tee - British Columbia. It has the considerable resources of Golf Canada behind it. First Tee is replacing Future Links as Golf Canada’s junior golf activities brand.

Shayain Gustavsp is the manager of First Tee - British Columbia and she’s excited about the prospect of reaching kids throughout the province and impacting their lives through the game of golf. Gustavsp, a LPGA-certified golf coach who spent more than a decade working in the professional sports world, sees a lot of herself in many of the kids she hopes the First Tee will touch in the years ahead. “I am an immigrant,” she says, noting that her family came to Canada from Pakistan when she was just seven years old.

“So golf was not on the radar,” she says. “It was whatever free sports I could do in PE and after school that I was quite involved in. So that was volleyball and basketball and tennis, whatever I could get my hands on that didn’t cost my parents any money. My mom joked that I lived in the gym when I was younger. Sports was my life.”

Gustavsp says she learned the game of golf by default. “I had sprained my ankle and I was out for about six months. I was a competitive volleyball player and at that time this lady who was a golf teacher understood my family’s financial restraints and had taken my younger brother under her wing and gave him an opportunity.”

"So now we have a program that gives every child the option and opportunity to do it. I am so passionate about it. There are times I wake up in the middle of the night thinking of different ways of how we can grow faster or generate more revenue. I am really into it.”

First Tee will reach children throughout B.C. in three different ways. Programs will be offered at golf courses, community centres and schools. Gustavsp is particularly excited about making golf available through schools.
“My whole thing is just like you learn basketball and volleyball in PE, we’ll now give kids access and opportunity to learn golf,” she says.

“Therefore it won’t be a foreign place to go to when they are older and become adults. It will be just like going to the public basketball court in their neighborhood. They will know where the public golf course is in their neighbourhood and no one has the fear, the tension, the anxiety that it brings just to step onto a golf course.”

Golf courses, in particular the golf pros who work at courses, are an integral part of the First Tee program. The PGA of Canada is a partner with First Tee in Canada. “They are a big part of this because there is only so much we can do in schools and community centres in the sense of growing the game,” Gustavsp says.

“The child needs that outlet to actually go and practise and see what that looks like in the playing field per se. If the golf courses want the next generation of kids to be members at their clubs and come and participate at their local golf course this is the next wave of kids that are going to do it.” 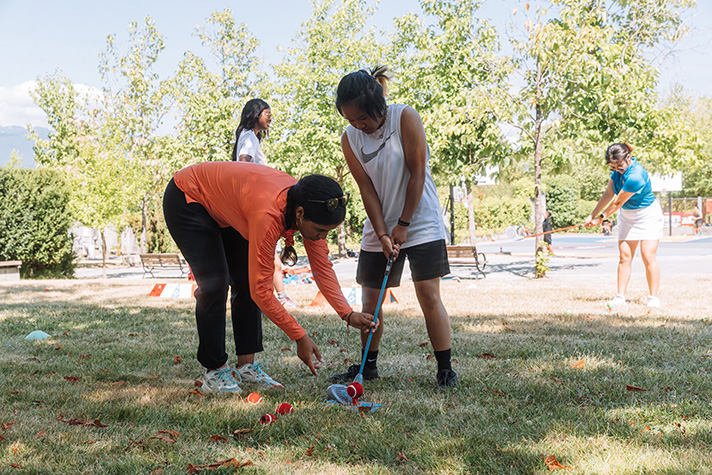 First Tee’s commitment to its nine core values is what sets it apart from other golf programs. Since its inception in 1997, First Tee has impacted more than 15 million young people through its character-building initiatives. Gustavsp knows she is inheriting a system that works. “I am not creating a program from scratch,” she says. “They have already been through all the ups and downs of what works and what doesn’t work. It has been streamlined in that sense.

“The whole point of the First Tee is about its nine core values. We are teaching a child essentially to be a good person, a good human being in society through the game of golf.” Gustavsp says she is a perfect example of how golf can help shape one’s life and provide some incredible opportunities.

“The game has opened global doors for me,” she says. “I worked for the Orlando Magic and played golf with NBA Hall of Famers. I went to Spain doing some contract work with LaLiga and I played with soccer team presidents and then to England where I used golf to entertain clients and close business deals. I know there are little Shayains out there coming from immigrant families that don’t see the light at the end of the tunnel. I am living proof that this game is for everyone.”

It is Ben Neumer’s job to help raise the money to make First Tee a success in B.C. Neumer is the development officer for First Tee - British Columbia and although these are still early days, Neumer is already seeing a positive response from private and corporate donors.

“We have already seen an influx of phone calls and inquiries through our website wanting to learn more on how they can get involved in introducing the game of golf to kids and youth,” he says. “We are hearing from people who already have a link to the game and a passion for the sport. They realize what it has meant to them.”

Doug Stewart, a longtime member of Marine Drive Golf Club in Vancouver, is a perfect example of that. Stewart, who won three straight B.C. Junior Boys titles back in the late 1960s, knows how the game helped shape his life and has encouraged fellow members at his club to support the First Tee.

When the former Vancouver chapter lost much of its equipment in a theft, Stewart and Marine Drive donated 19 sets of clubs to help replace much of that equipment. “We knew kids needed golf balls and I put a box in our men’s locker-room and I said I need educated golf balls,” Stewart says.

“They don’t have to be Pro-V1s, give me used ones, scuffed ones, as long as they are semi-round. So we dropped a box in there and we recently donated another 500 balls from Marine Drive members.

“I like to give back to golf because it has been such a big part of my life. The golf course is a great place for kids. It’s really a great sport for them to learn and discipline themselves for when they get older.”

More information on First Tee is available at firstteebc.ca.