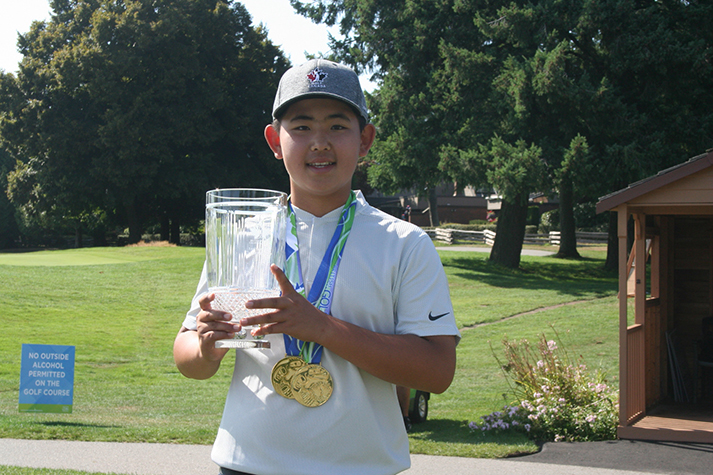 Former Canadian Tour winner Eugene Wong of North Vancouver and Surrey’s Adam Svensson, who is off next month to begin his second stint on PGA TOUR, are among the past champions of the B.C. Bantam Boys Championship.

Their play in winning those titles could not have been any more impressive than the performance of new winner Alex Zhang of Richmond.

After opening the 36-hole tournament with a three-under 68, the Beach Grove Golf Club junior member closed witha near flawless round of 67 on Tuesday to win the championship by eight shots at Langara Golf Course.

The win came on Zhang’s final day as a 12-year-old. He turns 13 on Wednesday.

He didn’t blow out any candles, he just blew away the competition. “Guess I’ll just eat a cake,” he said of his celebration plans.

Zhang began the day with a three-shot lead and served notice early that he was not going to be caught. He birdied the first hole, added another one on the third and by the time he made the turn Zhang had stretched his lead to eight shots.

Zhang’s final round included five birdies and just one bogey. “One was a 20-footer and rest were from inside 10 feet,” Zhang said. I just played really well. I hit it good both days and putted well.”

No one wins at Langara without putting well. The greens have some severe slope and you pay the price if approach shots land in the wrong spot. “It feels really good to win a provincial championship. It means a lot because I have practised so much and it’s nice to see that hard work pay off by winning a pretty big tournament.”

Zhang’s work isn’t done this week. He’s playing a CJGA event Thursday and Friday at Hazelmere Golf Club in Surrey. Zhang, who is heading into Grade 8 at Magee Secondary, has had an impressive summer. He made the cut at the Canadian Men’s Amateur Championship in Quebec, where he tied for 45th.

And the 67 he shot in the final round of the Bantam championship wasn’t even close to his career-low tournament round. Zhang said he fired a 64 in a tournament in Pinehurst, North Carolina two years ago. 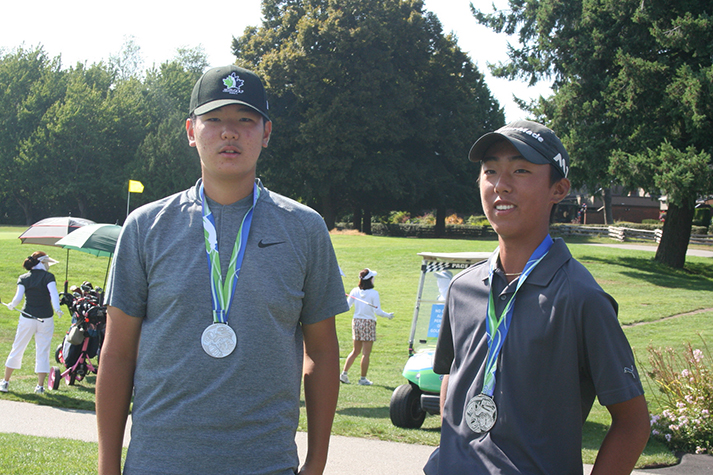 Eric Joo of Coquitlam and Hyunjun Lee of North Vancouver tied for second at one-over par. Both closed with rounds of one-under 70.

The Bantam Boys division is open to players aged 14 and under. A Novice Championship for players aged 12 and under was also held at Langara. Zhang won that title by 10 shots over Jeevyn Lotay of Burnaby.

Net better-ball and net Stableford competitions were also held. Emma Kim of Victoria won the Stableford event with a total of 81 points. Lotay was second with 77 points.

The better-ball competition was won by the team of Gordon Chen of Burnaby and William Jee of Port Moody, who finished at 17-under par. That was one shot better than the team of George Zhou of Vancouver and Harley Liu of Burnaby.

Next summer’s Bantam and Novice championships will be played at Shadow Ridge Golf Course in Kelowna.